Bitcoin has consolidated above $20,000, forming an ascending channel in the process. This makes it possible to expect upward movement from the channel's lower trend line toward $22,000 (the local low on 8 July 2022). If the price manages to overcome this level, it would be worth considering opening buy positions with a target of $27,200.

Analysts at Glassnode think that the US Federal Reserve's more dovish monetary policy due to the worsening economic situation could be a surprise for crypto markets, in general, and BTC, in particular. Markets are currently pricing in only an aggressive set of actions from the Fed, but it could turn out that with the regulator's softer rhetoric, the market could recover faster than many expect.

When BTC's price went down, USDT's purchasing power went up. In other words, more cryptocurrency can now be purchased with the same amount of stablecoins. A strong sign of potential growth can be found in the fact that stablecoins' market capitalisation continues to grow relative to BTC's. Stablecoin supply on exchanges is moving into an accumulation phase at the same time that we're seeing BTC outflows and a corresponding shortage. Data from Santiment indicate a two-year high for USDT supply and four-year lows for BTC supply. 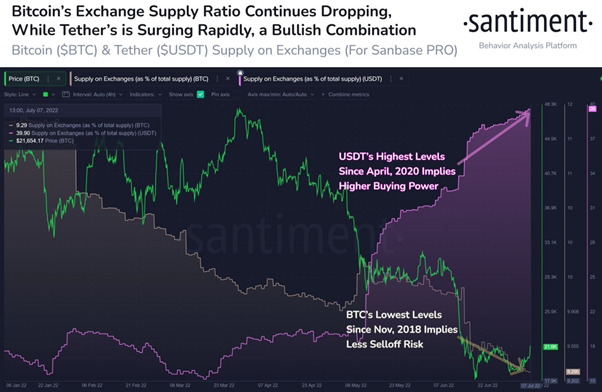 Fig. Bitcoin and USDT supply on exchanges. Source: Santiment
Use this idea

Previous article
Bitcoin: Where's the bottom?
Ends 19 Jul, 2022
Throughout the month, Bitcoin has maintained relatively stable positions, consolidating within the range of $28,000 to $32,000.
Next article
Cardano, front and centre
Ends 19 Aug, 2022
The cryptocurrency market is still under pressure, but positive news has begun to emerge for some coins. Cardano, which will launch its own algorithmic stablecoin, DJED, immediately after the Vasil hardfork is completed, could be in the spotlight.

Join StormGain — the most universal application for crypto. Buy, store, trade, exchange, earn and learn about crypto in a single tap.