The $20,000 level is a strong psychological support. If this level survives, Bitcoin could begin an active rebound to $25,280.

Bitcoin's price has fallen below the cost of mining, a position it's hardly able to remain in for long. Furthermore, large investors such as MicroStrategy have purchased the cryptocurrency at a higher average price and currently have significant unrealised losses. It's possible that they'll sell part of their bitcoins to avoid a margin call. In the short term, this may lead price of the crypto market's pioneer coin falling further. However, it's entirely possible that this dip will be bought up rather quickly.

As Bitcoin prices dropped, the network has seen many stablecoin transfers to cryptocurrency exchanges. Many market participants believe that Bitcoin is bottoming, which means that the current sell-off could be an excellent time to buy the cryptocurrency at a favourable price. The fact that there's an influx of rather large sums to exchanges indicates that whales are preparing to build up their BTC positions. 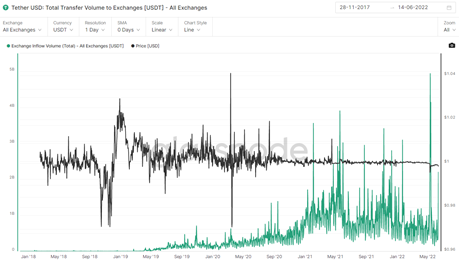 Historical data suggest that Bitcoin will soon hit bottom. The on-chain Mayer multiplier oscillator is around 0.55 (red circle), slightly below the March 2020 level (black circle) and almost identical to the 2018 level (blue circle) when Bitcoin began its massive rally. 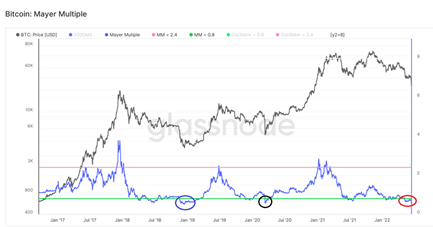 Bitcoin prices and the Mayer multiplier indicator (blue line). The oscillator assesses the extent to which BTC prices deviate from its 200-day simple MA
Use this idea

Previous article
Ripple has grounds for growth
Ends 15 Jun, 2022
Pessimism reigns over cryptocurrency markets, but Ripple has pretty considerable grounds to make back at least part of its losses.
Next article
Bitcoin. Ready to rise?
Ends 09 Aug, 2022
Bitcoin has shown its ability to recover and tested the $22,000 level. And there are other reasons to think about buying it.

Join StormGain — the most universal application for crypto. Buy, store, trade, exchange, earn and learn about crypto in a single tap.