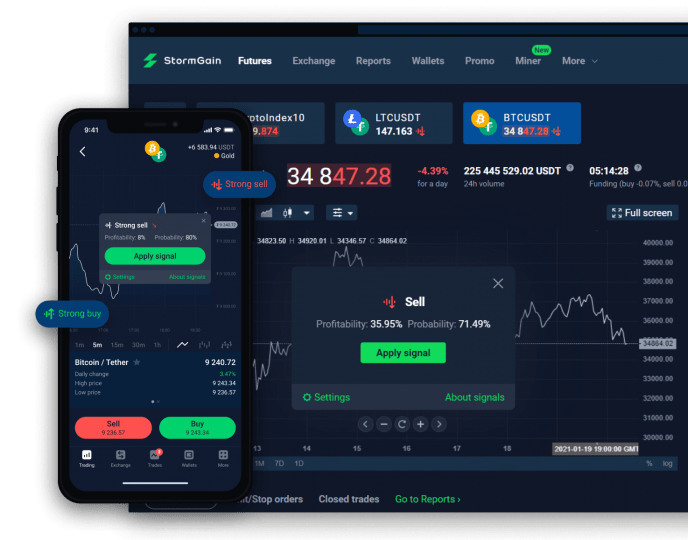 StormGain allows you to buy, sell and exchange Bitcoin SV using data from the live BSV price chart to inform your trades.

BSV is the native currency of the Bitcoin SV blockchain and was formed when Bitcoin Cash was hard-forked back in November 2018. It was created as another solution to the problem of small block sizes that first plagued Bitcoin itself. In 2017, Bitcoin was forked to create Bitcoin Cash, which has larger block sizes. However, as Bitcoin Cash became more popular, its network couldn't meet transaction demands. Bitcoin SV was forked from BCH with an initial block size larger than BTC and BCH/ It has a block size of 1 gigabyte, which is much larger than Bitcoin's 1-megabyte block size.

BSV price history began in 2018 when it started trading on exchanges at $200 before immediately crashing to below $100. In the same year, its price recovered significantly, making a yearly peak at around $250. In 2020, BSV had a surge of growth similar to the previous year. It hit a new high at $458 before crashing down again to find support around $100. Things were no different in 2021. During the bull run, BSV set a new all-time high at $491, then fell sharply and found support around $150.

Using the historical price chart, it may be easier to predict the BSV future price, but the most important factor for any token's continued existence is support of its network. If BSV continues to be supported, prices could rise higher in the future. To learn more about Bitcoin SV future price, check out our BSV price prediction here.

What affects the price of Bitcoin SV today?

How can I buy Bitcoin SV (BSV)?

To buy Bitcoin SV on StormGain, all you need to do is fund your account. You can do that in several ways:

Once you've completed your deposit, head over to the trading platform to buy BSV.

How to sell BSV

To sell Bitcoin SV, you first have to own the cryptocurrency by funding your account. You can do that in several ways:

Once you've completed your deposit, head over to the trading platform to sell BSV.

How to exchange BSV

StormGain is an easy-to-use platform where you can buy, store, trade and exchange cryptocurrencies. To exchange BSV, first make sure you have enough funds to exchange it. Navigate to the 'Exchange' window, select the asset you want under 'To wallet', then input the amount you wish to exchange under 'From wallet'. At the bottom of the exchange platform, you'll see a calculator that tells you how much your asset is worth and the commission fee.

How to start Bitcoin SV trading

To begin BSV trading on StormGain, fund your account with at least the minimum deposit amount. You can do that easily with your bank card or via a direct crypto deposit into your wallet. Once you confirm funds in your account, head over to StormGain's trading platform and select BSV from the list of instruments to begin trading.