The difference between Bitcoin and Bitcoin Cash

The date 1 August 2017 is very important for the entire cryptocurrency community because it marks the occurrence of the most anticipated Bitcoin hard fork that gave us Bitcoin Cash. There were many disagreements about its launch, but a vast number of Bitcoin users claimed that they wanted it. Why? BCH aimed to solve scalability issues.

Bitcoin Cash became Bitcoin’s most successful fork. Moreover, some services and groups even quit the Bitcoin blockchain and turned to BCH. Why is Bitcoin Cash so popular, and what is the difference between these two cryptocurrencies?

People began using cryptocurrencies more frequently in 2016. At the time, Bitcoin was very popular while other cryptocurrencies were almost unknown to cryptocurrency newbies. That is why everyone using crypto for the first time usually bought Bitcoin. This led to initial issues with transaction speed, so Bitcoin needed an upgrade.

The development team made a soft fork called SegWit, but almost nothing changed. As a result, some groups proposed increasing Bitcoin’s block size. Doing so could solve the problem, but the development team refused the proposition, claiming that such changes could lead to security issues. 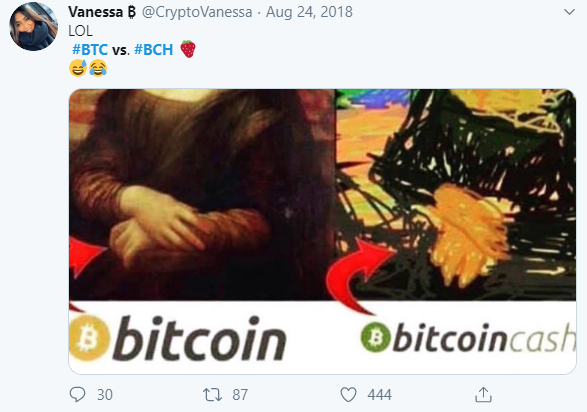 That is why many miners, developers and other members of the Bitcoin community wanted to leave it behind and make a hard fork. Seeing that there weren’t any other solutions, the Bitcoin development team gave a grant to these groups.

Some groups, brands and even exchanges recognized BCH before its launch. CoinEx was the first exchange that made BCH its main asset. On top of that, in January 2018, Block Explorer deleted Bitcoin and began supporting only BCH.

The hard fork almost split the cryptocurrency community into two groups. The first supported BCH and believed that the asset could replace BTC. The second didn’t recognize BCH, saying that it was ‘money from thin air’.

From the get-go, Bitcoin Cash performed very successfully on the market. On just the second day after its launch, its price rose by 100%. Within three weeks, it was valued at about $1,000. For a long time, it was the second-most-expensive asset after Bitcoin (until Maker launched). Still, its value wasn’t even worth half of Bitcoin’s.

The closing price for BTC and BCH at the end of the last three years.

There is only one reason for this: Bitcoin is “the father of cryptocurrency”. It was the first digital asset ever, so it had more time to get supporters. Everyone from teenagers to the elderly knows about Bitcoin, but not everyone knows about Bitcoin Cash. That’s why BCH hasn’t been able to replace BTC so far.

Bitcoin will always be the most expensive cryptocurrency

Bitcoin is the first digital asset that opened the world of cryptocurrencies. It was launched on 3 January 2009. For several years, it was almost unknown because its technology was incomprehensible to many people. Nevertheless, within several years, it became the most popular crypto coin in the world.

Bitcoin Cash launched on 1 August 2017, when almost the whole world knew what cryptocurrency was. There is an 8-year difference between these two cryptocurrencies, which is why BCH has some advantages over the BTC system. However, the BTC community is still bigger than BCH’s.

This was the main reason for creating BCH. As previously mentioned, BTC transactions became slower and more expensive. There were too many transfers, and the Bitcoin blockchain couldn’t verify them all because its 1 MB block size provided low bandwidth.

Bitcoin’s block size can verify a maximum of 7 transactions per second. Today that is a catastrophically small number because BTC is used all over the world. There were many ideas on how to solve the scalability issue. The first was the soft fork SegWit. However, as we know now, this produced almost no results. The second idea was to develop different hard forks. But how many hard forks can you create in one system without damaging the cryptocurrency’s reputation? 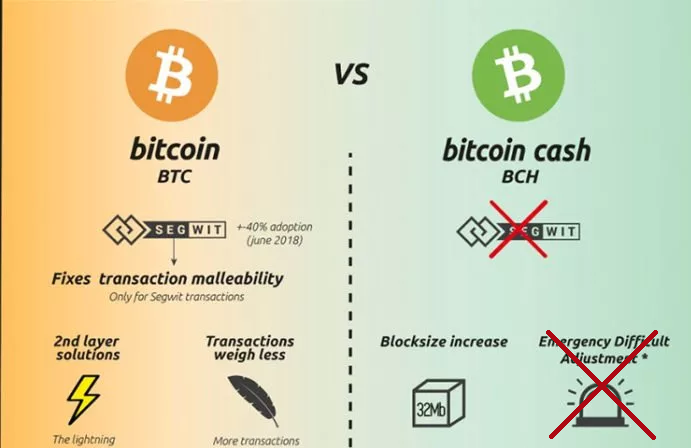 The last idea we’ll discuss is the Lightning Network. With this protocol, one person opens a payment channel for several microtransactions with another user. Each channel has its balance, which will be determined by its user. When the balance is devastated, the blockchain will verify one transaction for all microtransactions. Cryptophiles have called this a “sub-blockchain” on forums.

Bitcoin Cash’s solution is far simpler: the block size is increased when it is necessary. Bitcoin Cash will never have problems with scalability. However, it may cause some security issues in the future.

Initially, both Bitcoin and Bitcoin Cash were not designed to use smart contracts. Nonetheless, they are a very important part of today’s life, so now there are some smart contracts with limited functionality.

Bitcoin Cash allows all types of smart contracts. Moreover, they created two algorithms to improve smart contracts based on BCH. The first one is CashScript, which allows the functions to be written and compiled into code to add information to a block. The second one is Wormhole, which allows users to create their own tokens on the BCH blockchain.

The algorithm and safety protocol are the same, so miners have to use a lot of computing power to create new blocks and verify transactions. In addition, the reward for each block is the same: 12.5 coins. However, there is one important difference. Mining difficulty for BTC changes every 2016 blocks, while for BCH, the change occurs every six blocks.

Many miners love this smooth change because the mining equipment takes on new loads more easily. That is why BCH mining is better because the equipment can be used for a longer period.

At the beginning of 2020, Bitcoin was worth $7,000 while Bitcoin Cash was valued at $160. Many experts claimed that the first few months of 2020 would be very difficult for the market and that cryptocurrencies wouldn’t break through most resistance levels.

However, in February, BTC approached $9,300, and BCH hit $370. January determined the development of each coin for all of 2020. As we can see, investors believe in cryptocurrencies, which is why both BTC and BCH have opportunities to hit new maximums.

How to buy Bitcoin Cash with a debit/credit card

21 Feb, 2020
If you’ve ever tried to buy Bitcoin with a debit or credit card, you’ll know that it isn’t always easy.
Next article