2023 will be a challenging year for Ethereum

Ethereum is ending 2022 in a way worse position than Bitcoin. In 12 months, it has dropped by 69%, while Bitcoin has fallen by 64%. The long-awaited switch to PoS only resulted in new challenges that promise to make 2023 a challenging year for the cryptocurrency.

Technically, the switch went smoothly: developers managed to decrease energy consumption by a jaw-dropping 99.9%, and the blockchain's 'heart rate' was stabilised to precisely 12 seconds to create a block.

Usually, this indicator hints at an increase in the network's decentralisation. With Ethereum, the situation was the opposite because of the significant entry threshold of 32 ETH (~$38,000) for a node to be deployed independently. As a result, investors took their money to aggregators represented by Lido Finance and major cryptocurrency exchanges.

Lido, Coinbase, Kraken and Binance have a 57% market share, while the US share of the global total has reached 56%. These are alarm bells for the cryptocurrency.

Because of the dominance of the US in shaping transactions, financial regulators have already stated the need for more network supervision. The presence of such large participants makes it easier to control and impose the rules of the game. For example, this year, the crypto industry saw the virtual currency mixer Tornado Cash get blocked by the US Treasury Department's OFAC unit. Censored Ethereum blocks reach 72%. 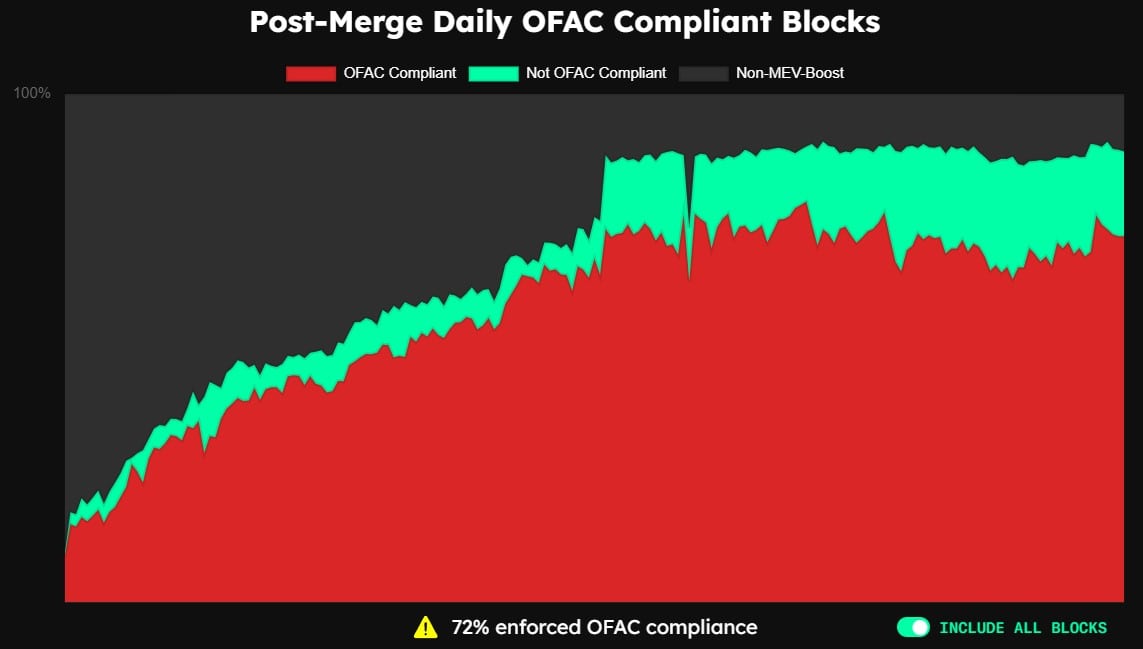 But things could get even worse if SEC Chairman Gary Gensler succeeds in getting Ethereum recognised as a security. A statement to this effect was made on the day of the PoS transition, as staking provided users with the opportunity to receive passive income.

And there's more. The deposit contract to engage validators was launched in late 2020 and currently contains 15.7 million ETH, which is worth $19 billion or 13% of the network's total capitalisation. Some investors put coins at a way higher price but can't get them back because they are actively staked.

The restriction will be lifted by the Shanghai hardfork, which will take place around March 2023. The release of a large number of coins and the disappointment of some investors with the negative dynamics can lead to a sell-off of ETH and a new downturn.