After a pump-and-dump, FTX has only $0.7 billion of Solana left

Cryptocurrency financial fraud is one of the key allegations against Sam Bankman-Fried (SBF). According to the New York Times, the former head of FTX negotiated with startup developers to offer the listing of new coins on his platform on mutually beneficial terms. SBF ran a vigorous advertising campaign on the days the coins were added to the platform, while Alameda was busy pumping the price as part of a pump-and-dump strategy.

While attracting the masses and creating artificial growth, Alameda off-loaded the number of coins it received from developers, thus boosting its profits. The media dubbed coins possessed by Sam as 'Samcoins'. These include low-liquid instruments such as Maps, Oxygen or Bonfida. Recent big names include Serum, a joint project between Solana and FTX to launch a decentralised exchange. And Solana is the most painful item on the list for the community.

At this point, it's unclear to what extent Solana's and FTX's developers cooperated since the manipulations could have been SBF's initiative. It's worth noting that the liquidation commission counted SOL as the largest asset by value, with a balance of $685 million, almost three times more than BTC or any stablecoins. 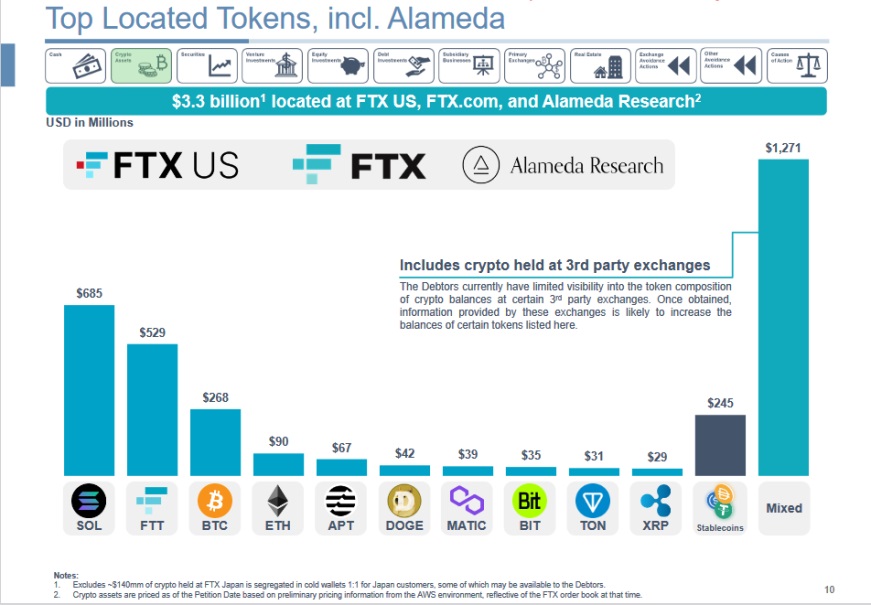 The coins are still being counted since the assets of all companies (around 100) in this 'crypto empire' need to be combined, and some of the reserves are still on third-party exchanges. According to the commission's preliminary estimates, a total of $5.5 billion in assets has been identified. Of that, $3.5 billion of it is in cryptocurrencies. SBF's total debt is estimated to be $8.8 billion.

For Solana holders, the news isn't anything to cheer about because, once legal arguments are over, the liquidation commission will start selling coins to cover the damage caused to investors. Dumping the reserves will likely lead to a decrease in the cryptocurrency's value.

19 Jan, 2023
The crypto market has come back to life in 2023. Since 1 January, the market's overall capitalisation has risen by 24% to once again reach $1 trillion.
Next article