Bitcoin 'Santa Rally' boosted by declining US dollar, but miners are still struggling

Bitcoin (BTC) closed last week at just over $17,000, the highest price in three weeks, but bulls should still be cautious before charging forth. The king of crypto is battling the world reserve currency as Bitcoin appears to gain strength from the relative weakening of the US dollar and the general boost to the wider stock market.

All eyes are on the United States as it prepares to release its latest inflation figures, which will likely affect the cryptocurrency and commodities markets as we wind our way through the final month of the year. If the bullish sentiment holds, Bitcoin could reach $20,000 by Christmas.

Popular crypto community influencers such as Credible Crypto, Moustache and Dave the Wave all anticipate a rally, with several analysts noting now historical behaviour indicates a bottom in early December (e.g., around $16,000), followed by a recovery by the end of the year. 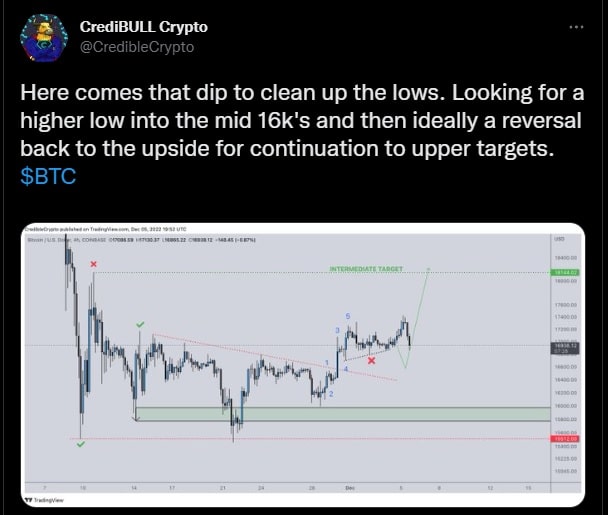 However, the community is not all singing from the same choir sheet in this case, as other popular traders have predicted larger bottom prices for BTC in Q1 2023, potentially down to $15,000 or even $12,000. The BTC pessimists include personalities such as Bluntz and Korinek_Trades.

With such mixed feelings among influential traders, caution is advised. Key elements to watch include the US Consumer Price Index (CPI) for November, which should be released on 13 December, as well as the US Producer Price Index (PPI) and unemployment figures that will follow. This trio of economic indicators has typically been indicators of short-term volatility.

Crypto traders should also keep an eye on the traditional stock market, as cryptocurrency performance has been generally correlated with riskier tech stocks.

Outside of the market, recent data has shown a decline of over 17,721 BTC in miner wallets over the last 30 days, the steepest loss since 2021. Given how Bitcoin's value against the dollar fell by 16% during November, the data appears to show miners unplugging and quitting due to unprofitability. However, there may be a silver lining for those miners who are willing to weather the storm: mining difficulty is scheduled to drop by an estimated 7.8%, adjusted automatically to reflect the market.