Ripple (XRP) remains one of the most exciting cryptocurrencies on the market, along with Bitcoin and Ethereum. With the crypto trading market entering a new era, traders who can ride an accurate Ripple prediction will stand to make a lot of money on the crypto exchange.

In this article, we'll explain Ripple's XRP and present information for making a Ripple XRP price prediction. This includes an analysis of Ripple's price in the cryptocurrency market, as well as past and future price predictions.

What is Ripple (XRP)?

Ripple and XRP are often used interchangeably on most crypto trading and exchange websites. But strictly speaking, Ripple isn't the same as XRP. Ripple is a private company that uses advanced blockchain technology to enable a network of real-time payment, exchange and remittance services built on a distributed ledger database, i.e., the XRP ledger. Ripple's payment services support multiple currencies, including fiat.

XRP, also known as Ripple coin or just Ripple, is the actual token; it's Ripple's digital asset. XRP is used on the Ripple network to facilitate money transfers between different currencies. By first converting the value of the transfer into XRP (rather than a fiat currency like USD), exchange fees are avoided, and payments can be processed instantly.

We want to keep focusing on making XRP a valuable payment tool, and that value will increase accordingly. — Brad Garlinghouse, Ripple CEO

The speed and efficiency of Ripple's system have led to its adoption by big mainstream financial institutions like Bank of America and Spanish banking giant Santander. 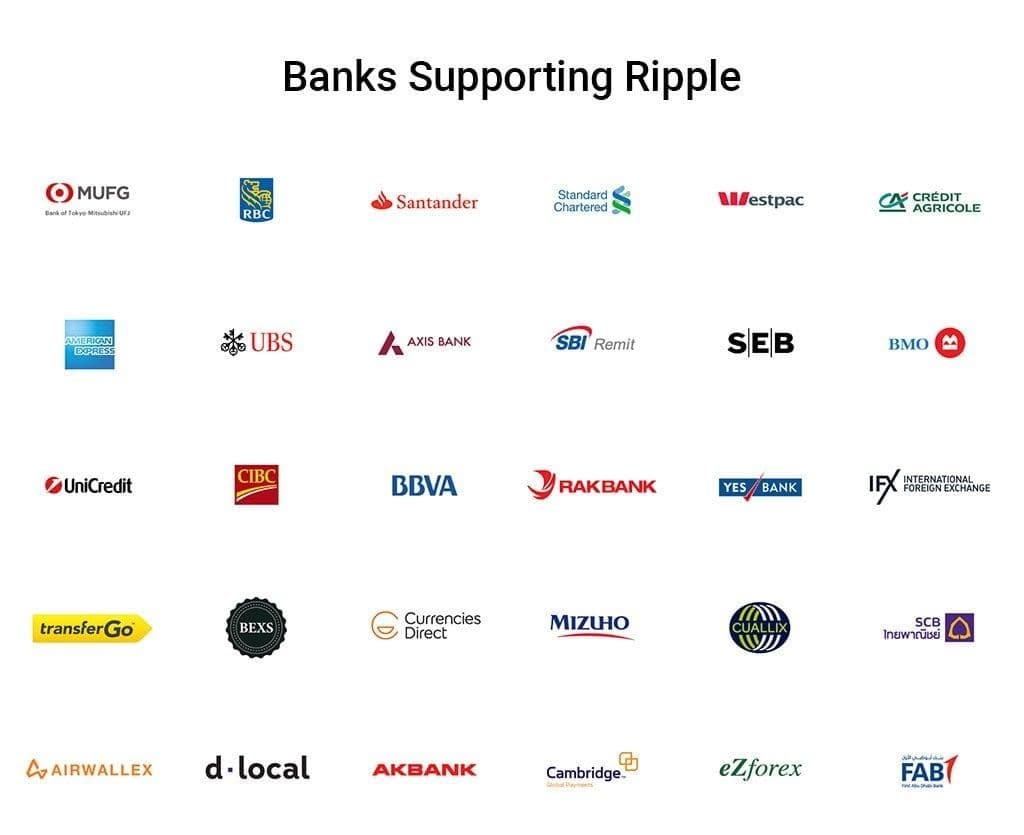 The list of banks that support Ripple continues to expand. Cryptoslate's

XRP price is technically independent of the Ripple network. Clients aren't forced to use the cryptocurrency. Still, the increased adoption of the Ripple payment system will affect XRP price predictions as mainstream interest grows.

What are the differences between XRP and Bitcoin?

To be able to understand future predictions of Ripple's XRP price, we'll first look at how the cryptocurrency has performed in the market so far. Have past price predictions been proven correct?

XRP price history. Ripple's payment protocol and the accompanying XRP digital token have been around since 2014. The Ripple coin hit the market with a value of around $0.06. Then, as Ripple formed partnerships and developed its relationships with established banks, the price of the XRP cryptocurrency started to rise. Since 2014, the price of XRP has risen, even if it's still affordable as an investment.

The first price peak came in May 2017, when one XRP became worth $0.34. The increase in XRP's value correlated with Ripple establishing itself in emerging markets when it opened new offices in Singapore and Mumbai.

Ripple's XRP is meant to be a method of facilitating payments between financial institutions, not an investment vehicle. However, you can still put money into it, and there are many reasons why you should. XRP is widely thought to have the biggest crypto market share after Bitcoin and Ethereum, but it's cheaper than both — usually between $0.30 and $1.00 in 2022. Ripple's low prices compared to other top crypto assets make it a perfect entry point for beginners and mid-level investors who have been priced out of Bitcoin and Ethereum.

Because Ripple price predictions expect the value of XRP to rise, even if adoption is slow, XRP could be a good long-term investment. Another advantage of buying Ripple is that it has, so far, shown less volatility than Bitcoin and other cryptocurrencies, making it a safer investment, even during bad trading periods for digital assets.

To examine XRP's future movements, it's a good idea to look at the past. The cryptocurrency was first made available in 2012, with a pre-mined supply of 100 billion tokens. Compare this to Bitcoin, which has a maximum supply of 21 million coins that are going to be released between now and 2140.

XRP traded close to $0.005 (€0.0045, £0.0037) when it launched. For the first few years, the price didn't move much. XRP's value remained largely flat until 2017. That was the year of the first big crypto industry boom, which was largely unexpected and lifted the value of Bitcoin, Ethereum and many other crypto tokens, including XRP. Ripple's coin increased rapidly in price during April and May 2017, rising to $0.40 per token. Prices later settled at around $0.20 for most of 2017.

This lofty high point didn't last long. Ripple faced some brutal market corrections that saw it fall to $2.46 by 8 January 2018. By mid-January, the price halved to $1.18. Finally, in February, Ripple sank below $1. XRP hasn't managed to climb back over this threshold since then. Typically, Ripple meets resistance at around $0.18 to $0.23.

Ripple prices in 2019 tell a similar story to 2018. Despite the occasional flare of interest that drove XRP's price up to $0.40 or even $0.60, it largely stayed in the twenties and didn't even come close to breaking a dollar.

In 2021, the crypto market experienced a surge which translated to higher prices and new all-time highs for most cryptocurrencies. Ripple also benefited from the surge but could not set a new all-time high. The currency grew by over 800%, the largest growth margin in a single year since 2018.

Brad Garlinghouse, Ripple's CEO, has big future predictions for Ripple, forecasting that it may become the Amazon of the crypto industry by 2025. Garlington is playing a safe long-term game. This month, in a recent interview with Brad, he was asked what his expectations for Ripple were for the next couple of years. He was quite optimistic and said, "The road map for Ripple remains the same, with wider adoption and increased positive sentiment of people towards cryptocurrencies in general, the future seems bright for XRP".

In a 2018 interview, he reminded listeners that anyone investing in XRP rather than trading it should consider thinking in terms of months and years, not days.

Garlinghouse also stressed the importance of cooperating with governments and banks, as opposed to the freebooter, regulation-dodging spirit of Bitcoin. And he might be onto something. Ripple previously thrived during bear market periods when other blockchain projects plummeted.

Here's how the market analysts at TradingBeasts predict future price changes for Ripple:

WalletInvestor, a self-described AI-based forecasting service, has predicted a stable price for XRP in the next year. The prediction suggests that XRP will neither rise nor drop significantly and by December 2023, the coin will trade at around $0.379. It gets better in 2027, as the prediction suggests that XRP's value will increase by more than 25%.

Long Forecast is run by the Economic Forecast Agency, which specialises in long-term market predictions. They predict that Ripple is not the best currency for long-term investment. According to their analysis, XRP will dip even further to $0.18 before the end of 2023. It gets even worse as they predict that in 2026, Ripple's price may average out at around $0.08.

DigitalCoinPrice is known for its positive outlook on the crypto market, and the case remains the same for the future of XRP. They predict that Ripple will grow steadily each year except for 2027 when the price will remain similar to the previous year at an average of $1.72. From then on, they predict a steady year-over-year price increase, and by 2031, XRP may set a new all-time high of $7.31.

Ripple's price could certainly rise even higher in the long term as Ripple's payment- and exchange-facilitating technology is adopted and supported by powerful banks and financial institutions. But what could be Ripple's possible prices from 2022 to 2030?

How High Can Ripple Go?

Looking at the XRP price history, some analysts confidently predict that Ripple could easily double or triple in value, perhaps even more, as the parent company's success makes it less vulnerable to the crypto market volatility.

I think you want to use XRP (as a stablecoin). The chart for XRP/XRP would look the same, so it's also sound money, but they have Institutional adoption and Partnerships, so they're better. — Vitalik Buterin, Ether creator

If both the crypto market and Ripple's commercial venture are strong, we could see Ripple's value rise to several dollars per token and perhaps even reach $5 in a few years. A $10 price prediction for XRP still seems optimistic, but anything is possible if you're looking to 2025 or 2030.

Some eager investors and traders are holding on to the hope that Ripple's price will climb to as high as $100. However, such a dramatic rise is wildly optimistic, so anyone investing in Ripple and waiting to multiply by over 100x should be prepared to hodl for quite some time.

To make price predictions for the next few months, one should look at the progress of Ripple's commercial FinTech venture and the cryptocurrency market in general.

01 Dec, 2022
The cryptocurrency world offers multiple money-making opportunities, one of which is Abracadabra. This blockchain system provides a straightforward formula: investors can profit from their collateral.