We've seen many attempts to create move-and-earn apps. However, none broke into the mainstream until STEPN released its Web3 running app. The project combined gaming with social elements on the Solana blockchain network. Using a dual-token system, STEPN managed to gain users' attention soon after its release. This article will give you a sense of the STEPN (GMT) price prediction for 2023-2030 and its projected growth based on technical analysis.

What is STEPN (GMT)?

STEPN (GMT) is a Web3 lifestyle app created by the Australia-based fintech studio Find Satoshi Lab. The project succeeded in upgrading the old concept of exercising to a move-to-earn model, which has become vastly popular in the blockchain industry. The main idea behind the STEPN app is to promote a fit and healthy lifestyle while letting users earn rewards when they simply jog, walk or run while equipped with NFT sneakers. Green Metaverse Token (GMT) is the governance token of the STEPN app.

At the time of writing this STEPN (GMT) price prediction on 26 December 2022, STEPN was one of the most popular fitness apps on Google Play and the App Store. The app offers multiple features to deliver a seamless experience to experts and newbies. The STEPN app includes an entire ecosystem of cryptocurrency-related products that allow newcomers to interact easily with it without downloading any extra apps.

STEPN features a built-in wallet, an exchange service, a marketplace and more. In-app gamification is the feature that sets it apart. For example, players can mint shoes and level up their NFT sneakers. The GMT token is mainly used for governance purposes within the STEPN app. Users can burn it to access features like sneaker upgrades. The GMT token is also used to vote on decisions concerning the distribution of staking rewards.

How Does STEPN Work?

To begin with, users need to download the STEPN app, connect their wallets and transfer Solana (SOL) cryptocurrency to buy NFT sneakers and start their journey with the STEPN app.

Buying NFT sneakers with SOL is required to start using the app and earning rewards. Connecting your NFT sneakers to the app allows you to jog, walk around and run outdoors no matter where you are in the world. By doing so, you can earn different rewards like levelling up, upgrading sneakers or cashing out cryptocurrency in fiat money.

After completing a signup process on the in-app marketplace, users need to buy a pair of sneakers. After proceeding through the instructions, one can start using the STEPN app and earn a free GST token with additional benefits.

According to STEPN's whitepaper, GST is a game token, while GMT is a governance token. Both are heavily used in the run-and-earn model. GST has an unlimited supply, but GMT was minted at the Token Generation Event (TGE) with 6,000,000,000 tokens. 30% of the total number of GMT tokens are distributed through the move-and-earn mechanism and governance participation. To ensure the longevity of the STEPN project, the total release of GMT tokens halves every three years.

Users need to move in Solo or Background mode to earn GST. Earning GMT tokens is done via different mechanisms, like levelling up sneakers, halving and random daily distribution.

GST and GMT tokens can be burnt as a result of different actions in the game. See the image below for a complete list of actions. According to the whitepaper, these burning mechanisms will be destroyed in the future. 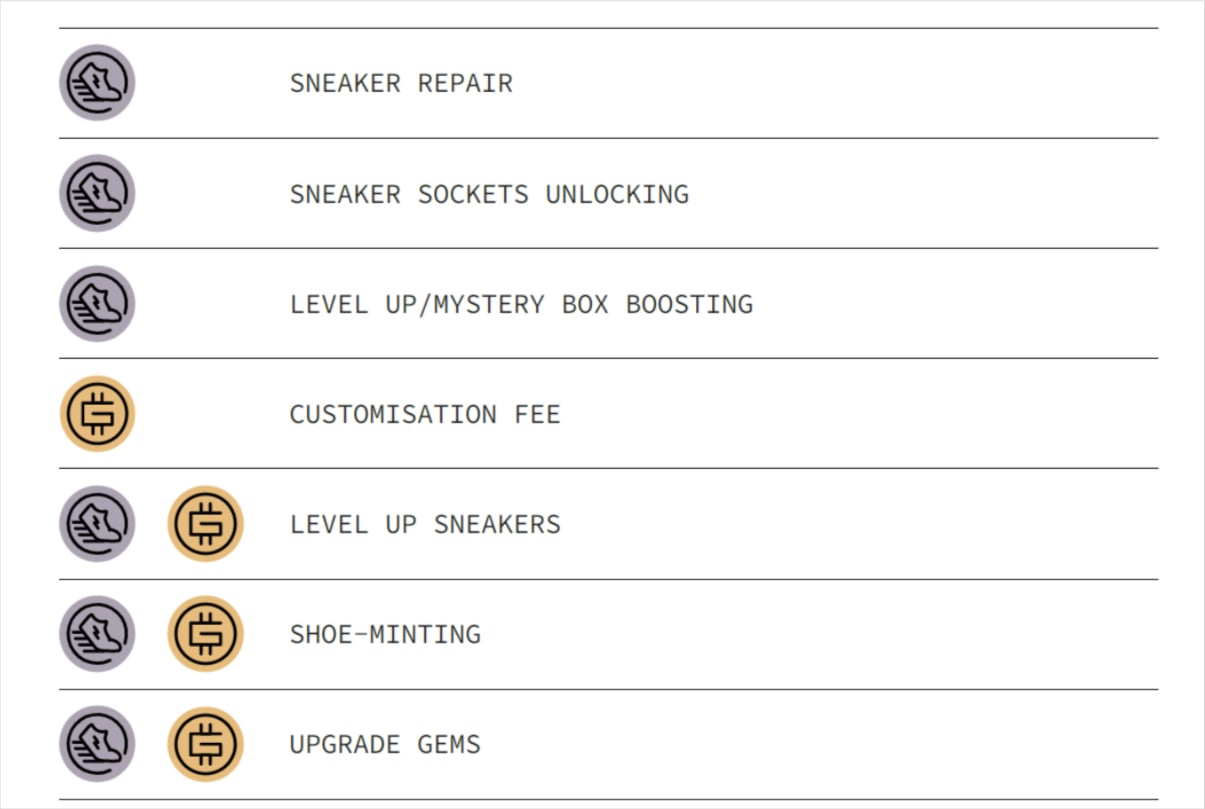 Before we discuss the STEPN (GMT) price prediction for 2022 and beyond, let's consider some of the most significant developments that have been recently released in the STEPN universe.

Features of the GMT token

Within the last month, the price of the GMT token bounced from the 30-day low of $0.2788 to the 30-day high of $0.419. The sudden downward movement means the token is in dip now, which could indicate a good buying opportunity for a quick investment.

As of 26 December 2022, the general GMT price prediction sentiment is bearish, with 5 technical analysis indicators signalling bullish and 22 bearish signals.

The price of Green Metaverse Token was below the 50-day SMA, and this indicator has been signalling SELL since 7 November 2022.

The Relative Strength Index (RSI) momentum oscillator was 28.19, indicating that the GMT market is in oversold territory. The RSI indicator suggested the GMT price should decrease in the future.

Is the STEPN coin a good investment?

There are many STEPN (GMT) crypto token price predictions. Some experts believe GMT's price should significantly grow in the future, while others predict the token's value may soon drop. STEPN is an interesting project that has generated a lot of attention recently. In terms of its market cap, STEPN (GMT) seems like it could be a wise investment choice.

CoinCodex provides short-term GMT token price predictions. According to the website, the token's value could have risen by 2.3% to  $0.369 by the end of 2023. However, its one-month GMT price prediction suggests the token may drop to $0.344.

Cryptocurrency prices are very volatile, especially when we discuss new tokens like GMT. As you can see from the GMT price predictions cited above, STEPN (GMT) token price projections are rather contradictory. There is no universal consensus either about its positive or negative price movements. The cryptocurrency's possible future growth depends on such factors as new technological solutions in STEPN projects, its legal position, the crypto environment in general and more.

How high can the GMT coin go?

Because STEPN (GMT) is a relatively new cryptocurrency, it's difficult to predict its future price trends. However, looking at the token's historical data can give us insights into how the token may perform in the future. Based on its past performance, we can assume STEPN's (GMT) price will continue to rise as more users install the app and use the platform. Since the token's IDO in March 2022, GMT has already seen some rises and falls. Currently, the token's market cap is among the Top 100 on CoinMarketCap. The GMT token's price peaked at $4.11.