Dogecoin is seeing 45% growth in Q4, which is the best result among highly-liquid instruments. The positive movement is related to Elon Musk's purchase of Twitter and his plans to create a financial platform, X.com, and a smartphone free of Google and Apple's duopoly.

After unsuccessfully flirting with Bitcoin (see this article for more details), Musk has turned his attention to Dogecoin. The meme coin can already be used to pay for a trip on Hyperloop or SpaceX, and it's expected to be added to Twitter to pay for premium services.

There's been a lot of social media buzz lately about the emergence of X.com and a smartphone from Elon. X.com, one of his first projects, launched as an online banking platform in the late 1990s. A year later, X.com merged with Confinity to become PayPal. In 2002, PayPal bought eBay for $1.5 billion.

In 2017, Elon Musk bought the rights to the X.com domain, explaining that it was out of sentimentality. Now he wants to go back to his roots to create "the most valuable national institution in the world". X.com's integration with Twitter would make the social media "extremely valuable", Musk shared his far-reaching plans at the Baron Funds Investment Conference in early November. 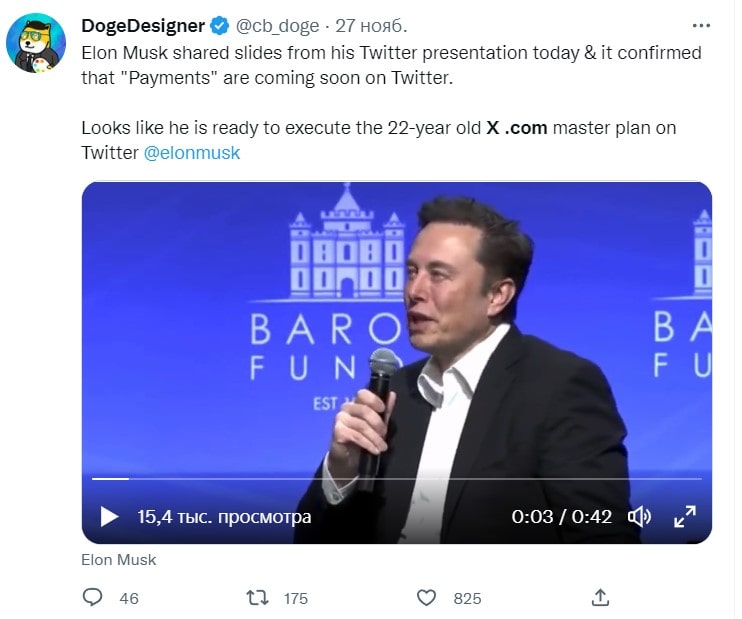 Back in June, during a meeting with Twitter employees, Musk indicated that the company should orient itself on the Chinese WeChat, which combines a social media network, a payment system, a gaming platform and a channel for interacting with official agencies. Apparently, Musk plans to start with finance via X.com.

Another curious move from the businessman could be the launch of his own smartphone if the duopolists Google and Apple remove Twitter from their app stores.

Elon Musk claims to support free speech on Twitter. However, some posts conflict with the internal rules of the platforms mentioned above. In 2020 alone, Apple deleted nearly 30,000 apps due to them containing "undesirable content".

Releasing a smartphone is unlikely to take place, but the community met the news with enthusiasm. That said, the emergence of X.com and the integration of cryptocurrencies into payment solutions is just a matter of time.