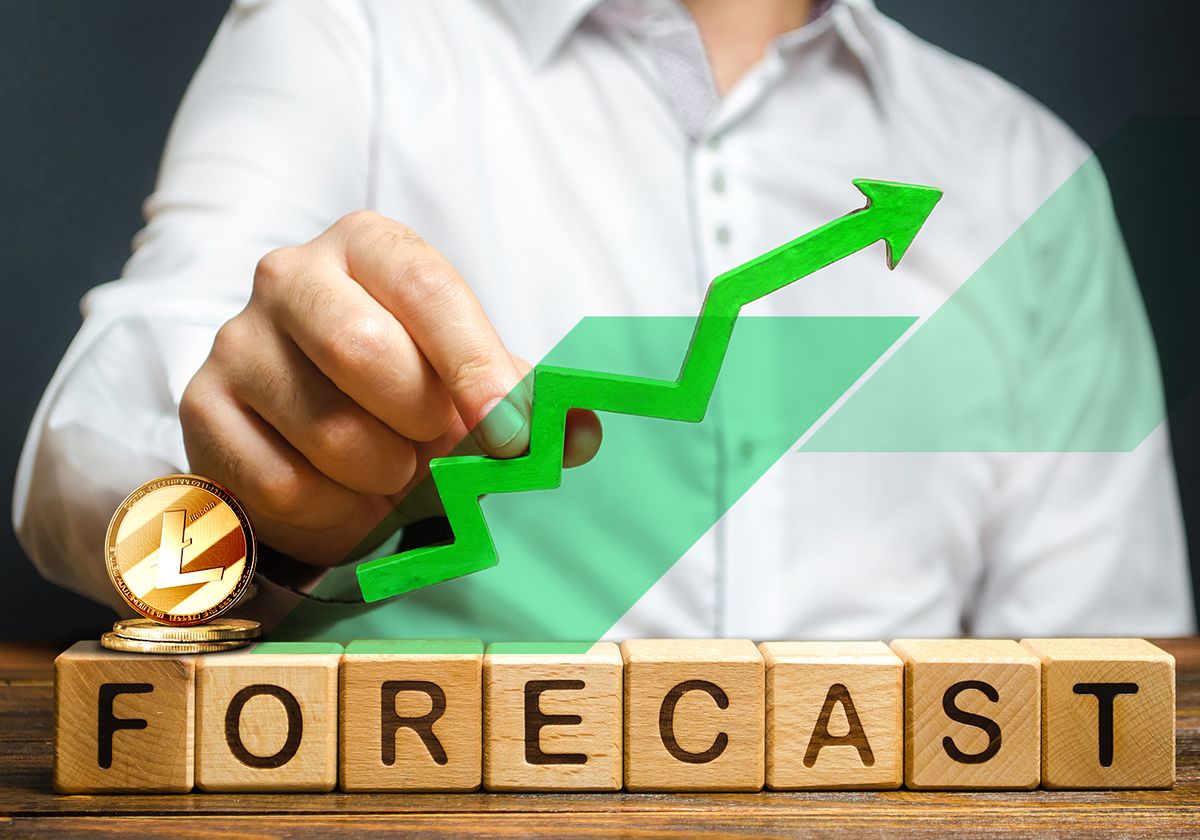 Some investors are proud of Litecoin, while others are disappointed with it. LTC’s biggest failure was in 2018. Since then, it has performed better, but, for the most part, people don’t believe in Litecoin. That’s why LTC lost its positions according to Coinmarketcap.

However, Litecoin may still provide investment potential. Analysts say that, in the long-term, LTC may grow up and reassume its previous rank. If you’re looking for a good return in 5 or more years, you have to pay attention to this cryptocurrency.

Before we delve into Litecoin predictions and answer questions such as why LTC may be successful or fail once again, let’s quickly review its history, main features and future intentions.

What is Litecoin (LTC)?

For ordinary users, Litecoin is one of the most recognised cryptocurrencies in the whole market. It is also known as the “silver crypto”, while Bitcoin is gold. Newbies to the cryptocurrency market may not know that LTC is a fork from Bitcoin. It is one of the oldest digital currencies. For many years, LTC was one of Bitcoin’s main competitors.

A brief overview of Litecoin:

Litecoin comes from the words ‘light’ and ‘coin’ because this cryptocurrency was actually founded as an easy version of Bitcoin. They have the same paradigm, but LTC is technologically better:

Litecoin has a big user base and significant demand on exchanges. Moreover, it is one of the most popular cryptocurrencies on Darknet.

LTC is promoted by the not-for-profit organisation Litecoin Foundation. Today, there are only two full-time developers at this foundation. The other supporters are advisors, investors, ambassadors and others.

The future of Litecoin’s price depends on many factors, from fundamental to technical analysis. In general, like silver compared to gold, Litecoin is cheaper than Bitcoin. The price ratio is 1:155, which is much bigger than silver’s ratio to gold (1:50). Why is that?

Litecoin is more available for buyers. LTC’s total supply is 4 times greater than BTC. Another reason for the price disparity is that Bitcoin, like gold, has better recognition around the world. Increasingly more people prefer BTC as an alternative for fiat money. What’s more, BTC is a superior store of value, while LTC is better for quick purchases.

Litecoin was founded in 2011, so today its history is very long and saturated. During its first three years of existence, LTC was very popular for several reasons:

These benefits attracted the attention of the cryptocurrency community. Most of them changed their priorities from BTC to LTC and began to buy the ‘silver crypto’. As a result, LTC’s price grew every month. From the moment of its creation in 2011 through the end of November of 2013, LTC’s price changed from $2 to $52.

A correction then occurred, and its price changed from $50 to $24 (31.12.2013). Nevertheless, the cryptocurrency community began to consider this asset for serious investments.

The reasons for such sharp changes are ambiguous. It is not as easy to interpret the real factors for a coin’s rise and fall in the crypto world. This might be due to decentralisation, the complete absence of any regulatory authority or merely speculation.

At the very beginning of 2014, the situation rapidly changed. In January, LTC was valued above $20, but from February on, a downward trend became apparent. By the summer, its price was above $10, but on 15 June 2014, it passed the psychological mark of $10 and, by the of the year, the price again dropped to $2.

The all-time Litecoin price chart from June 2014 to the end of 2017 was low but stable. There were several insignificant jumps slightly above $6, but there wasn’t any large-scale growth.

In the summer of 2015, many members of the cryptocurrency community discussed a possible increase in LTC’s price due to a halving of its mining block reward.

It was supposed to take place in August. Accordingly, a price pump was carried out on 10 July 2015, and LTC rose to $8 before rapidly dropping down to $3 and then to $2.

For the first three months of 2017, LTC’s price remained stable. “Cryptocurrency silver” was trading for $3-4 and did not give investors any hope. However, in the spring of 2017, the situation changed. Litecoin exceeded $10 for the first time on 6 April. By the end of April, it was trading at $15.

This increase was possible for several reasons:

Litecoin’s price continued to grow until the end of fall 2017. Its growth was not rapid, but stable, going from $4.3 to $83 in 11 months. That growth trend favourably influenced the popularisation of cryptocurrency and attracted the attention of investors again.

The crypto market boom. No member of the cryptocurrency market will forget the end of 2017 and the beginning of 2018. That’s when all crypto projects saw their prices grow several-fold. Some projects had a rise up to 1500%. Litecoin also had the greatest time.

On 2 December, the chart for the entire duration of Litecoin’s existence reached the $100-mark for the first time, and on 12 December, the value exceeded $200. The price continued to grow rapidly before surpassing $320 on the evening of 12 December.

LTC’s maximum price was 19 December: $372 per coin. Its market capitalisation at that time was over $20 billion thanks to the overall positive upward trend across the cryptocurrency market.

At the same time, Charles Lee made a statement that he would sell all his LTC coins for system transparency. Many members were worried that this could cause a depreciation, but there wasn’t any correction.

Then the “dark times” began for all crypto lovers. Many people began to speculate on prices, leaving the market very unstable. Every coin lost its position. Litecoin fell to $200, then to $120. The summer of 2019 was a good period for this crypto coin because it had risen to $135 per coin. However, the ratio fell again and now trades for $55. Moreover, Litecoin’s ranking on Coinmarketcap slid from fifth to seventh by market capitalisation.

In the middle of January, there was a bullish trend for LTC. The $50 resistance level was broken, re-establishing an uptrend. The bulls gained traction, and Litecoin’s price formed a resistance near $60. The bulls are going to broke this level. If they succeed, the possible price will be near $70. If not, there will be a substantial decline to $45.

After the cryptocurrency boom at the end of 2017, the crypto community thought that Litecoin would move up and get closer to Coinmarketcap’s top 3 cryptocurrencies: BTC, ETH and XRP. But no analyst could accurately predict the situation on the cryptocurrency market because everything happens so quickly.

Analysts relied on the information in the chart, so they made a conclusion that a gradual rise in Litecoin’s price might begin. They said that it would go slowly and that the price would either fall or rise again. The most positive forecasts showed that Litecoin’s price could grow to $370.

Ideally, by the end of 2018, a ‘silver’ coin might be sold for $500. In addition, analysts said that there wouldn’t be a significant drop, considering that the cryptocurrency market was in a deep correction, but that every coin would increase afterwards.

The analysts made a mistake. Litecoin saw a small increase in the spring of 2018, but then it fell to $20.

At the very beginning, experts said of the Litecoin price prediction for 2019 that the value of any asset could not decrease continuously for a long time. Any asset that had shown a significant decrease would later show a correction. Given all of the above, the situation changed: LTC’s price rose from $30 in January to $122 in July.

Analysts gave another positive forecast. They believed that Litecoin’s future price would be better. The most realistic forecast was $380 per LTC. The most impressive predicted new records: $2000 per coin. However, today Litecoin now trades for $55. Let’s talk about future predictions.

Some analysts are making very optimistic forecasts again. Others say that Litecoin will never be great again. Why? Because there are simply so many new projects with better conditions. We’ll tell you about our expectations, but let’s first look at some forecasts.

Smartereum forecasts hold that the future of Litecoin Price isn’t very positive. Their position is that this cryptocurrency will fall 2.5% in the near future. As for Litecoin’s price prediction for 2025, they haven’t provided a clear forecast.

Trading Beasts has always been very realistic. Their beliefs are based only on technical analysis. As previously mentioned, their analysis for LTC predicts that its price can grow up to $70 in the near future. However, Trading Beasts consider that this ratio can be reached only by the end of 2021. In addition, they believe that future growth of 30% each year will occur. That is why their forecast shows that LTC could trade for $150-$160 in 2025 and $200 in 2030.

WalletInvestor said that LTC might drop from $55 to $30. Moreover, they don’t believe that LTC can go up in future. This cryptocurrency cannot hit $100 within a year or even more. Walletinvestor gives LTC an overall negative forecast.

DigitalCoinPrice believes in LTC’s future. They show that this rise won’t be very high, but in 2025, LTC will be $97.

In general, Litecoin has some chances for upward growth. First, this cryptocurrency is one of the most successful Bitcoin forks. Second, it provides fast transactions, so, many people will use it as a payment system. Third, mining Litecoin is easier than Bitcoin or Bitcoin Cash. These two cryptocurrencies have positive forecasts, and Litecoin depends on their position. If the price for BTC and BCH rises, LTC’s will be in better conditions, as well.

How high can Litecoin go?

Predictions for Litecoin for 2020 from different analysts show that this cryptocurrency cannot hit $100 this year. Why? It depends on the situation on the market. Today, it is very stable. It could reach $100 and higher in 2020 only with a big pump. However, after every pump, there are corrections.

The future of Litecoin price is not very clear because the cryptocurrency market is unpredictable. Nevertheless, we consider that, in 2025, LTC’s will be near $150-$160 per coin.

LTC’s price prediction today must be based on technical analysis. We’ve seen that bulls have broken the resistance. They have a great chance of repeating this success. So, the January price for LTC might be $70.

Moreover, analysts believe that LTC can lead Bitcoin in the next bull run, which is why it has all chances of hitting $70 or more. 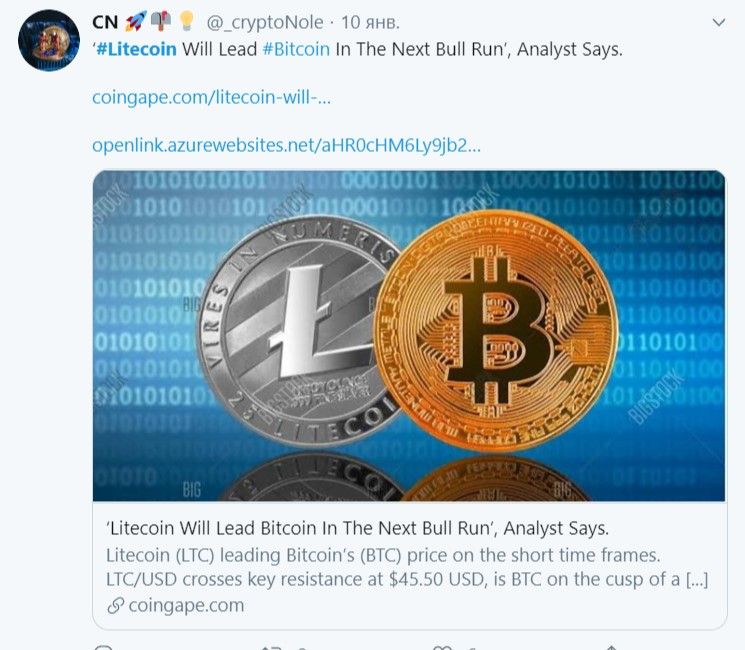 Once again: Litecoin is silver to Bitcoin’s gold. That is why LTC’s price always depends on BTC. Today, BTC shows a small growth. So LTC can reach higher marks. 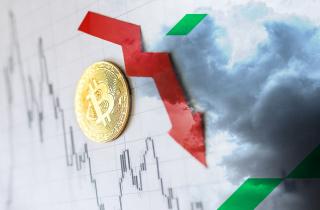 20 Mar, 2020  6 min read
Within 2 years, Bitcoin Cash has proved to be a good investment, ranking 5th among all cryptocurrencies by market capitalisation, according to Coinmarketcap.
Next article 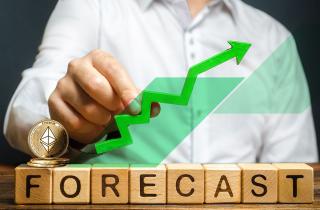 06 May, 2020  7 min read
Ethereum is the second-largest cryptocurrency after Bitcoin with $20 billion in capital and $12 billion every day trading volume.