VeChain (VET) is a project that has grown from a private blockchain logistics solution to a public multifunctional blockchain platform. The team behind VeChain was able to create an in-demand product that has created a universal platform dedicated to business. The company offers a range of solutions that simplify blockchain integration among traditional industry players.

The platform's flexibility allows you to track a product from factory to end-user, whether it's branded clothing, alcohol, or drugs. What is VeChain, who has invested in it, and what to expect from VeChain in the future? In our complete VET price prediction, we look ahead to understand whether the project can continue to develop and innovate in the future.

What is VeChain (VET)?

VeChain is a blockchain project founded in 2015. The project was initially conceived as a supply chain management and anti-counterfeiting system based on blockchain and IoT technologies. In December 2017, the product was rebranded and relaunched as the VeChainThor blockchain for decentralised applications (dApps).

At first, VeChain was famous for its blockchain technology and smart product tracking chips that could be integrated into various devices, such as NFC chips, QR codes, or RFID trackers. Writing all products into smart chips guaranteed user data reliability. VeChain's primary goals were to optimise the supply chain, protect against counterfeiting, ensure product safety and verify product authenticity, among other things. 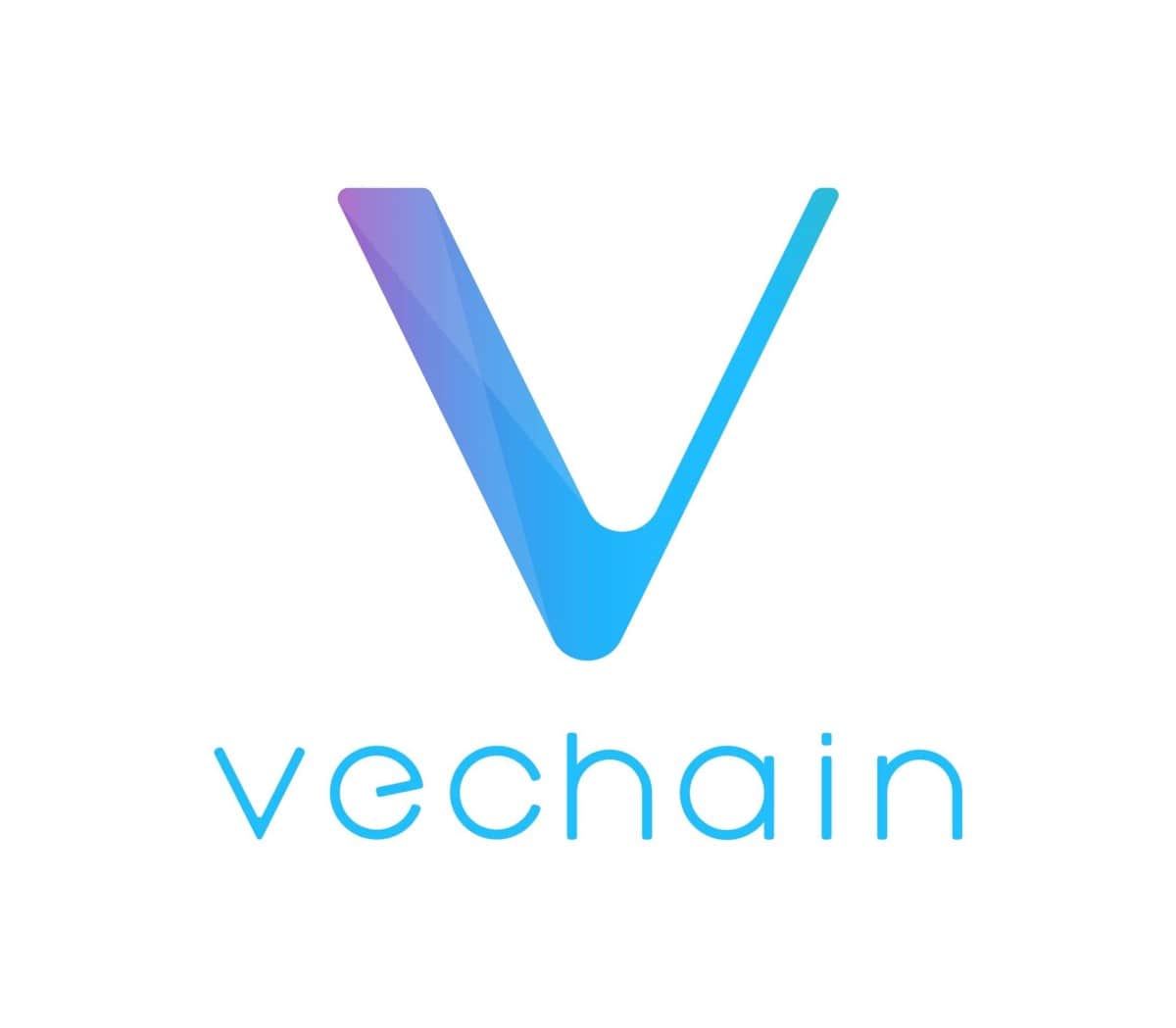 Despite its initial success in logistics, VeChain has now established itself as a blockchain service provider for businesses in any industry. VeChain's goal is to create a reliable distributed ecosystem for companies that can provide a transparent flow of information and efficient cooperation between parties. The project is known for its collaboration with major companies such as Microsoft, Shanghai Gas, Walmart China, BMW Group, H&M, and others.

VeChain Foundation, a non-profit organisation registered in Singapore in 2017, manages the project. The team of experts works on legal support for the project, which operates within the law and publishes quarterly financial reports on its website. VeChain Foundation continually strives to build new partnerships. 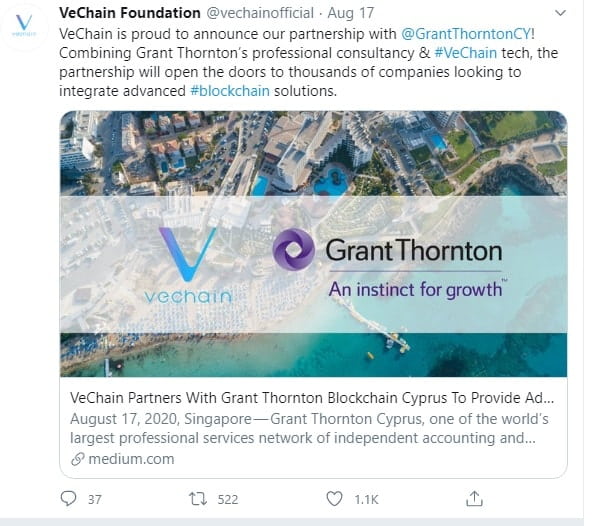 Before the public blockchain's launch, one of VeChain's first projects was to implement blockchain technology in China's public sector for the Government of China.

While VeChain conducted an ICO, China banned initial coin offering and the sale of digital tokens to Chinese citizens due to the uncertain legal status of tokens. VeChain refunded all Chinese citizens who participated in the ICO per legal requirements.

VeChainThor blockchain is based on the Ethereum blockchain, which is best-known as a platform for dApps. (Note: you can read our article What is Ethereum in our blog.) VeChain borrowed the following technical blocks from Ethereum: accounting/balance blockchain model, RLP encoding methods, Ethereum virtual machine (EVM), etc.

It takes 10 seconds to generate a block in VeChainThor. The team states that the VeChainThor blockchain can reach 10,000 transactions per second (TPS), including the PoA (proof of authority) consensus mechanism. However, the platform was first launched with 50 TPS, a value that corresponded to the network's needs at that stage. VeChainThor transactions are multitasking, which allows you to perform multiple actions in one operation. The network's peak registered TPS was 165. According to the founder, an average of 100 TPS is processed in the network.

VeChainThor's main feature is that it's designed to mass-integrate blockchain technology into businesses. That's why the project seeks to develop elements that will simplify the real use of business technologies, in addition to blockchain's primary function —transferring value.

VeChain anticipates that not all traditional organisations are comfortable dealing with cryptocurrency, but VeChainThor has a solution for this. Its multi-level payment model allows a user to make transactions using the sponsor's account. This is convenient when there are several parties involved in the business, and not all of them are willing to work with cryptocurrencies. All the user needs is a private and public key to use the platform and run smart contracts with applications through a sponsored account.

Since VechainThor was designed for use in business applications, it's built according to the following rules:

VeChain Tokens (VET), a kind of smart money, are the primary tokens used to transfer value in a blockchain between accounts. A user's role and status in the network depend on the amount of VET that the user has.

VeChainThor Tokens (VTHO), the cryptocurrency's fuel, are the secondary tokens used to send a transaction or perform actions on the blockchain. When a user performs an action in a blockchain by making transactions or running smart contracts, 70% of their payment in VTHO is burned, while the other 30% is used as a reward for validators.

VeChain has an impressive list of partnerships that have already led to working solutions. The company aims to change the big players' level of acceptance of blockchain technology by expanding partnerships and integration. The largest international companies and organisations from different fields have joined VeChain, including:

To date, VeChain's official website features 39 strategic partners. It's the impressive result of intensive work that not many companies can show off. 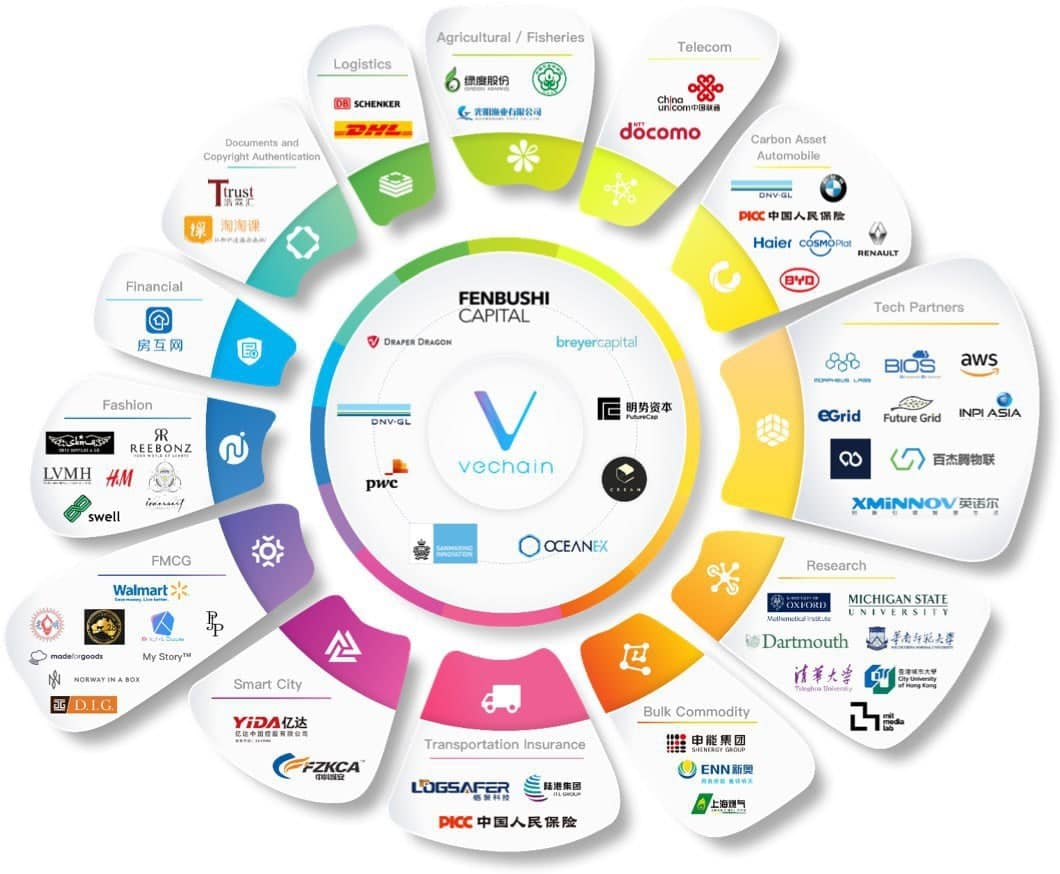 Before proceeding to our VeChainThor price prediction, let's start with historical data analysis. VeChainThor is a relatively young project that entered the market in 2018. That year marked the beginning of the bear market, but the team kept developing through 2018-2019 and was able to show excellent results in 2021.

VeChain (VET) was listed on cryptocurrency exchanges in late July and traded in the range of $0.02-$0.026. However, VeChain soon broke out of that range and experienced increased volatility. From the beginning to the middle of August, the price fell to $0.006 per VET. A rebound immediately followed the decline, hitting $0.0198 by 4 September. Unfortunately, the rebound was temporary and was followed by a prolonged recession. By 16 December, the price had dropped as low as $0.0033. VeChain closed the year at $0.004.

From the beginning of the year, VeChain continued to grow and retested the resistance at $0.0082 on 15 February. Unfortunately, at that point, the entire market had rapidly declined. On 13 March, VET set a new low at the $0.0016 mark. After that, the cryptocurrency started to grow slowly but surely. On 11 June, VET broke its resistance at $0.0082, and buyers pushed the price as high as $0.022 in July. A slight pullback followed to $0.0146. Price began to recover in October and closed the year around $0.0220.

VET technical analysis on the daily timeframe points us downwards as the price has consistently traded lower, creating lower highs and lower lows along the way. Around 20-21 July, VET's price recently broke below the support level at $0.37 and bounced off at around $0.026 to consolidate in that range. The consolidation lasted a couple of days before the price fell again, shattering the support it created at approximately $0.026. The subsequent price action has made a bearish flag, and a breakout below the consolidation will see the price head further down towards the $0.001 mark. 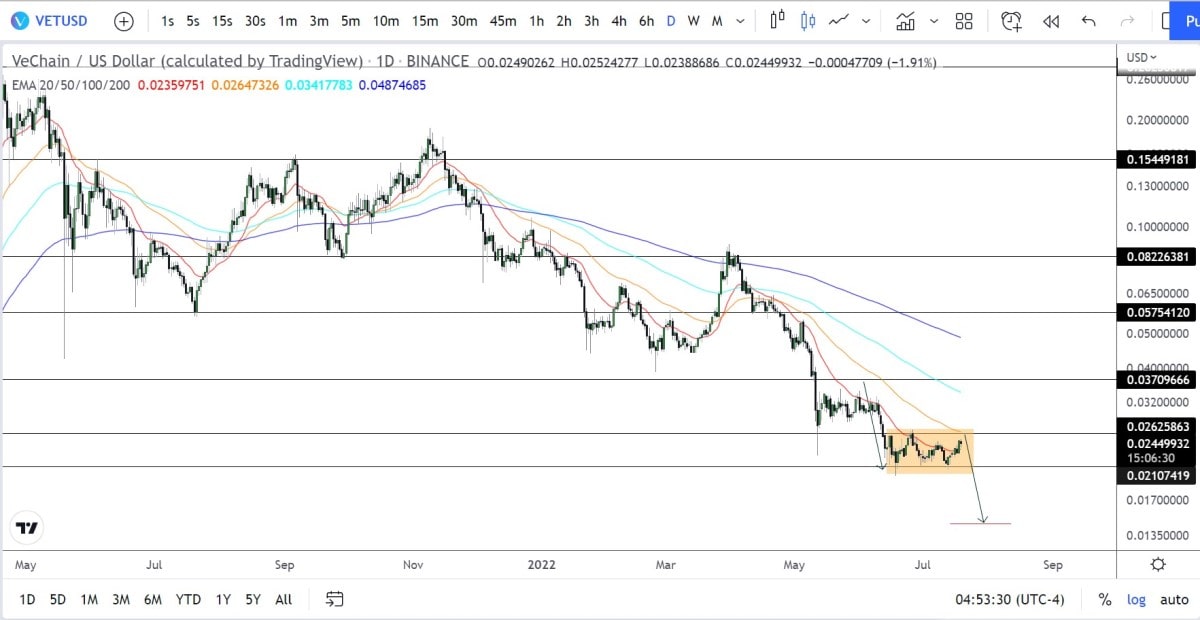 VeChain successfully integrates blockchain into existing business processes, thus optimising and freeing up resources. The impressive list of its partnerships shows that the company is serious about continuing its growth. Now it's time to analyse VeChain's price prediction using popular forecasting services.

Following the price prediction from TradingBeasts, VeChain's price is forecasted to keep ranging and average out at $0.035 for the rest of 2022. In subsequent years, VeChain will keep growing, albeit slowly, and is unlikely to fall below $0.020. According to TradingBeasts, VET may go as high as $0.070 by 2025.

The WalletInvestor forecasting service predicts that VET is not the best long-term investment. They expect VET's price to fall by more than 90% in the next year, finding support at around $0.0015.

According to CoinSwitch, VeChain (VET) is considered a healthy investment as the price of a single token has increased over time. It is also beneficial for companies that use the VeChain blockchain, as it allows better monitoring of the supply chain. They conclude by stating that Investing in VeChain can be profitable in the long term.

The team behind VeСhain has been able to achieve impressive results since the project was launched. Its partnerships show that big players are interested in this project's development and technology in general. A significant advantage of the project is that it pays attention not only to implementing improvements to the blockchain and supply chains but also to developing the sensors and microchips needed to perform the tasks.

How High Can VET Go

It's difficult to predict what heights this project will reach. The efforts spent on its development, technological solutions and extensive partnerships indicate that this project is in high demand. Nevertheless, it's fair to say that this asset's price will rise over time.

We can state that today VeChain is not just another cryptocurrency project but a public multifunctional blockchain platform. The high demand for technology solutions developed by the VeChain team indicates that interest in such developments will only grow. Those who are among the first to implement such developments are the ones to benefit the most. Today, VeChain has grown into a mature business that implements blockchain standards for industrial players.