The stocks of major mining companies have jumped by an average of 20% in the past 24 hours. Marathon Digital, Hut 8, Hive Blockchain, Riot Platforms (Blockchain) and Bit Digital have all shown double-digit growth. Even Core Scientific, with its ongoing Chapter 11 bankruptcy proceeding, has seen 16% growth. 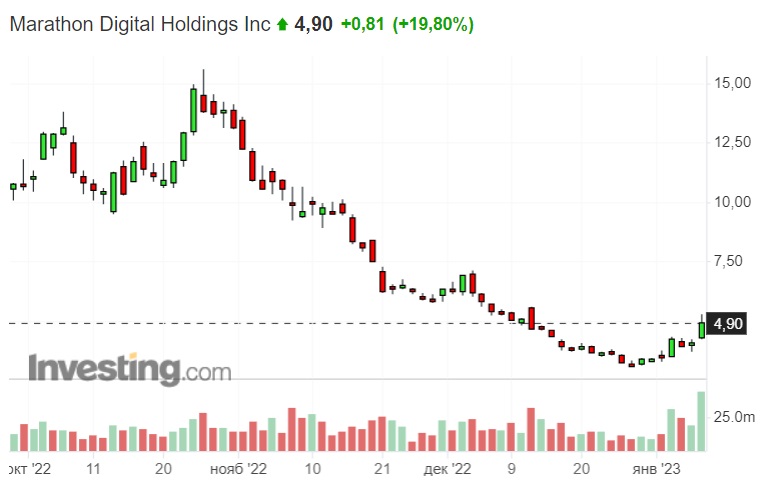 Meanwhile, Bitcoin has risen by a modest 4% to $17,200 since the start of the year, and mining difficulty may jump by 10% in six days. The combination of these factors will lead to another decline in the profitability of crypto mining.

Investor optimism is linked to a desire to buy shares at the bottom (securities have dropped from their highs more than Bitcoin has) and the expectation that the Fed's monetary policy reversal is imminent.

Over the past year, the regulator has been tightening the nuts, raising its key rate and causing an outflow of funds from risky assets. Its actions were first and foremost aimed at reducing inflation, which exceeded 9% in the US in July 2022. As a result, price growth has slowed and is forecast to have hit 6.5% at the end of December 2022.

Since high interest rates cause economic growth to slow down in addition to lowering inflation, some experts suggest that the Fed is abandoning its plans to hike the Fed Funds Rate further. For example, Blue Line Futures president Bill Baruch believes there's a strong possibility of the Fed making this move as soon as its February meeting, in which case, markets would see a "strong rally".

This is the outcome mining companies are hoping for. For example, according to CNBC, Core Scientific is using bankruptcy proceedings to buy time. It has 300 days to offer and approve a crisis recovery plan with investors. Analysts at B. Riley Financial calculate that the company will be able to generate enough revenue to service its debt if Bitcoin reaches $24,500 per token. If the cryptocurrency grows to the desired level, there would be no need to restructure the company under Chapter 11.

Another example is Argo Blockchain. To avoid bankruptcy, the company reached an agreement with Galaxy Digital in late December to sell a mining centre in Texas and secure a $35 million loan. Argo shares are up more than 56% this year.

10 Jan, 2023
Despite the cryptocurrency market's recovery, market participants are wary of all incoming bad news. On 5 January, advisor Justin Sun (Tron network) denied rumours of an impending staff reduction at Huobi.
Next article