What is Bitcoin (BTC)?

Bitcoin, also known as BTC, was the first-ever cryptocurrency. BTC is valuable, but its market price can fluctuate considerably. Before we can make a Bitcoin price prediction, it's helpful to know how it works.

Bitcoin was created in 2009 based on a white paper published by the mysterious Satoshi Nakamoto. Bitcoin is still the world's largest cryptocurrency by market cap, followed by Ethereum and Ripple. In this article, 'Bitcoin', with a capital 'B', refers to the technology or the currency as a whole; 'bitcoin' and BTC refer to units of the currency.

Bitcoin's key attributes are as follows:

Bitcoin is a decentralised digital currency outside the control of any central bank or authority. Every bitcoin (the unit) is a secure block of data that can be sent from user to user on the peer-to-peer Bitcoin network without passing through an intermediary.

Transactions are verified by network nodes through advanced cryptography and recorded in a public distributed ledger called a blockchain. Solving this cryptography requires computers, which is where mining comes in.

Before a bitcoin can be spent, it has to be generated through a process called mining, an activity in which people provide processing power from their computers to the distributed network that generates new blocks of data for the blockchain. As a reward, miners receive several bitcoins. The total amount of possible BTC is limited by design, so they're mined from a finite reserve, just like gold.

Before we can make a Bitcoin prediction or price forecast, it's crucial to bear in mind Bitcoin's finite reserve. After 21 million bitcoins are generated, no more can be mined.

An analysis of current trends predicts that the last whole bitcoin will be mined in the 2040s, but fractions of coins will still be awarded to miners. Once all bitcoins are mined, the value of the cryptocurrency will depend entirely on supply and demand.

The price of Bitcoin has seen many changes. In 2010, a single bitcoin was worth less than $0.25. Over time, Bitcoin grew from an obscure tech topic into a mainstream phenomenon as businesses started to take notice.

In November 2017, Bitcoin's price surged to over $11,000 and reached an all-time high of around $20,000 the following month. That price point remained the highest until December 2020, when its price tipped over that to create a new high at just a few dollars higher. Now, Bitcoin's price is currently above $40,000, and those who got into Bitcoin early and held onto it have enjoyed a massive return on their investment.

To make Bitcoin's future value predictions, we need to understand its past changes. We start with a technical analysis from that 2017 price surge to Bitcoin's price today before moving on to future predictions for Bitcoin. For comparison, this is the status of Bitcoin at the time of writing:

Bitcoin had a big year in 2017. On 18 December, it reached an all-time high of around $20,000. Because Bitcoin exchanges recorded different prices, there is some discussion about whether the number was just over or just under $20K.

The 2017 Bitcoin price rally is attributed mainly to speculation as the mainstream began to take notice of the cryptocurrency. Investors were rushing to ICOs, which lifted Bitcoin and other cryptocurrencies like Ethereum to record high prices. Bitcoin's cryptocurrency market cap dropped by about 33% due to this surge in interest on the broader cryptocurrency market, but the first crypto coin would soon regain its position.

After 2017, 2018 was a year of correction. Anyone making a Bitcoin price prediction for December 2018 had to take into account that there would be a backlash after the initial rush to buy Bitcoin.

The cryptocurrency began to attract criticism, and there was discussion about regulation or bans by governments. The bear market drove down the price of Bitcoin in 2018 to $3,200 by mid-December.

After spending 2018 getting mauled by the bears, Bitcoin went through a period of recuperation in 2019. The first cryptocurrency regained over 65% of market share and rose in price until June, when it reached its 2019 high of $13,275.

In 2020, Bitcoin made headlines all over the world when it took out its all-time high in December. As expected, the $20,000 region acted as resistance, and the price corrected sharply to $17,000 immediately after poking it. At that point, the world was on its toes in anticipation of the next bull run, and it wasn't disappointed. Bitcoin shattered the new resistance and traded rapidly upwards into 2021. On 14 April 2021, Bitcoin created a new all-time high at $64,000.

To get an overview of future predictions for Bitcoin, we'll look at the latest views of the most famous traders, business leaders and authors in the crypto space.

Tim Draper is a venture capitalist known for his enthusiasm for blockchain and cryptocurrency. His prediction envisions a future in which Bitcoin occupies a full 5% of the currency market by 2023 and enjoys a price rise up to $250,000.

In a recent interview with Benzinga, Tim Draper was asked about a prediction he made concerning BTC back in 2018. At that time, Draper proposed that BTC would reach $250,000 by the end of 2022 or, at the latest, early 2023.

Yes, I stand by my prediction. $250k per bitcoin by the end of 2022 or early 2023. We have had many ups and downs and will continue to, but the global, trusted, decentralised, frictionless, open, transparent bitcoin will become increasingly popular as more and more applications evolve, - Draper said.

Tom Lee is a crypto trading expert who worked at JP Morgan before co-founding Fundstrat, where he works as head of research. In a recent interview, he was asked his thoughts about Bitcoin's price.

Again, even though bitcoin is in the penalty box now, I still think it could exit the year over $100,000

Author and trader Willy Woo claims that Bitcoin is now a mature asset, and he believes BTC's price can reach $100,000 before 2022. He explains that he doesn't expect the price to consolidate and sell for years as it did after the surges in 2013 and 2017

American broadcaster Max Keiser recently made a Bitcoin price prediction for 2020 in his regular financial analysis show The Keiser Report on RT. Much like Tim Draper's forecast, Keiser predicted that BTC's value would go up during and after the coronavirus market crisis, and as we saw, Bitcoin's price did exactly that.

Back in July, Max was asked for his Bitcoin price prediction. He claimed that BTC's price would pump up 40x, and at the time, Bitcoin was trading around $50,000.

I predict — and this is not only the ultimate use case but the ultimate irony — that once people realise that they cannot get gold, they'll start flocking en masse into Bitcoin

According to Keiser, a run on gold by the rich will leave Bitcoin as the most viable haven for many.

In one interview, Keiser quadrupled his BTC price forecast, claiming that the first cryptocurrency would surge to $400K.

I am officially raising my target for Bitcoin — and I first made this prediction when it was $1, I said this could go to $100,000 — I'm raising my official target for the first time in eight years, I'm raising it to $400,000

Vays has also slammed Tim Draper's predictions as "irresponsible". But Vays' future Bitcoin price predictions are optimistic. He forecasts that Bitcoin could reach $100,000 in 2022.

Unlike Tim, Mike Novogratz still thinks that the cryptocurrency market is still at an early stage. He said, "Right now, total crypto wealth is roughly $2 trillion, so that's one half of 1% of all wealth". Does this mean the market is in danger of dying out, or growth will become exponential? Well, Tim went on to explain that the total crypto wealth is roughly $2 trillion, which translates to just 1% of global wealth.

If you don't think in the next two to three years that can be 2% to 3%, you're not paying attention to the trends

Mike believes that Bitcoin's price hasn't even started its growth yet, and the coming years will see Bitcoin hit higher prices.

The late antivirus pioneer turned crypto enthusiast John McAfee pledged to eat his own manhood if his BTC price prediction of $1 million by 2021 didn't come true. McAfee walked back that outrageous statement. 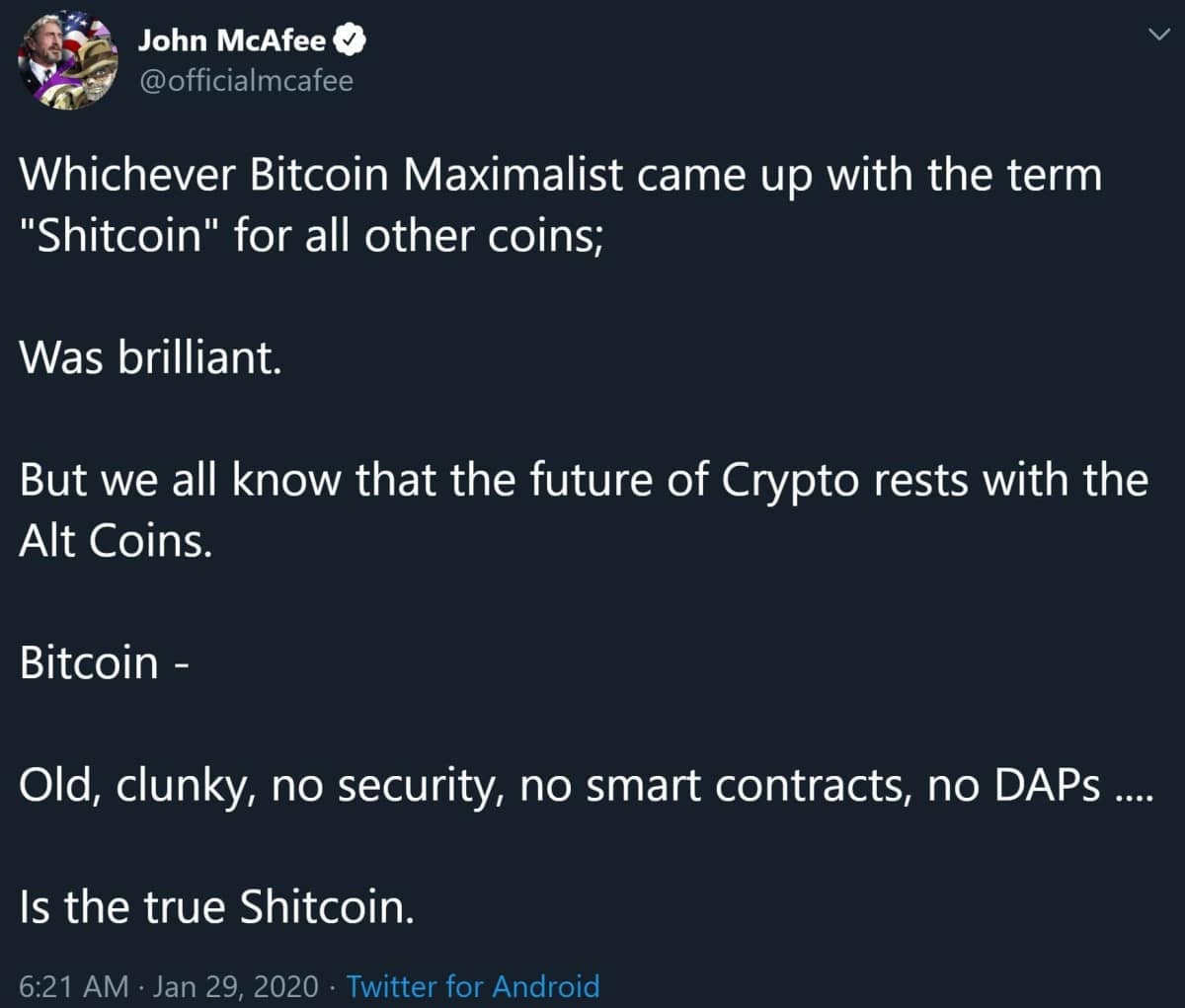 McAfee owned a cryptocurrency exchange for altcoins based on the Ethereum blockchain. On BTC, McAfee noted that "as a store of value and cryptocurrency, it's the standard" and that "it's still going to be worth a fortune".

An author at crypto news site Smartereum has suggested that Bitcoin isn't mature enough for traders to claim we've reached a peak. They predicted that Bitcoin is likely to hit $500,000 in the next few years but warn that regulations and sentiment may also negatively affect the price.

The latest end-of-year BTC price predictions from LongForecast predict that Bitcoin will close the year with $54409, which is about $4,000 higher than the current price. Here are predicted price ranges for the following years:

DigitalCoinPrice's forecast for December 2021 ($78,554.72) is quite optimistic, but not unrealistic. Their BTC price prediction for the future remains positive:

How high can Bitcoin go?

Bitcoin's value fluctuates more often than fiat currency and by much larger amounts. Although you can exchange BTC for goods and services just like other currencies, Bitcoin's potential to hugely increase in value means that many buy Bitcoin as an investment to trade on the market for a higher price than it was purchased for.

This means that Bitcoin can behave more like stocks than currency. No government can manipulate Bitcoin; only the market can determine its price.

At the time of writing, market sentiment is neutral-bullish. Since the price created a new high at $64,000, it corrected back to around $28,000, consolidating for some weeks before a grudging upward trend began. Bitcoin's price has tried — with some success — to climb higher. It broke the $40,000 resistance level back in August and recently found support in that region. This has informed some buying pressure as bulls seek to use the bounce to drive the price above $59,000, which was the previous high before the all-time high around $64K. Bitcoin is currently trading at $52,500 and is expected to continue upward ever so slowly. Also, the 55-day and 200-day EMA on the daily timeframe currently signals a bullish trend, so it's quite likely to see the price take the previous high out in the coming days or weeks.

Increased adoption of digital currencies and blockchain by central banks and financial institutions will no doubt increase interest in Bitcoin, the first cryptocurrency.

The best way to predict Bitcoin's future price is to familiarise yourself with the cryptocurrency market today. StormGain, the crypto trading platform that offers the most generous bonuses for clients, also has an educational programme to prepare traders with the best information about the crypto market.

18 Oct, 2021
The Chainlink network has gained popularity by providing reliable data protection against unauthorised access for complex smart contracts on any blockchain.