Although the cryptocurrency community is relatively young, it has already managed to create its own culture, including specific terminology. For anyone interested in learning about cryptocurrency, understanding its unique terms is a must. Anyone who has taken even the slightest step into the crypto world most likely has heard the term "HODL". The term was introduced back in 2013 and has since become one of the most commonly used acronyms of cryptocurrency investors and traders. So let's take a closer look at HODL's meaning.

What does HODL mean?

HODL means long-term cryptocurrency storage. Initially, this term originated from the misspelling of the word "Hold", as holding is a strategy for buying and storing Bitcoin and other cryptocurrencies for an extended period (from several months to several years). To improve your trading skills, check out our complete Crypto Day Trading Guide in our blog.

In 2013, a Bitcointalk forum user wrote a post entitled "I AM HODLING". In that post, the user said that, despite the recent fall in the price of Bitcoin, he wouldn't sell his BTC, instead of continuing to hold it. He realised that since he wasn't a skilled-enough trader and couldn't spot highs and lows, the best option for him would be simply not to sell and just hold Bitcoin. By the way, if you are considering buying Bitcoin, feel free to read about the easiest way to buy Bitcoin with a credit card.

The crypto community quickly became engaged with this post. People were particularly attracted by the new HODL acronym. There are a few reasons why the term became so popular.

First of all, it sounds funny. Besides that, many also saw that it somehow reflected the feeling of watching your cryptocurrency fall but continuing to hold. More specifically, the meaning of 'HODL Bitcoin' describes a trader's emotions. The feeling that a trader has when he gets confused and doesn't really know what's going on, so he decides to sit back and relax.

Since cryptocurrencies are a relatively new market, they attract a large number of newcomers. The mentality of an experienced trader is less prone to emotions and naturally different from that of a beginner. The ups and downs of the market always cause complex reactions from traders. These reactions trigger a wide range of fear, anxiety, excitement, confusion and, in this case, the strong desire to hold on tight. For one reason or another, it seemed that HODL embodied all these thoughts in a single, misspelt word.

HODL Meaning for the Crypto Community

The term HODL has actually acquired a particular value in the crypto community. Summing up, HODL means that you keep your crypto no matter what because you're sure that you'll eventually cash in big when the value of your cryptocurrency skyrockets. That doesn't mean you just sit passively on your crypto, waiting for prices to rise. Instead, you HODL cryptocurrency in the face of a massive and sudden drop in prices. You are resolved to survive the storm and plan to reap the benefits when it finally settles. 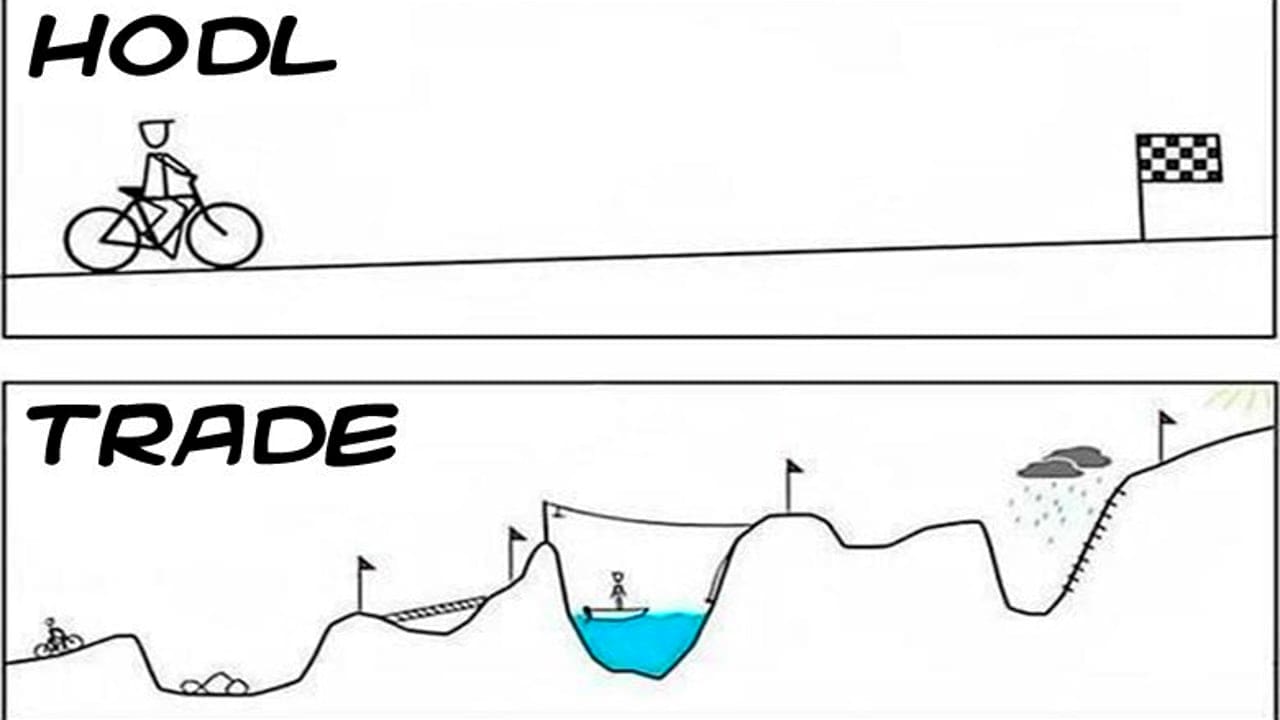 Other popular terms every cryptocurrency day trader must know

We hope you found this article informative and interesting, and that it was able to tell you something about Bitcoin and cryptocurrency in general. Although cryptocurrency slang is continually evolving, these terms will give you a good sense of community vibes. So ignore the FUD, always DYOR and HODL until the end!