There's a question that most people who are new to mining wonder: how to mine Ravencoin? It's never been easier to mine crypto. With Bitcoin mining being out of reach for beginners, and Ethereum switching to proof-of-stake, Ravencoin is one of the easiest crypto assets that even beginners can start mining with a GPU.

Miners process transactions and secure networks as they create new coins. You can mine a coin solo or join mining pools to increase your chances of success further. If you look forward to increasing your crypto holdings and generating passive income using your device's GPU, the following tutorial should come in handy for you. This Ravencoin mining guide will tell you how to mine RVN coins and start earning RVN quickly.

Ravencoin (RVN) was launched on 3 January 2018. It's an open-source network that allows almost instant transactions between holders. Ravencoin is built on the Bitcoin code's fork and uses the Unspent Transaction Output system. RVN can be mined with NVIDIA and AMD graphic cards.

According to its official whitepaper, Ravencoin gets its name from the Game of Thrones world of Westeros, where ravens were messengers that carried statements of truth.

Ravencoin was launched as an alternative to other blockchains (like Ethereum) supporting digital assets. The main purpose of RVN is to enable users to create and transfer assets more efficiently.

Key points you need to know

Ravencoin works quite similarly to Bitcoin. The main difference is that every user can start mining RVN from an average computer thanks to its particular algorithm. Similar to Bitcoin, Ravencoin uses a PoW (proof-of-work) consensus to keep its network safe. Unlike Bitcoin, RVN uses KAWPOW, a special hashing algorithm.

The RVN network has updated its mining algorithm twice. For the first time, it switched from X16R to the X16Rv2 on 1 October 2019. The next upgrade brought a shift from X16Rv2 to the KAWPOW algorithm. These changes were vital to prevent x16R ASICs and FPGAs from mining RVN. The KAWPOW hashing algorithm prevents ASIC equipment from engaging in Ravencoin mining. Its main goal is to allow more miners to use the network while still keeping it decentralised.

The RVN mining algorithm prevents specialised hardware from mining it. This kind of industrial equipment makes it more profitable to mine Bitcoins. However, it makes the mining process less accessible to the average user.

The Ravencoin blockchain makes miners solve computational puzzles that most hardware can handle. The blockchain guarantees that puzzles do not increase fast, which could eliminate some miners from the process.

X16R was the first version of the Ravencoin mining algorithm. To make mining RVN resistant to ASICs, the network switched from X16R to X16Rv2 and then to KAWPOW. The latter is a slight variation of X16R.

How to mine Ravencoin (RVN)

It's time to start mining Ravencoin. We'll cover the most common ways to mine crypto and the must-follow steps that teach you to mine RVN from scratch. To get started, you need to get a Ravencoin wallet to earn mining rewards, install mining software that's compatible with the KAWPOW mining algorithm and pick a mining pool. Now, let's dig into the details and look at the ways to mine RVN.

Ways to mine RVN coin

Mine Ravencoin on GPU

To mine Ravencoin, you need a GPU with at least 4 GB of RAM. To start mining RVN this way, take the following steps.

Step 1: Get a Ravencoin wallet

Similar to other crypto-mining processes, you need an RVN wallet to get started and receive mining rewards. You can work with any RVN supported wallet, but it's recommended to use the official Ravencoin walled called Raven Core.

Please make sure that you download crypto wallets and mining software only from trusted sources. Another tip is to keep your mining applications on a different network than the one you use for running day-to-day tasks. Try not to use devices from which you shop online or that store your financial information.

After downloading the software, install Raven Core on your device. You'll need to set up a new wallet that looks something like this: 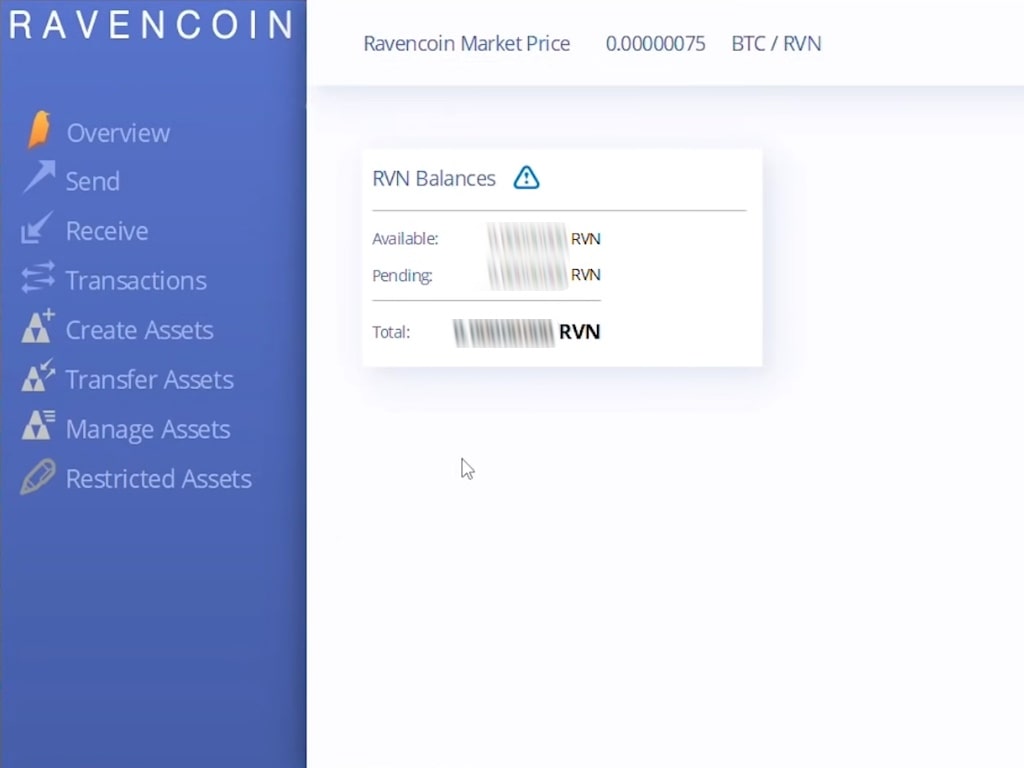 Wait until Raven Core synchronises with the blockchain.

Please be informed that you might be triggered by malware if you download and install Ravencoin mining software on Windows. Add an exception in Windows security to finish the installation successfully.

You can mine Ravencoin with the following types of mining software:

NBMiner is commonly used for Ravencoin mining. If you also opt for this option, ensure that you use the latest NBMiner version.

Next, you need to choose a mining pool. You may pick any of the ones listed at miningpoolstats.stream/ravencoin. When making your choice, be sure that the pool has less than 50% hashing power. Otherwise, it'll be dangerous for the network.

Once you choose the mining pool, click it, and you'll be taken to its website, where you can find all the details about the pool and the mining pool's address.

Download and unzip the files on your PC. Navigate NBMiner_Win > start_rvn.bat. Right-click on start_rvn.bat the file to edit it. You'll see a file like this:

Add your RVN wallet address inside start_rvn.bat by replacing "default" with the name of your mining GPU.

You also need to add the mining pool's address (which we discussed in step 3). Copy it and add it to the file. You'll get something this:

Save the sart_rvn.bat file before closing it.

Mine Ravencoin with CPU

You can start mining Ravencoin with any PC in under 5 minutes. The following piece of the Ravencoin mining guide explains how to mine RVN with your CPU today.

Step 1. Get a wallet. You can use wallets like Exodus or Atomic or download official wallets from the Ravencoin website (like we have previously discussed). Once the wallet is installed, copy your Ravencoin address to use it in the next step.

After downloading the .xip file and extracting it to any location on your site, locate the file "pool_mine_example.cmd" and edit its contents.

After you finish editing, you'll get a result like this:

The Pool URL is placed in the second line, after -o. All you need to do is choose one of the following URLs (whichever is the closest to you based on your location):

In the third line, you need to enter your wallet's public address (from step 1) after "RVN:" and before the first dot ".".

The general structure of the address looks like this:

The workerID is any name you want to give to the computer to identify it in the pool stats.

Run the file as an administrator.

Mine Ravencoin on Windows

Mine Ravencoin on macOS

To mine Ravencoin on macOS, you'll need macOS 10.15 Catalina or later. Using the M1-powered MacBook Air will also work. The easiest way for a beginner to start mining RVN on a Mac is using the multifunctional MinerGate platform. Its software uses a lightweight GUI, and the system automatically selects the most profitable mining algorithm.

The setup includes the following steps:

That's pretty much it. By following the steps described above, you can mine RVN coin even if you're a beginner and haven't tried your hand at mining before.