A Requiem for Bitcoin?

The crypto sell-off is intensifying, and the recent crash of UST raises questions about the viability of stablecoins as an asset class. Against this backdrop, the number of forecasts about the sudden death of Bitcoin and the entire cryptocurrency industry falling into oblivion has increased.

The continuation of Bitcoin's correction was brewing back in March-April. However, smaller users — those with wallets containing less than 1 BTC — absorbed 0.58% of the total circulating supply during these months, increasing their share to 14.3%. Nevertheless, their activity was not enough to hold up the price under the pressure of objective factors. In April and May, we talked about why a key investment force — institutional investors — are moving away from Bitcoin.

With the fall of the crypto market's capitalisation, the problems it faces have become more acute. Thus, the growth of Terra (LUNA) was largely due to its high annual yield, which reached 20% when holding the UST stablecoin on the Anchor platform. Before UST's crash, Anchor was holding 75% of the circulating supply, or $14 billion. As soon as the peg between UST and the US dollar was broken, investors rushed to withdraw their funds (for more details, see yesterday's article).

The collapse of the third-largest stablecoin raised questions about its viability as an asset class, and US Treasury Secretary Janet Yellen urged Congress to urgently draft legislation to regulate stablecoins.

The risk of collapse applies both to algorithmic stablecoins and centralised ones, such as Tether (USDT), which has a capitalisation of $82 billion. An audit conducted last year showed that instead of holding promised dollars in bank accounts, the company was predominantly holding securities as a reserve. This could also lead to a liquidity crisis in the event of an active USDT sell-off. Cautious investors are already getting rid of the stablecoin; its capitalisation has decreased by $1.4 billion in just a few days.

In the event of a break in the USDT-USD peg, the cryptocurrency market may face a full-blown crisis and a serious outflow of capital. For example, gold zealot Peter Schiff is already predicting that Bitcoin will fall below $10,000. And yet, this will still not be enough to signal the end of Bitcoin, whose strength is in decentralisation, independence and a lack of politics and geographical boundaries. 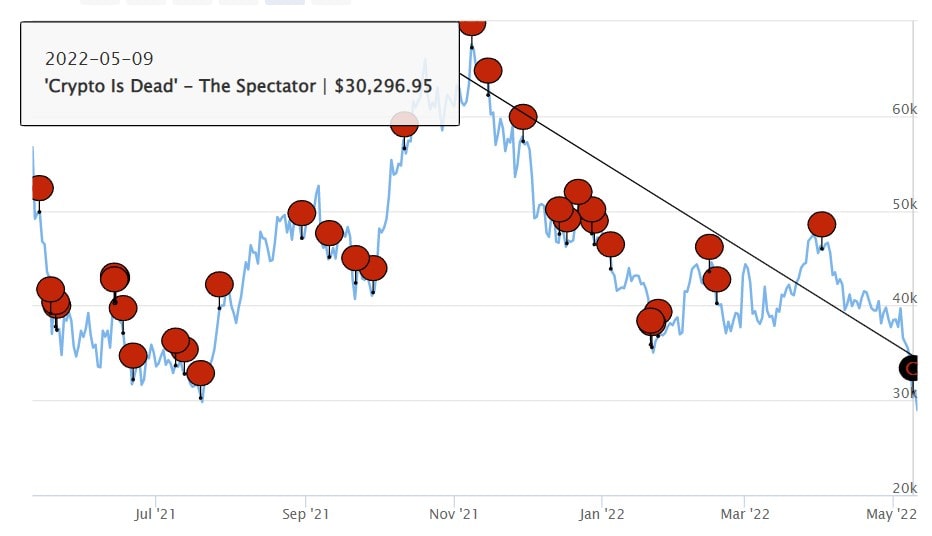 In this regard, the statistics from 99Bitcoin.com, where an obituary for Bitcoin has been maintained since 2010, are noteworthy. During this time, the cryptocurrency has been 'buried' 448 times, reaching a peak of 124 'deaths' in 2017. Only seven obituaries have been written this year, but recent events hint at an increase in the funerary sentiment.

What do you think is next for Bitcoin? Let us know in the comments!

01 Jun, 2022
The blockchain industry keeps evolving, with new projects popping up all the time. But only a few of them are attracting really keen interest from the blockchain community.