The cryptocurrency world offers multiple money-making opportunities, one of which is Abracadabra. This blockchain system provides a straightforward formula: investors can profit from their collateral. The Abracadabra protocol offers DeFi solutions to solving modern problems. The network's native token is SPELL, which has been showing a steady rise recently. What height can the token hit, and what are the Spell Token (SPELL) price predictions for the end of 2022 and beyond? Let's find out.

What is Spell Token (SPELL)?

To better understand what the Spell Token (SPELL) is, let's see how Abracadabra.money works. Abracadabra.money is a decentralised finance (DeFi) platform that allows users to deposit ibTKNS (interest-bearing tokens) as collateral to borrow the USD-pegged MIM stablecoin. The amount users make in interest depends on the asset they collateralise.

Abracadabra.money runs on user-generated liquidity pools. Liquidity providers (LPs) are incentivised through return on interest (ROI) on their staked SPELL tokens. Abracadabra.money uses Kashi Lending Technology, which allows for isolated risk markets that are not shared across the platform's trading pairs.

To guarantee that all of its main systems run smoothly, the Abracadabra protocol has two native tokens: MIM (Magic Internet Money) and SPELL. Both tokens run on the Ethereum platform and are used for staking. MIM and SPELL tokens are both involved in keeping the Abracadabra ecosystem running smoothly. The tokens provide many benefits once they are staked on the forum.

The SPELL token (SPELL) uses three different tokens to lend money in Abracadabra: yvWETH, yvUSDC and xSUSHI. People can use them to lend digital money.

One of the major advantages of using the SPELL token is the ability to earn passive income in the form of a percentage of trading fees. Once you invest in SPELL, you get voting power, which means you have voting rights to participate in governance. The more SPELL tokens you buy, the more voting power you get. 75% of the trading fee goes to investors, and the remaining part is used for other purposes.

The first mention of the SPELL token goes back to 2021. Similar to the FLOKI INU (FLOKI) token we discussed in previous posts, the project's team is anonymous, and nobody knows who stands behind SPELL.

Abracadabra.money was launched in May 2021. Since then, the platform has been taking over the DeFi world, with its MIN token currently ranking as the sixth-largest stablecoin by market cap. As a cross-chain lending protocol, Abracadabra enables individuals to use interest-bearing tokens they earn in vaults (like xSUSHI and yvUSDT) to use their capital.

MIM is a USD-pegged stablecoin backed by interest-bearing tokens. By depositing their interest-bearing assets to Abracadabra as collateral, users get a debt allocation and interest, which results in the MIM token getting deposited into the borrower's wallet.

SPELL holders, in turn, can use their tokens to receive sSPELL, which grants the holders voting rights.

According to the project's whitepaper, "Abracadabra uses Kashi Lending Technology to provide isolated lending markets that allow users to adjust their risk tolerance according to the collateral they decide to use".

Using Kashi as the lending engine allows users to leverage their interest-bearing token positions. Abracadabra has developed a one-click UI enabling you to do so automatically. Here's how it works.

Before opening a leverage position, users need to deposit the interest-bearing token they want to leverage. With Kashi, a person can withdraw more MIMs than possible.

To open a leveraged position, users need to deposit the interest-bearing token they want to leverage. With Kashi, you can withdraw more MIMs than possible, provided that the required collateral is supplied within the same transaction. 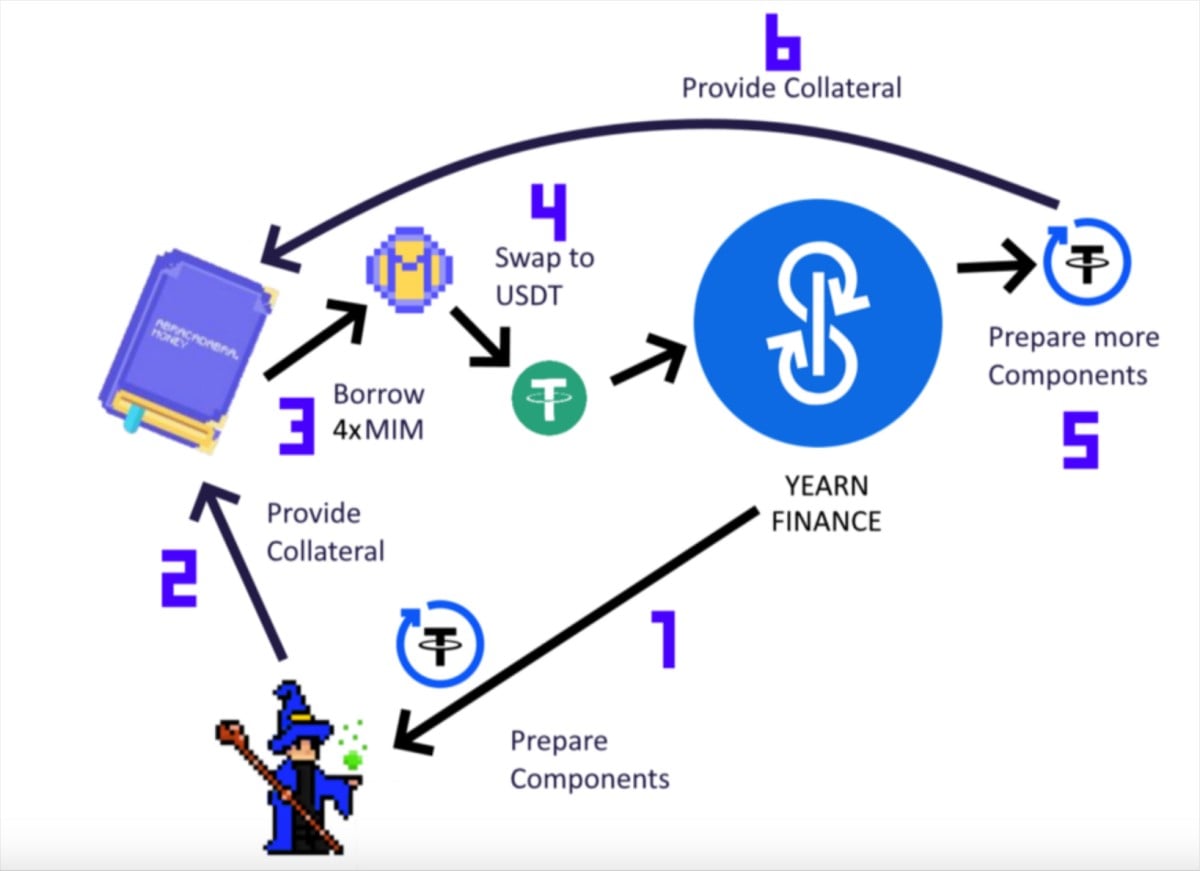 Here's how it works step-by-step:

How Does Spell Token (SPELL) Work?

Spell Token (SPELL) is a reward token created and used by Abracadabra.money. The platform uses ibTNKS (like CRV, YFI, CVX) to offer collateral for borrowing MIM. If users contribute to the project by participating in one or more of the offered opportunities (like providing staking liquidity or yield farming), they are rewarded with a SPELL token.

The Spell Token (SPELL) gives users voting power. They can participate in the project's governance or stick to earning rewards by staking tokens and receiving passive income.

Using Kashi Lending Technology created by the SushiSwap project allowed Abracadabra.money to bring many innovations to DeFi lending. Isolating the lending market is among them. It prevents the risks from being shared across the entire ecosystem. Let's consider the following example. If the liquidity for a specific pair runs out, only that pair will suffer. Other pairs will continue operating as usual.

To continue discussing SPELL price prediction, let's define the key advantages it can get by joining Abracadabra.money's platform.

Although the SPELL token has been in a bearish trend recently, it is still having difficulty getting on board with other cryptocurrencies. In the past seven days, the token's price fell by 2.78%. Although the token might show strong fundamentals, it still has risky framing segments. It suggests that the SPELL token might not be a profitable investment in the short term.

The SPELL token's price decreased by 26% during the last month. The sudden drop means the token's price is low now, and it may be a good buy opportunity for a quick investment.

Spell Token's price is below the 50-day SMA, and this indicator has been signalling SELL since 6 November 2022. The most recent Death Cross in the Bitcoin market happened on 16 February 2022.

The Relative Strength Index (RSI) momentum oscillator signals whether a cryptocurrency is oversold (below 30) or overbought (above 70). Currently, the RSI value is at 35.35, which indicates that the SPELL market is in a neutral position.

Many experts and cryptocurrency analysts believe SPELL could be a good investment for a long time. The token's value has been increasing recently, meaning the investment is capable of yielding a good return.

Does the Spell token have a future? Let's find it out from the following Spell token price predictions shared by cryptocurrency trading platforms and analysts.

The future of Spell Token (SPELL) highly depends on the overall performance of the cryptocurrency industry. Most analysts and traders agree the token's price would hardly hit the $1 value in one or five years.

When you invest in cryptocurrency, make sure you use the right strategy. This type of investment is unsuitable for those with an asymmetric risk profile. Investing in the SPELL token could be the best choice for those with a high-risk tolerance and a solid financial position.

How high can the SPELL token go?

Before investing in the SPELL token or any other cryptocurrency, do your own research. Your decision should be grounded on your attitude to risk, your expertise in the market and how comfortable you feel about the risk of losing money. The last point is especially important. This is a rule of thumb for all traders: never trade with more money than you can afford to lose.