What is a 51 percent attack?

No matter how useful a new invention is, people will always try to misuse it. Cryptocurrency is by no means an exception to the rule. The blockchain's decentralisation and anonymity are often used to conduct illegal transactions or deceive people who invest their money in scam projects. If you neglect security measures when working with a blockchain, you can disclose your private keys to criminals and lose your cryptocurrency. On top of that, the crypto network itself is not completely secure. One potential threat to blockchain networks is a 51 percent attack.

What is 51 percent attack in blockchain?

Attackers who successfully conduct a 51% attack can:

That said, even a successful attack of this kind won't enable attackers to:

A 51% attack is one of the most well-known Proof-of-Work (PoW) cryptocurrency network vulnerabilities. Theoretically, a 51% attack can also be carried out on cryptocurrencies operating on the Proof-of-Stake (PoS) algorithm. To do so, attackers would have to purchase more than half of this cryptocurrency's coins, which makes the attack very costly and unprofitable.

The basis of a 51 percent attack is that the decision on which version of the blockchain is true is taken by the majority of participants (miners) in its network. In networks based on the PoW consensus algorithm, miners need to perform complex calculations to prove the work has been completed to add a new block. Whoever manages to solve the problem first gets a reward. The more computing power a miner has, the more likely it is that they'll solve the problem first. The preponderance of computing power makes it possible to carry out a 51% attack. As such, the version of the blockchain that is supported by more than 50% of the computing power is considered to be true. Therefore, an attacker controlling more than 50% of the network's hashing power has almost complete control over creating new blocks and what transactions will be included in them.

Blockchains are the most famous but not the only type of distributed ledger. Another variant of it, Tangle, is theoretically more vulnerable to such attacks. For a successful attack against Tangle, it's sufficient to control more than a third of the network's hashing power. That's why this kind of attack is called a 34% in similar logic to a 51% attack.

Examples of the most famous 51% attacks

A 51% attack is not just a theoretical blockchain vulnerability. In the relatively short history of cryptocurrencies, several such attacks have already occurred. We'll share some of the most famous ones. 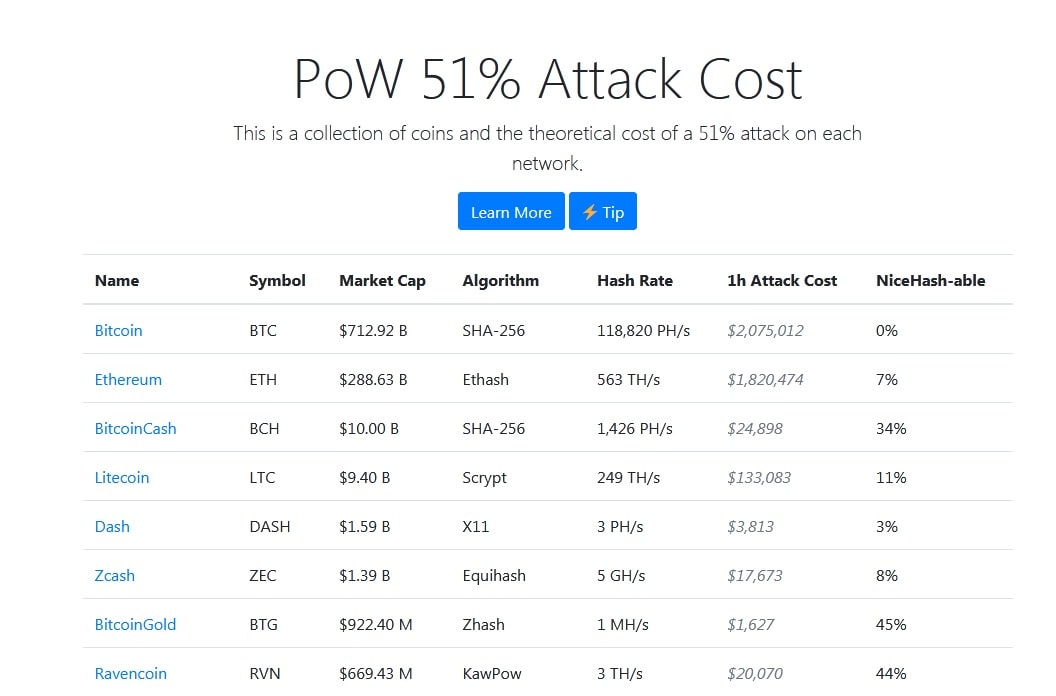 Given the enormous hashing power of the Bitcoin network, a 51% attack on it is highly unlikely. According to www.crypto51.app, the estimated cost of a 51% attack on the Bitcoin network at the time of the writing is $2,075,012 per hour. However, it's theoretically possible. Considering that most of the hashrate of the Bitcoin network is controlled by several of the largest pools, which are associations of miners who distribute their rewards in proportion to the hashing power they invest. If several such pools merge, they can carry out a 51% attack. But this is not profitable for the pools themselves since this could lead to a sharp decline in Bitcoin' price and the loss of users' trust. A similar situation already occurred in 2014 when the Ghash.io mining pool controlled more than 50% of the hashrate of the Bitcoin network for a short period of time. When this happened, the pool voluntarily reduced its share of the hashrate to 40% and promised not to exceed this threshold in the future. 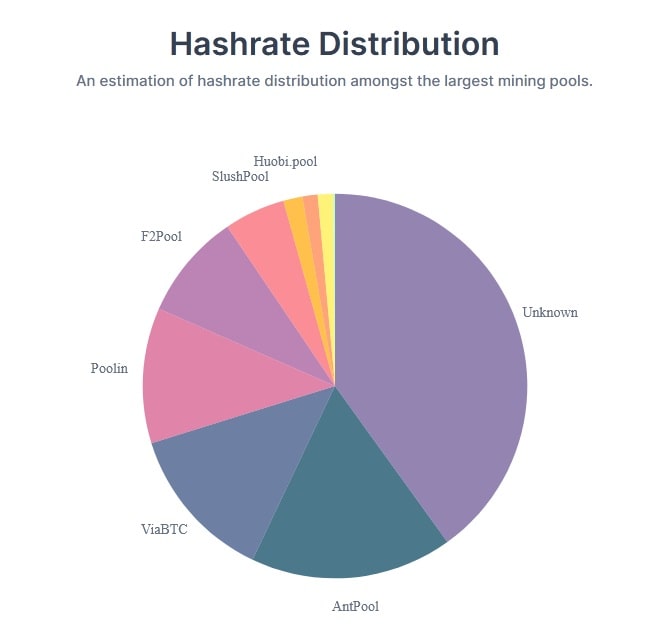 In August 2020, the Ethereum Classic (ETC) network was hit by three 51% attacks in a row. The latest attack led to the reorganisation of more than 7000 blocks (at that time, the equivalent of approximately two days of continuous mining). The attack resulted in the coin immediately falling back to 30th place in terms of market capitalisation, although at the beginning of the year, it was in 20th place. ETC's price in August 2020 fell by 33%, from $7.58 to $5.06. In addition to the fact that the attack caused the price to collapse, some exchanges stopped ETC deposits and withdrawals when the attack occurred. 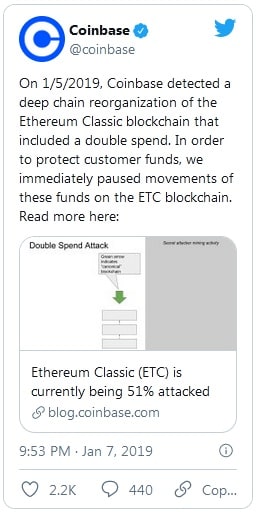 In May 2019, two large mining pools carried out a 51% attack on the Bitcoin Cash network. According to them, they prevented the theft of unprotected coins stored at addresses where anyone could take the coins. The coins remained in the network after the fork from Bitcoin in 2017 but were blocked by the developers until they were accidentally unlocked by a hard fork in May 2019.

How to prevent 51% attacks

The only reliable protection against a 51% attack is to make it unprofitable for cybercriminals to create conditions in which maintaining 51% of computing power will cost more than the potential benefit from an attack and double-spending funds. Currently, this can be achieved by creating a powerful network like that one of Bitcoin, switching to the Proof-of-Stake algorithm as with Ethereum 2.0 or by increasing the waiting time for funds withdrawal from cryptocurrency exchanges.