Our Biggest Crypto Giveaway Yet

We're giving away BTC, ETH, BCH, LTC, and ZEC along with account status upgrades for users in our largest draw offering to date!
To enter, simply deposit $100 into your trading account for an entry ticket.

Our Biggest Crypto Giveaway Yet

We're giving away BTC, ETH, BCH, LTC, and ZEC along with account status upgrades for users in our largest draw offering to date!
To enter, simply deposit $100 into your trading account for an entry ticket.

Cryptocurrency developers have different approaches to solving the question of how to limit the number of coins of a given cryptocurrency. Some, like Ripple, issue a certain fixed amount of coins from the very beginning. Others, like Ethereum, set a certain fixed amount of annual inflation. With the first cryptocurrency, Bitcoin, this issue is resolved using a mechanism called halving. Litecoin, which is kind of Bitcoin's 'little brother', inherited this method from it. So let's talk about Litecoin halving: its meaning, its effect on price, its dates and history and more. 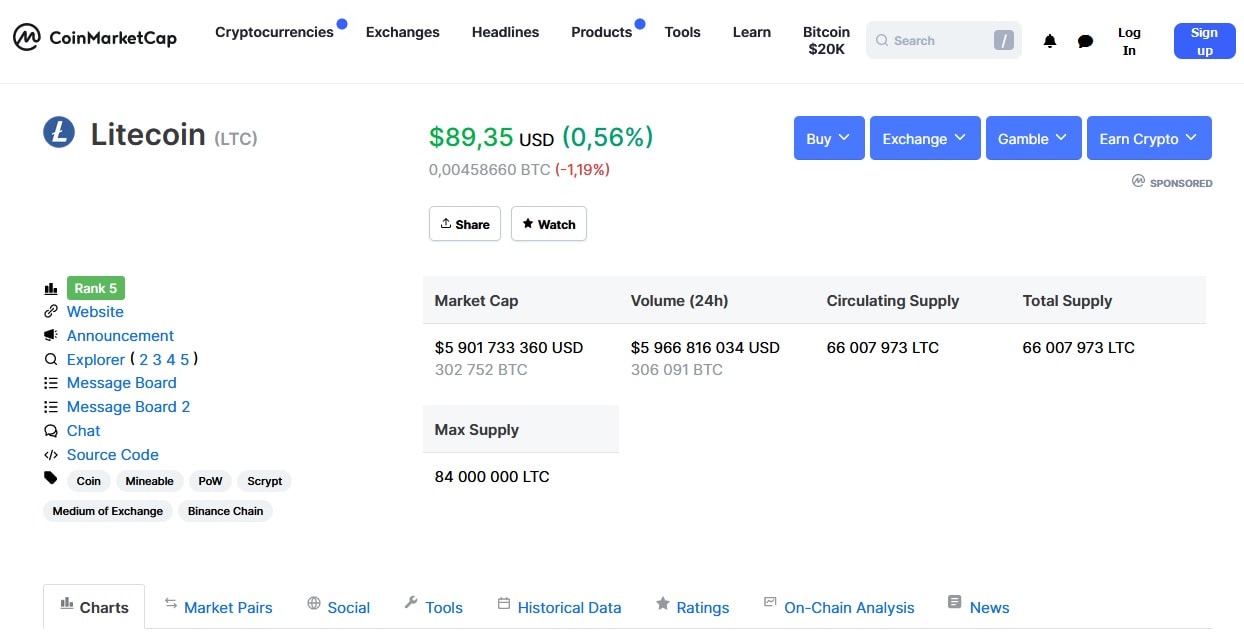 Reducing the incentive for miners is good for LTC because only serious people will remain in the space. As for the price action, it is difficult, and it depends a lot on the sentiment, but usually this kind of action is positive for the price.- Naeem Aslam, chief market analyst at ThinkMarketsFX.

What is Litecoin halving?

New Litecoins are created when miners add new transactions to blocks. The miner who added the block receives a certain amount of Litecoins as a reward for doing that. This amount consists of a fixed number of new Litecoins and transaction fees included in the block. Unlike the Bitcoin network, where new blocks are added approximately every 10 minutes, on the Litecoin network, blocks are added a little faster — once roughly every 2.5 minutes.

After every 840,000 blocks are mined, the block reward is halved. Considering the average block mining rate of 2.5 minutes, this occurs approximately once every 4 years. This event is called Litecoin block reward halving or simply Litecoin halving, and it's pre-programmed in the Litecoin algorithm.

The purpose behind Litecoin halving

The main purpose of halving is to control the supply of Litecoin. Unlike traditional fiat currencies, which are issued by central banks in whatever amounts they deem necessary, the supply of Litecoins grows at a constant rate that halves every 4 years. Thanks to halvings, the maximum amount of Litecoins that can be mined is limited and equals 84,000,000. This prevents inflation, a constant companion of national currencies. The rapid growth in the number of coins at the initial stage of cryptocurrency evolution solved the issue of their initial distribution and incentivised miners to mine this cryptocurrency. Thus, by the time of the first halving, Litecoin already enjoyed a certain level of popularity and adoption.

The gradual reduction in the supply of Litecoin through halvings keeps inflation at bay while simultaneously providing an incentive for miners to continue mining and thus keep the Litecoin network running.

The impact of LTC halving on miners

As you might guess, a decrease in block reward will inevitably affect miners' income. If the first halving had almost no effect on the Litecoin hashrate, causing only a short-term decrease of 15%, the second one caused a severe drop in the hashrate. This means that after the second halving, miners began to massively switch to mining other cryptocurrencies until the difficulty of Litecoin mining decreased to more acceptable values.

When is the next Litecoin halving?

The next LTC halving will happen around August 2023. During that event, the block reward will drop to 6.25 LTC. A visual countdown to the next Litecoin halving can be found on some websites, such as www.litecoinblockhalf.com.

Litecoin halvings occur and will occur approximately every 4 years until the block reward is less than the smallest possible fraction of Litecoin, 1/100-millionth. As with Bitcoin, this will happen after the 33rd halving. To date, only two halvings have occurred. Let's take a closer look at past halving dates and LTC's price behaviour around these dates.

Litecoin was created by Charlie Lee, a former Google employee. According to Lee, Litecoin was not intended to compete with Bitcoin but was designed to be used in smaller transactions. The Litecoin network was launched on 13 October 2011. In November 2013, the value of Litecoin experienced significant growth, and as a result, its market cap exceeded $1 billion. However, after that, its price steadily declined until May 2015.

Litecoin's first halving took place on 25 August 2015. Even before the event, starting from the end of May, the price was on an upward path. But, after reaching its peak on 10 July, it began to fall right up to the halving itself. After the halving, the fall stopped. But Litecoin did not experience any real significant growth until May 2017, when the entire crypto market experienced a sharp rise. In addition, in May 2017, the Litecoin network activated the SegWit protocol, which probably had a positive impact on its price. On 18 December 2017, Litecoin reached its all-time-high price of $357.

There were no LTC block halvings during these dates.

The last Litecoin halving to date occurred on 5 August 2019. The half-year bullish trend turned bearish at $146.95 on 22 June 2019. While many people expected the halving to have a positive impact on the price, that did not happen. After the halving, the price continued to fall.

Many people might ask "will Litecoin halving increase its price?" The honest answer is: nobody knows for sure. The effect of Litecoin's halving on its price is a highly debatable issue. The main stances on this issue are:

Thus, the only thing that can be said for sure is that LTC's halving is unlikely to have a noticeable impact on its price in the short term.

Decentralised apps: what are dApps?

04 Dec, 2020
What does dApp stand for? What are dApps used for? What is a dApp? Many people have no idea, so let's start from the very beginning.
Next article