What is the best cryptocurrency to mine?

Many people who learn about cryptocurrency mining as a way to make money start trying to find out more and inevitably come to the question: "What is the most profitable cryptocurrency to mine?" The current number of cryptocurrencies is mind-blowing. There are 7,500 registered on the famous coinmarketcap.com website dedicated to cryptocurrencies! Many of them are mineable, so finding the best coin to mine is not an easy task.

Which cryptocurrency mining is profitable?

With a sharp rise in the popularity of cryptocurrencies in 2016 and 2017, the mining 'gold rush' that accompanied it led to a huge increase in competition among miners. While prices for cryptocurrencies have steadily grown, this rise has offset the growth of competition to some extent. But after the protracted bear market began in 2018, more and more miners found themselves losing money. These losses forced many of them, especially miners with small operations, to leave the business. The ones that remained continued to work at a loss in the hope of a market reversal. The price recovery that started in 2019 has renewed interest in mining to a degree.

An important feature of most mineable cryptocurrencies is that their mining difficulty varies according to the competition among miners. The result is a kind of self-regulating mechanism. When it becomes profitable to mine a coin, the number of miners increases, which leads to increased mining difficulty and lower profitability. This, in turn, leads to a decrease in competition, after which the difficulty decreases and profitability starts growing again.

You can learn about the profitability of Bitcoin mining and what factors it depends on in our other blog post. In this article, we'll focus primarily on altcoins.

The best coin to mine for immediate profit

If you don't own specialised mining equipment called ASIC (Application-Specific Integrated Circuit) but use GPU for these purposes, then your choice of coins for mining is much wider (although the profitability is lower). Which particular coin is most profitable with mining depends greatly on your video card model. However, for most modern video cards, Ethereum Classic (ETC) mining is currently the most profitable altcoin. ETC is the original version of Ethereum. The two split as a result of a hard fork in 2016.

The best coin to mine long-term

Since far from all miners are prepared to constantly monitor the cryptocurrency market, many of them choose to mine coins that are more promising from a long-term perspective. If you're one of these miners, then Ethereum (ETH) is definitely the coin of choice for you. Ethereum is a decentralised open-source blockchain platform for creating decentralised apps and smart contracts. Its native cryptocurrency is the second-largest cryptocurrency in the world.

However, not tracking the state of the cryptocurrency market and the current profitability of mining at all isn't a good idea. Miners who can navigate the market and quickly switch to mining the most profitable coins are able to make noticeably higher profits if they don't forget to regularly convert the mined coins into more stable, less risky ones, such as BTC, ETH or even stablecoins like USDT. Keep in mind, however, that many highly profitable coins aren't well-known and have poor liquidity, not to mention that their prices are subject to much higher volatility.

The best SHA256 coin to mine

Since the SHA-256 encryption algorithm is not ASIC-resistant, the only profitable method for mining cryptocurrencies based on this encryption algorithm is mining with ASICs. At the moment, of all SHA-256 cryptocurrencies, the most profitable for mining is Bitcoin SV (BSV), the fork of Bitcoin Cash, which appeared in 2018. Interestingly, Bitcoin Cash itself is a fork of Bitcoin.

The best ways to mine cryptocurrency

The best method for mining cryptocurrency depends on the specific cryptocurrency. Below, we'll take a look at the most popular of the currently existing mining methods without touching on exotic ones, such as mining coins with the Proof-of-Capacity consensus algorithm using HDD.

Although ASIC mining is traditionally associated with Bitcoin and other coins based on the SHA-256 algorithm, this algorithm is not the only one available for ASIC mining.

Currently, the most profitable coin for this mining method is Zcash (ZEC), a cryptocurrency with anonymous transactions. It's based on the Equihash encryption algorithm, so only ASICs created to work with this algorithm can be used to mine it.

GPUs are currently the best method to mine cryptocurrencies based on ASIC-resistant algorithms. Which specific coin to choose for mining depends on your video card model. For most AMD Radeon video cards, Ethereum Classic is a safe bet. Identifying the best cryptocurrency to mine with Nvidia is a little trickier. Depending on your specific model, it could be Ethereum Classic (ETC), Ravencoin (RVN) or Zcoin (XZC).

From a long-term perspective, the best cryptocurrency to mine with a GPU is Ethereum.

Regardless of which coin you choose, before you start mining, it's better to use one of the online mining calculators, such as whattomine.com or minerstat.com. 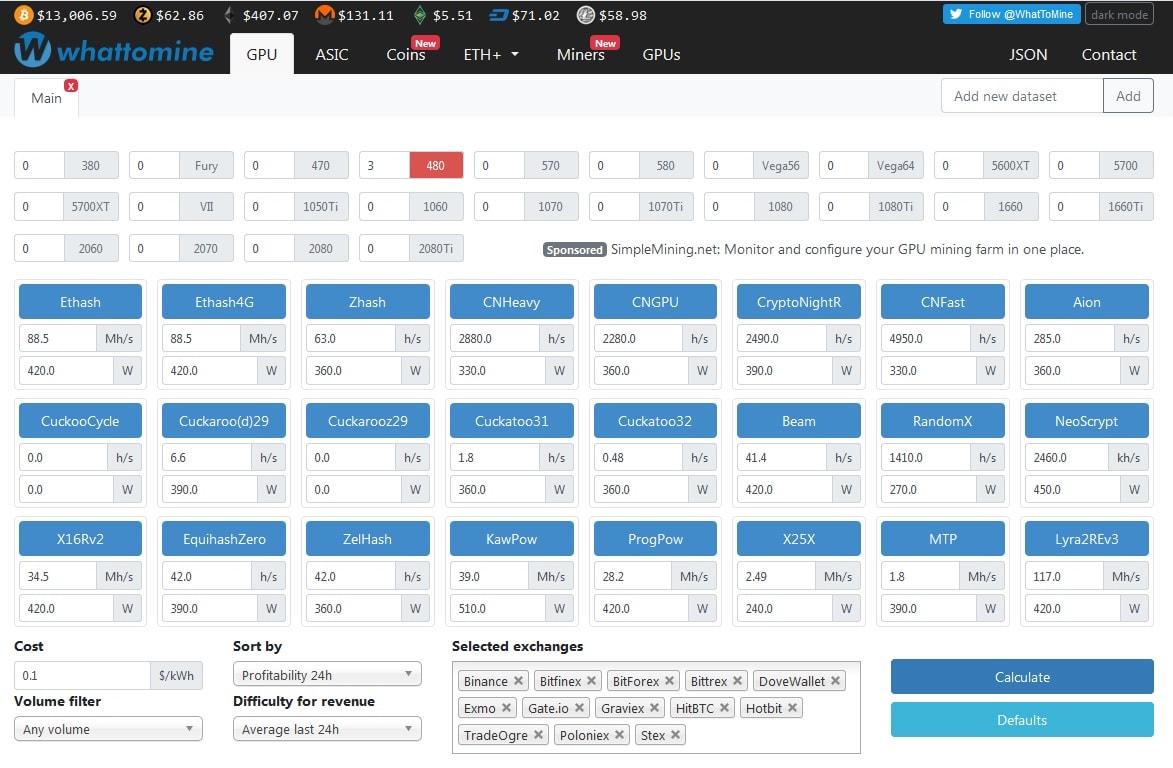 Currently, CPU mining is generally considered to be obsolete and unprofitable. However, there is a fairly well-known coin that is based on a CPU-friendly algorithm. This is Monero (XMR), one of the most popular cryptocurrencies with anonymous transactions and the best currency to mine with a CPU. 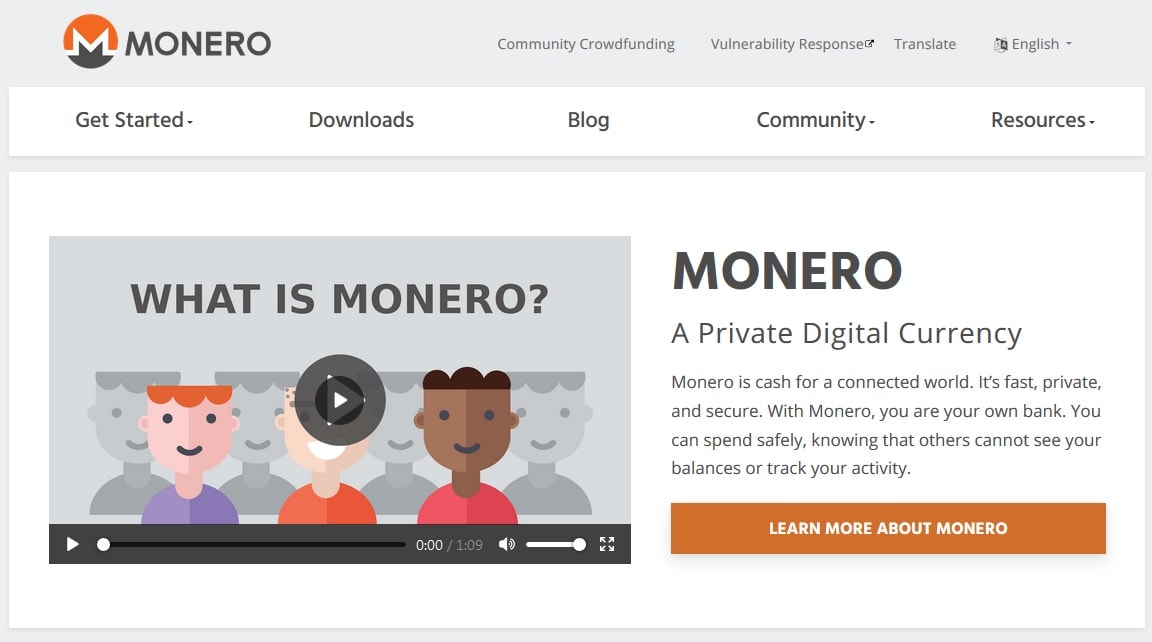 A history of the best cryptocurrency to mine

Having examined the current situation, let's take a look at the history of mining.

Cryptocurrencies experienced an unprecedented surge in popularity that year. This, in turn, led to the mining gold rush. The prices of most cryptocurrencies steadily grew, as did the number of people who wanted to make money mining.

The best cryptocurrency to mine in 2017 was Ethereum. This was due to its popularity, stable price growth and very favourable investment-to-profit ratio. Other fairly profitable coins were Ethereum Classic, Litecoin, Dash and Monero.

The long decline in the crypto market in 2018 led to a drop in miners' income and forced many of them to go out of business. Nevertheless, some miners, even in those conditions, managed to make a profit. The best coins to mine in 2018 were Ethereum, Litecoin, Dash and Zcash.

In 2019, the crypto market finally saw a turning point. Bitcoin's long bearish trend line broke. Following Bitcoin, the rest of the crypto market recovered. Of course, that also affected crypto miners' revenue. The best coins to mine in 2019 were Ethereum, Litecoin, Monero, Zcash, AEON and Electroneum.

If you don't have enough time to figure out all the ins and outs of cryptocurrency mining, or you're just thinking about mining a risky investment, there's still an option for you.

On 29 June 2020, the cryptocurrency trading platform StormGain announced the launch of its own Bitcoin cloud miner. To start mining, all you have to do is to install the StormGain mobile app and register an account. After that, tap 'Start Mining' in the Cloud Miner section, and the app will do the rest. On top of that, it's completely free!