On 3 January 2009, the first Bitcoin block was generated. That’s how the cryptocurrency’s creator, known only by the pseudonym Satoshi Nakamoto, became the first cryptocurrency miner in history. Thanks to the very low competition in the early years of Bitcoin’s existence, early miners were able to accumulate large amounts of Bitcoins. Those who had the patience or intuition to wait for the exponential rise in Bitcoin’s price made good money. Now Bitcoin mining has become a whole industry with high competition, and many of those who are interested in cryptocurrencies are wondering, “Is Bitcoin mining profitable today?” Let’s take a look.

I do think Bitcoin is the first [encrypted money] that has the potential to do something like change the world. — Peter Thiel, co-founder of Paypal.

What is Bitcoin mining today?

Bitcoin mining is the process of verifying Bitcoin transactions and adding them to the blocks of the blockchain. This is how the Bitcoin network keeps running. To mine a block, miners solve specific mathematical problems on their mining equipment. The first miner to solve a problem gets a reward that consists of all commissions for the transactions added to the block and a fixed block reward. That block reward is the only way to create new Bitcoins.

Despite the fact that the bulk of mining capacity is currently concentrated in the hands of large companies that place their big mining farms in regions with low electricity costs, the threshold for entering this business is still within reach for ordinary people.

It really depends on many factors. The fact that the difficulty of mining is constantly increasing means that total hashing power is growing. This, in turn, means not only that many miners are continuing to work but that investments in mining are continuing, too. But will it be profitable for you? This question is difficult to answer since many variables have to be factored into the calculation, such as:

The difficulty of the Bitcoin network is a relative measure of how difficult it is to mine a new block compared to the minimum possible difficulty of mining a block.

As the overall hashrate of the Bitcoin network increases, so does the speed for mining new blocks. To prevent this from happening, the difficulty of Bitcoin mining changes every time the total computational power of the mining equipment changes. Every 2016 blocks, the difficulty of the Bitcoin network is recalculated so that the time for generating a new block at the current total mining power is 10 minutes. Since the average generation time for one block is about 10 minutes, the difficulty is recalculated approximately every two weeks. Over the past three years, the difficulty has increased more than 16 times. At the time of writing, it is 19.298 trillion.

Of course, the higher the difficulty, the lower the chance for an individual miner to be the first to solve the required mathematical problem and receive a block reward. That is why miners nowadays prefer to unite in mining pools, which allow them to mine blocks through joint efforts and share the received block reward among participants.

How profitable is Bitcoin mining?

To calculate how profitable Bitcoin mining will be in your specific case, you can use an online mining calculator, such as www.coinwarz.com, www.cryptocompare.com or www.minerstat.com. Enter your equipment’s mining hashrate and power consumption, as well as the electricity price and commission of the mining pool you have chosen. Keep in mind that electricity prices can vary depending on the time of day and other factors. Don’t forget about the associated costs, such as the cost to cool mining equipment.

Note that mining difficulty is likely to grow, so if the calculator’s settings allow, try simulating the increase in difficulty and its impact on profitability. Calculate the breakeven price of Bitcoin in your case and consider your possible actions if the actual price falls below that price level.

Don’t forget about taxes, either. Study the laws of your country regarding taxation of cryptocurrency mining and take them into account when deciding whether to invest in mining.

At the time of writing, the daily revenue from Bitcoin mining excluding any costs is about 0.0006515 BTC per 100 TH/s, which at the current Bitcoin price, is $7.43. Even using a modern and efficient ASIC Antminer S19 Pro, with an electricity price higher than $0.10 per kWh, Bitcoin mining becomes unprofitable.

Ways to mine Bitcoin today

Mining hardware has evolved considerably in just a few years. Starting with using PCs for CPU mining, miners quickly moved to more efficient GPU mining. By the summer of 2010, the popularity and price of Bitcoin had grown so much that its mining began to bring some real money, albeit not much. Mining became commercial, which means that competition could not but lead to a technological race. Unlike CPUs, GPUs are optimised to perform many simple mathematical operations in parallel, which is way more efficient for mining.

However, by 2011, some miners began to switch to more energy-efficient devices for mining: Field-Programmable Gate Arrays, or FPGAs. The FPGA mining devices were quite expensive, but much more compact, stable and efficient than GPU farms. And yet, video cards remained the most popular mining solution because they were affordable.

The next important step in the evolution of mining devices was the transition to the use of Application-Specific Integrated Circuits (ASICs). ASICs are highly specialised computer chips that can perform only the one task for which they were designed. As such, equipment was created whose sole purpose was to mine Bitcoins. Designing and producing these devices is a long and very expensive process. For this reason, they appeared only after mining became a large and profitable business. Since they first appeared on the market in 2013, ASIC performance has constantly improved. However, after 2015, this process started to slow down. Experts now say that we have approached the limit of ASICs’ efficiency.

In sum, the following hardware options for Bitcoin mining are currently available:

CPU mining was the first and the most inefficient way to mine Bitcoins. The transition to GPU mining was a huge leap compared to CPU mining, so CPU mining really became unprofitable long before 2020.

GPU mining was the main Bitcoin mining method until the advent of ASIC miners in 2013 when it started to be replaced rapidly. Currently, this method of mining Bitcoin is uncompetitive and unprofitable.

The FPGA miners that appeared back in 2011 never gained much popularity. At first, they were too expensive compared to GPU miners, and the emergence of ASICs made them obsolete.

If you don’t have enough money or time to invest in a full-fledged mining farm, you can consider cloud mining. Cloud mining is mining on remote hardware rented from a cloud mining company that sets up and maintains it. Such companies usually sell contracts for the temporary use of their mining equipment. During the time specified in the contract, all the cryptocurrency mined on the leased mining power is transferred to the contract’s purchaser.

Although this option for generating income from mining may seem convenient and attractive, it should be approached with caution. Too many companies that present themselves as cloud mining providers are nothing more than Ponzi schemes. Even if the company is a legit cloud mining services provider, purchasing contracts is often unprofitable because the leased equipment simply does not have enough time to return the invested funds due to the growing difficulty of mining.

What is StormGain Bitcoin mining?

This summer, the StormGain cryptocurrency trading platform launched its own cloud mining service. It’s a unique tool that allows users to mine Bitcoins right from their phone. It is, in fact, a cloud mining service. However, unlike others, it’s completely free. Starting mining is as simple as downloading the StormGain mobile app and registering an account. After that, open the Cloud Miner section and tap ‘Start Mining’. The app will connect to StormGain’s remote mining rig, and the rig will do the rest. Repeat this every four hours to keep the mining going. 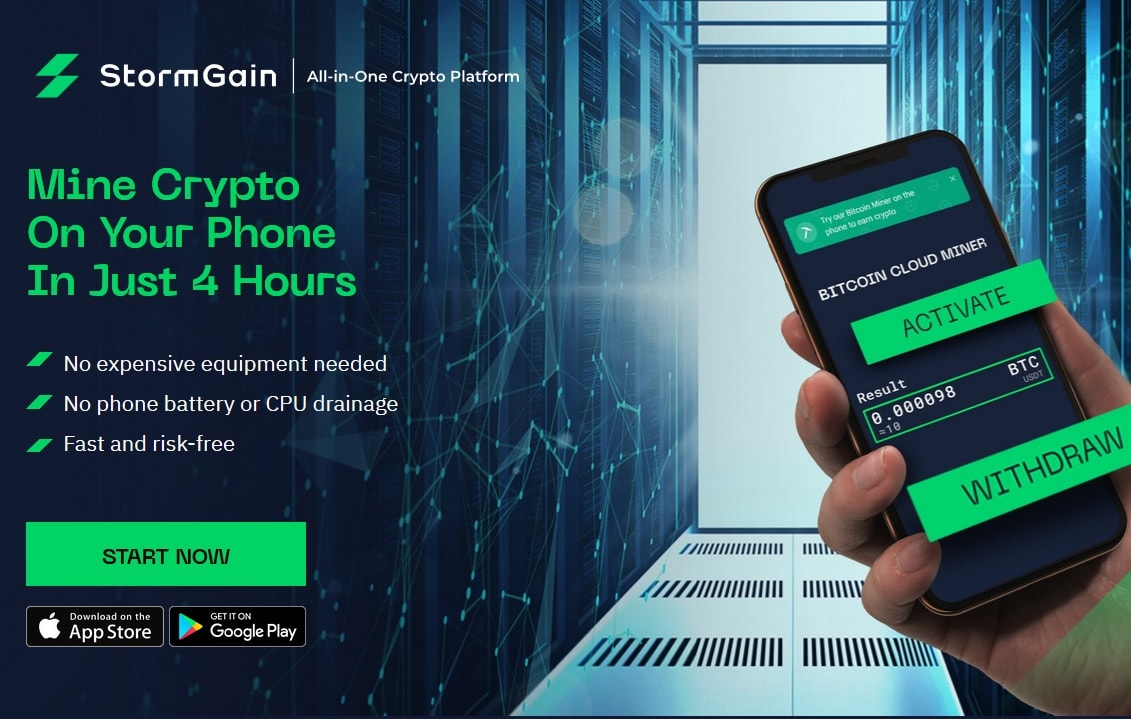