We've seen so many impressive blockchain projects launched recently. Bitgert (BRISE) is one of the biggest attention-grabbers in the crypto world because of the controversies surrounding it and the remarkable scalability and many stunning features it has integrated with. Bitgert is a cryptocurrency-engineering organisation that has developed blockchain-based products in the decentralised finance, NFT, and metaverse worlds. The organisation claims its goal is to help users innovate and solve problems to improve the quality of their lives using blockchain technology. In this article, we will take a closer look at what is Bitgert (BRISE) and the major Bitgert (BRISE) price predictions for 2023 and beyond.

What is Bitgert (BRISE) Chain?

Bitgert (BRISE) is a cryptocurrency platform that aims to provide an affordable and highly scalable environment for multiple projects, ranging from web3 and metaverse to NFT and DeFi. The project was originally launched under Bitrise with its native token BRISE on BNB Chain in July 2021. However, the project was renamed to its current name Bitgert in December 2021. The rebranding didn't affect the project's native token.

In February 2022, the project launched its blockchain network that uses a proof of authority (PoA) consensus algorithm. The Bitgert Chain (or Brise Chain) network advertises itself as a platform with zero gas fees and the capacity to process up to 100,000 transactions per second. Although the project is promoted as one that doesn't charge users anything to run the transactions, in reality, a tiny fee is involved in using the Bitgert Chain.

What is BRISE in Cryptocurrency?

Before discussing Bitgert future price predictions, let's focus on the basics of the project's native token - BRISE. Originally, the BRISE token was launched on BNB Chain when Bitgert was running as an application based on that chain. Bitgert initiated a buyback mechanism by which it bought and burned the BRISE tokens. The buyback program is driven by the project development's team intent to replace the entire supply of BRISE tokens based on the BNB Chain with the ones natively issued on the Bitgert Chain.

The main use cases of the BRISE token include staking and paying Bitgert's gas fees. The token is also used on decentralised apps (dApps) linked to the platform.

Staking BRISE tokens is possible via BNB Chain and Bitgert Chain. You earn BUSD rewards for staking BRISE in both cases. As shown in the image below, staking is possible for 30, 60, 90, and 180 days. The longer the staking period you choose, the higher the annual percentage yield (APY) you can earn. At the time of writing this Bitgert (BRISE) price prediction (17/01/2023), the current APY rates (as of 19 November 2022) start at 6% for 30 days. 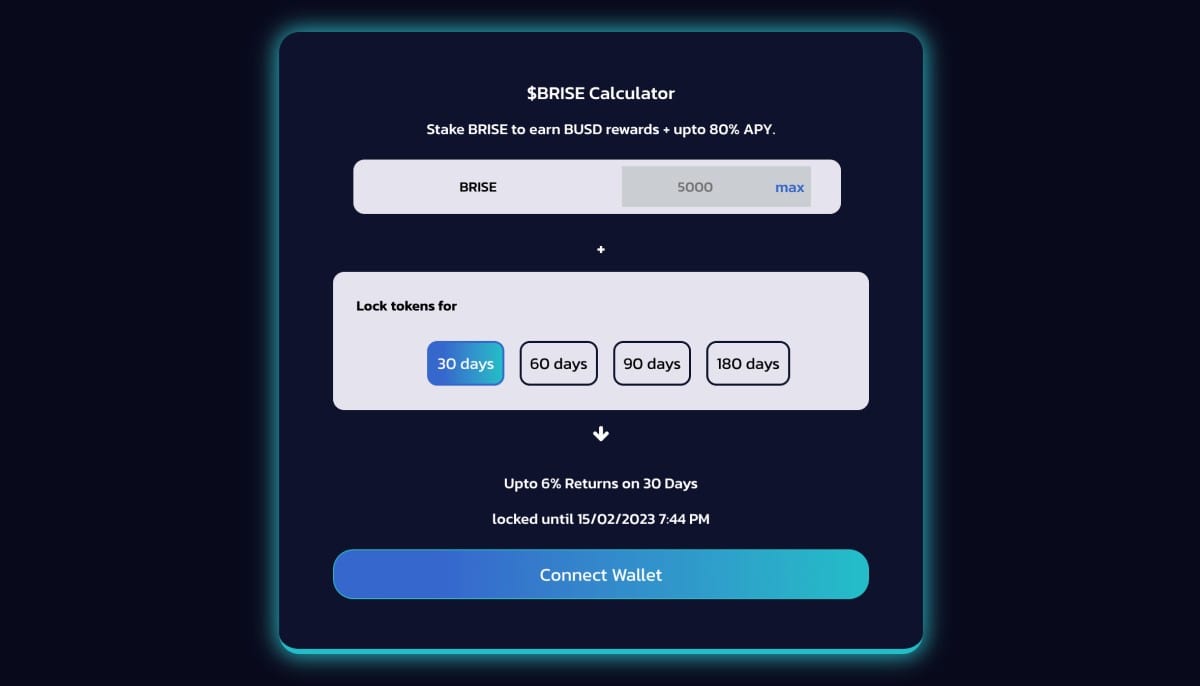 One of the best features of BRISE staking rules is the lack of minimum staking amount requirements. A user can start staking BRISE tokens at the smallest amount.

The Bitgert project was released under the name Bitrise in July 2021, with its official website's introduction and the BRISE token's placement on Pancake Swap, Binance's DEX. At the time of the project's launch, the BRISE token was priced at $0.000000008, which is $8 for one billion BRISE.

The project was first introduced on Binance Smart Chain and paid out incentives using Binance Coin. In December 2021, the project changed its name to the current one - Bitgert. The biggest advancements in the blockchain project happened in February 2022, introducing the native BRISE Chain supported by the BRC20 smart contract. The launch of the project's native blockchain allowed developers to create dApps.

According to the whitepaper, Bitgert prioritises security, stability, and extensibility. The project represents a fully customisable, constantly evolving, low-cost blockchain network. Thanks to smart contracts, consensus algorithms, and block intervals, Bitgert can reach the performance of up to 100,000 TPS. The project's developers believe that Bitgert can solve the problems of trust in interpersonal communications and organically integrate societal consensuses and value exchange into an inseparable whole.

The project's development team created a blockchain-based ecosystem to solve real-world problems caused by centralisation issues. Bitgert provides decentralised services to many projects in the real world, including transportation services decentralisation. In addition, the Bitgert team has developed a project that addresses the most common difficulties blockchain products face in adopting cryptocurrency. Some of the most common issues solved by the Bitgert (BRISE) project include but are not limited to the problems caused by poor scaling, high transaction costs, and security problems.

Following the blockchain project's release, Bitgert has released a limited number of features explaining its performance.

Before discussing Bitgert future price predictions and the price history, it's worth pointing out that the token's past performance shouldn't necessarily be used as an indicator of its future results.

Based on the data from 17 January 2023, the general Bitgert token price prediction sentiment is neutral. In addition, the Fear and Greed Index is Neutral. Bitgert recorded a 6.60% price volatility over the last 30 days, indicating that it's a good time to invest in Bitgert.

The token has been trading below its 200-day simple moving average for the past 126 days. The 200-day SMA is often used as a long-term trend indicator, and when a stock is trading below it, it can be seen as a bearish signal.

The Relative Strength Index (RSI) is a momentum oscillator that is commonly used to signal whether a cryptocurrency is oversold (below 30) or overbought (above 70). A value of 59.37 indicates that the market is neutral and not overbought or oversold. However, it is important to note that the RSI is a lagging indicator, meaning it is based on past price data. It should be used with other technical indicators and fundamental analysis before making any investment decisions.

Is Bitgert token a good investment?

It is difficult to say whether or not Bitgert (BRISE) is a good investment. The low price of the BRISE token, coupled with a high maximum supply, makes it difficult to envision the token reaching substantial gains. Additionally, the project's limited user base and questionable legitimacy raise further concerns. However, it is worth noting that the token has reached an all-time high in the past, and the project's marketing efforts may draw in investors. Ultimately, it is important to conduct thorough research and due diligence before making any investment decisions and to be aware of the risk involved in cryptocurrency or blockchain projects.

Make sure you check out Bitgert future price predictions if you're considering investing in digital currencies and want a decent return on your money.

According to WalletInvestor, the future for Bitgert and its token BRISE may be challenging over the next 12 months. They predict that the token may collapse to $0.000000312 by December 2023, a significant decrease from its current value. Additionally, it is important to remember that the cryptocurrency market is highly volatile and subject to many external factors that can change market conditions.

Little historical data is available for Bitgert, making it difficult to make accurate predictions about its future price movements. It is important to keep this in mind when considering long-term price forecasts and take them with a grain of salt. It's also important to remember that any predictions about the future price of Bitgert or any other cryptocurrency are uncertain and based on assumptions and past data.

How high can the BRISE coin go?

Overall, BRISE future price predictions tend to be bullish, with predictions suggesting that the token could reach a high value in the future. There is a bearish trend that persists, and it could lead to the token's value remaining flat at its current levels, even if its initial surge propelled it to a market cap of several billion dollars. The token's price is expected to reach $0.0000136947074 by December 2023. The lowest price for Bitgert (BRISE) for 2023 could be $0.000005052651788.

23 Jan, 2023
Experts from Uniswap, the largest decentralised protocol by turnover, and economists from Circle prepared a
Next article