The decentralised finance (DeFi) sector, which is a logical development of the ideas behind cryptocurrency, is evolving onwards. Since its emergence, many projects have been launched, both promising and dubious. In this article, we'll talk about one project that has sparked controversy in the crypto community. We'll explore the HEX platform, its origins, as well as its native HEX token and its price predictions.

HEX is a high-yield certificate of deposit that the developer claims to be the blockchain equivalent of a corresponding traditional banking product. 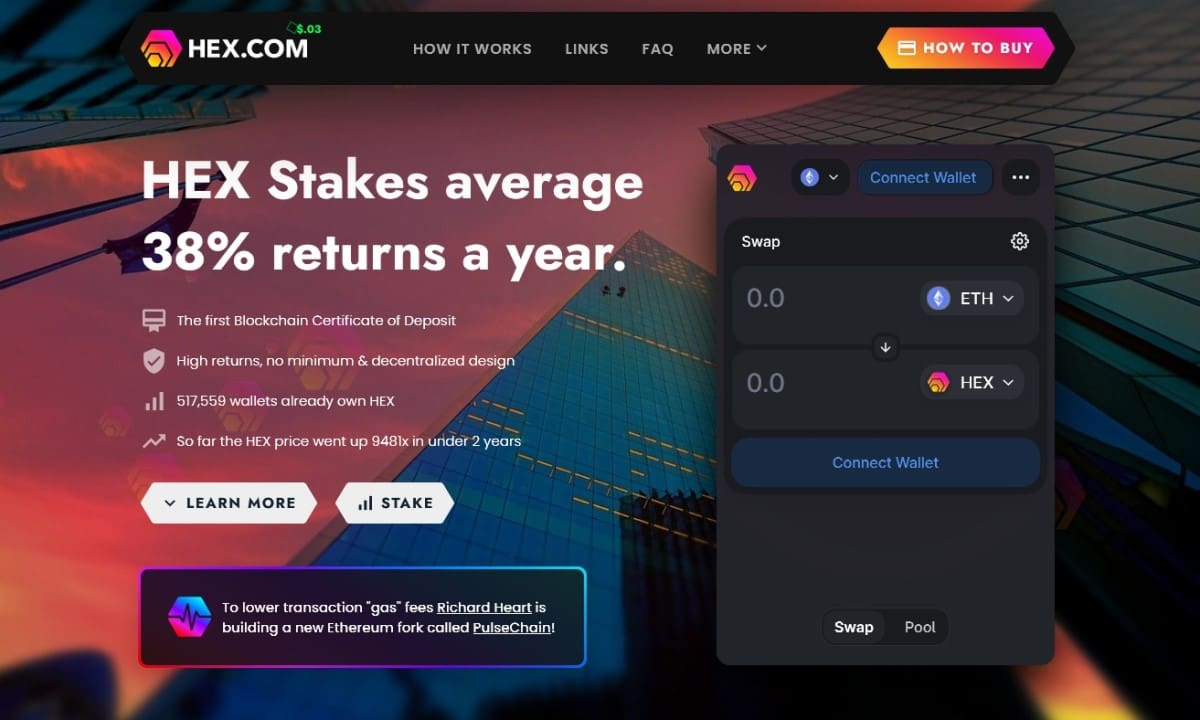 HEX has no team. Moreover, HEX has no roadmap. In addition to that, HEX has no partnerships. HEX has no promises. HEX is code. It is complete. — Richard Heart, Founder of HEX.

The history of HEX

HEX was launched on 2 December 2019 by Richard Heart (real name Richard James Schueler). According to the founder, HEX was already a complete product once it launched and did not need any further development. The identities of the development team, if any, are kept secret, as is the current whereabouts of the founder himself.

For the first year after the launch of the project, the start-up phase lasted. During that phase, Bitcoin holders could get HEX for free. It was also possible to send Ethereum to a specific address and receive HEX tokens in return.

In early November 2022, the US Securities and Exchange Commission (SEC) issued a subpoena to influencers promoting HEX as part of its investigation.

HEX is an ERC-20 token on the Ethereum blockchain. HEX uses the Ethereum network for transactions, while the consensus code and staking mechanism are written into the HEX smart contract.

HEX is advertised as a store of value and a blockchain equivalent to a certificate of deposit used in traditional financial markets. A certificate of deposit is a common service in traditional banking, where the customer stakes funds in an account, and the bank uses them for a certain period of time, for which it pays interest to the customer. HEX users also have the option of staking their HEX tokens for a certain amount of time and being rewarded in HEX tokens for doing so. Compared to traditional certificates of deposit, HEX promises a very high yield, 38% APY on average.

Unlike traditional certificates of deposit, however, HEX pays interest not from the funds' use but from the additional issuance of tokens, i.e., from inflation. But despite the high yields, inflation is maintained at a relatively low level of 3.69%. This disproportionate ratio of income to inflation is achieved by the fact that only a small percentage of tokens are staked for income and by penalties for premature or too-late withdrawals.

It's also worth noting that a specific address, called the 'Origin address', received a copy of all bonuses during the launch phase. After the end of the launch phase, this address continued to receive half of all penalties for withdrawing staked funds prematurely or too late.

Shortly after the launch, the token price started rising steadily. The price showed a particularly sharp rise in the second half of April 2020. After reaching a local high of $0.0061, the price began a sideways movement, which lasted until the end of October 2020. In December 2020, the price resumed its steady rise. At the beginning of May 2021, growth accelerated sharply, and the price reached its all-time high on 16 November 2021. This was followed by a prolonged price decline, which continues to this day.

The HEX price continues to move in a wide downward channel. On a more global scale, however, it has formed a downward wedge pattern, indicating a possible trend change in the future. The MACD and the moving averages indicate bearish sentiment. The nearest support levels are $0.022 and $0.014. The nearest resistance levels are $0.035, $0.065 and $0.098.

At the moment, all indications are that the HEX price will continue to move in a downward channel, at least until the end of the year.

What do popular forecasting services think about the prospects of the HEX token? Let's find out.

As severe a drop in the price of HEX is expected by Wallet Investor, so impressive a rise is predicted by Gov Capital. They believe the price will reach $0.224 in a year and $1.421 in 5 years.

Is the HEX coin a good investment?

The market for certificates of deposit is very large, and successful decentralised projects in this niche are in demand. However, the HEX project has a surprisingly extensive list of prominent red flags:

Given the above, investing in this project is extremely risky.

How high can the HEX coin go?

Although a temporary rise in the token price during the next bull run cannot be ruled out, it seems very unlikely that it could approach its all-time high, let alone exceed it.

In the near term, further price declines are most likely, possibly breaking the support level of $0.022.