How to mine Ethereum (ETH)?

Ethereum was created in 2015 as a platform for developing decentralised applications. The platform’s eponymous internal cryptocurrency became the second-most-popular cryptocurrency after Bitcoin. The relative simplicity of Ethereum mining, its widespread presence and its popularity have led many people to wonder how to mine Ethereum.

We set up a small Bitcoin and Ethereum mining operation... that is now amazingly making a lot of money. - Abigail Johnson

What is Ethereum mining?

Ethereum mining is a process that verifies new transactions in the Ethereum blockchain and their addition to blocks combined with issuing the crypto coins.

It’s based on solving mathematical equations on the appropriate hardware. The first miner to solve an equation gets a 2 ETH reward per block as well as all commissions for the transaction added to the block. Although only a total of 18 million new ETH can be crafted a year, there is no limit on the total number of coins that can be issued, unlike Bitcoin.

How to mine Ethereum using different methods

There are several ways to mine ETH. No matter which one you choose, you’ll need an Ethereum wallet before you get started.

We won’t review how to create your own Ethereum mining pool since competition in this area is very high and doing so requires extensive investment. Instead, we’ll look at more affordable methods.

Due to the high number of ETH miners, the more complex the task is, the higher the reward for a block is. In these conditions, every miner has relatively low chances of solving the equation and getting the reward. So-called mining pools solve this problem. They’re created to combine the computing power of several individual miners, to reduce random factor and to upgrade mining efficiency.

A mining pool is a server that breaks down a mathematical equation into smaller equations and distributes it among connected computers. When pool participants solve the equation together, the reward is distributed among them, as well.

How to join a mining pool Ethereum

The most popular Ethereum mining pools are Ethermine, Sparkpool, F2pool, Nanopool and 2miners. When choosing a mining pool, pay attention to the: 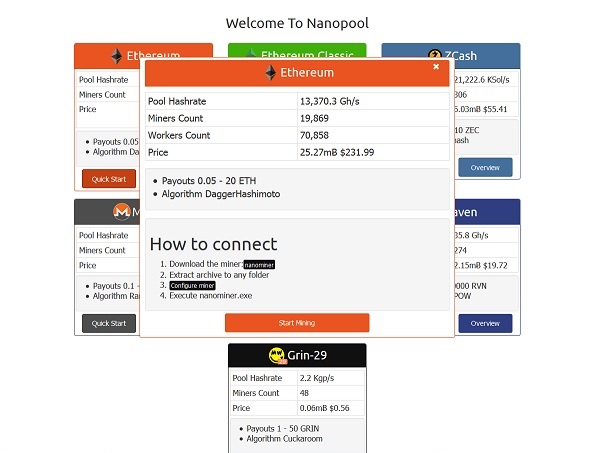 It’s quite easy to join a mining pool, even as a newcomer. Most large pools have detailed instructions on how to configure your mining software and connect to the pool.

Cloud mining leases mining equipment. In this case, the leasing company (lessor) owns the equipment and maintains it. The lessee pays for time the equipment works. All the coins mined during the lease time are transferred to the lessee’s wallet. While this comes with certain benefits — such as not needing to buy, install or maintain equipment and no risk of damaging it — this method also has some definite downsides. The main disadvantage of cloud mining is the risk of a decrease in Ethereum’s price, which would make a lease contract a loss. The other thing you should keep in mind is the high risk of fraud. In any case, take time to find the most reliable service. If you want to test cloud mining for free, try the new Cloud Miner tool on the StormGain platform.

If you want to learn how to mine Ethereum solo in 2020, think twice. Mining pools appeared for a good reason. In the current competitive environment, you would have to invest a lot of money in equipment just to have a chance of getting a reward for an Ethereum block.

The average time it takes a solo miner to find a block can reach up to several weeks or even months.

How to mine Ethereum on Windows

For successful Ethereum mining on Windows, you’ll need to have Windows 7 64-bit or a later version. These are the steps to start mining:

How to mine Ethereum on Mac

Mining Ethereum on a Mac is commonly considered ineffective and not really worthwhile. Most popular Ethereum mining software programmes don’t have Mac versions. Nevertheless, it is still possible by using a Graphical User Interface (GUI) miners like Minergate. To mine Ethereum with Minergate, you need to:

Unfortunately, even with Minergate, GPU mining on Mac is still unavailable.

When calculating the profitability of Ethereum mining, remember that there are plans for the Ethereum blockchain to switch to a Proof of Stake consensus algorithm at a currently unknown date. It will no longer be mineable after that.

How to calculate profitability

The profitability of Ethereum mining depends on too many variables to be calculated accurately. However, you can still calculate the current estimated profit. To do so, you need to know the hashrate of your mining hardware, its power consumption and power cost. Simply input these numbers into an online calculator, and you’ll get your estimated profit. Don’t forget about such important variables as Ethereum price fluctuations and increasing mining difficulty. 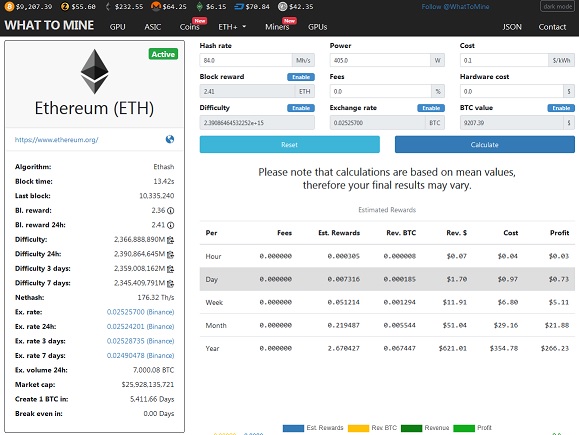 How long does it take to mine 1 Ethereum?

It depends on the mining equipment’s hashrate and constantly changing difficulty. Still, even with a powerful and expensive AMD Radeon VII GPU and assuming the current mining difficulty stays the same, it’ll take about half a year to mine 1 Ethereum.

Special mining software is an essential tool for Ethereum mining. Here are 3 of the most popular programmes for that.

ETHminer is an established Ethash GPU mining software. It enables you to mine all coins based on the Ethash algorithm (Ethereum, Ethereum Classic, Expanse, Musicoin, etc.). You can download the programme and find a guide to it on Github.com. 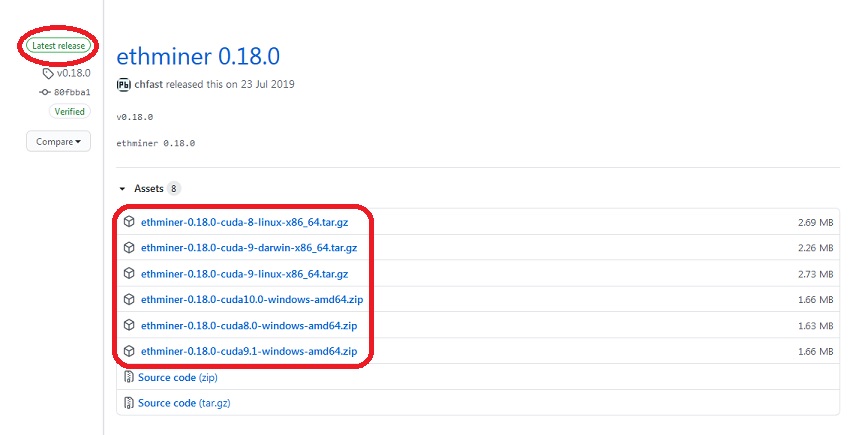 This is another of the most popular Ethereum miners. Unlike the other miners listed here, it supports so-called ‘dual mining’ mode, which allows users to simultaneously mine Ethereum and another coin from a limited list (such as Decred or Siacoin) without losing Ethereum mining speed. A guide and download link can be found here.

Phoenix Miner is a relatively new Ethereum mining programme that is considered faster and more stable than the previous miner. The latest version supports dual mining, making it possible to mine Ethereum and Ubiq (UBQ) simultaneously. Click here to find the guide and download link. 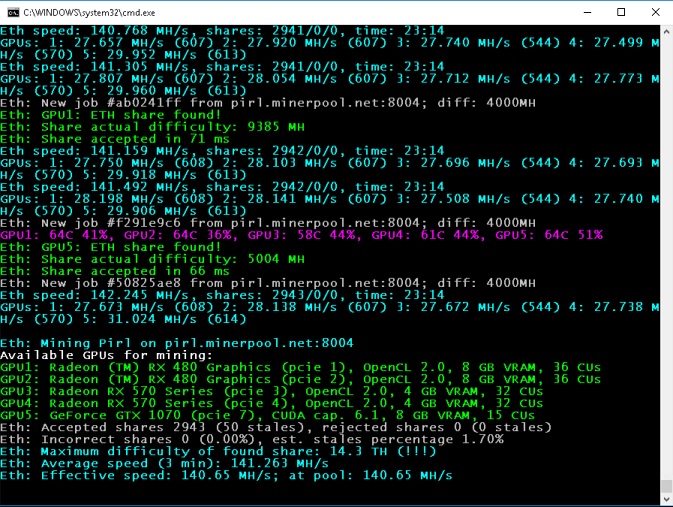 How to make money with Ethereum mining

Currently, Ethereum mining may not be very profitable. However, cryptocurrency prices are subject to significant fluctuations, which means it can be a good investment and a decent way of generating passive income.

But miners always try to use various tricks to lower mining costs. For example, they may look for cheaper electricity or even use the excess heat from mining equipment to heat their homes.

How to mine Ethereum faster

Faster Ethereum mining is achieved first and foremost by increasing the hashrate. The basic way to increase the hashrate is to purchase additional mining hardware. As previously mentioned, not all mining programmes are the same. Some of them, like Phoenix Miner, are faster and more efficient. But there are also ASICs (Application Specific Integrated Circuits) created for Ethash mining, which are far more efficient at Ethereum mining than GPUs. However, they are expensive and may become useless after the planned switch to Proof of Stake algorithm. That said, purchasing them is quite risky. 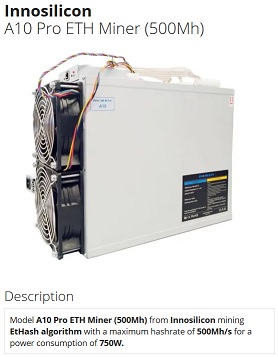 How to sell mined Ethereum

Another way to do it is to use an online exchange service or sell it directly to another person. In either case, be aware of exchange and withdrawal fees and the risk of fraud if you sell directly.

26 Jun, 2020
These days, there are many investment opportunities: commodities, stocks, options, and, of course, cryptocurrency markets. If you're looking to choose a cryptocurrency to invest in, you're in the right place!
Next article