Blockchain technologies are infiltrating numerous spheres of human activity, and many people probably have a question: can blockchain technology be used in sports? Yes, it can. In this article, we'll tell you about Chiliz, a blockchain project focused on the sports and esports sector. We'll explore this project's origins and features, conduct technical analysis and learn Chiliz token price predictions.

What is Chiliz (CHZ)?

Chiliz is a blockchain project that combines the Socios platform and the Chiliz cryptocurrency (CHZ). The project aims to strengthen and monetise the bond between fans and their favourite teams and sports clubs. 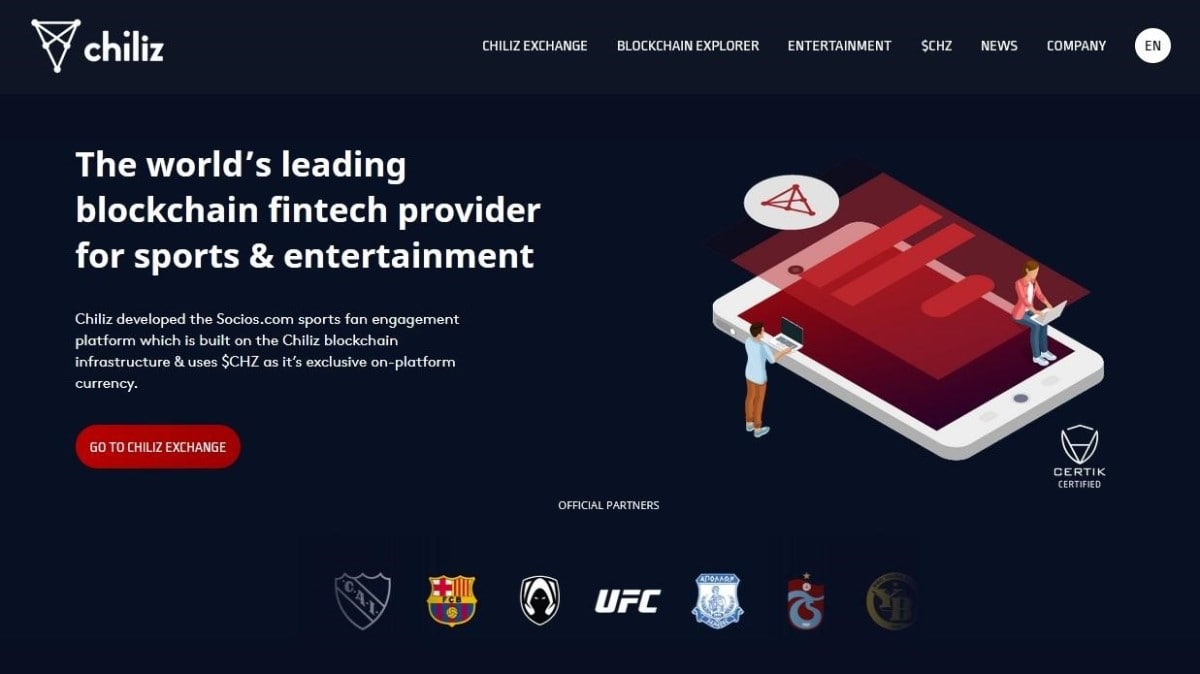 Traders glorify the project's teams when it goes up and despise them when it goes down. Yet the 'project' is the same, from one day to another. There is no change. Only emotions. CHZ & Fan Tokens will go up and down, all the time, but we will continue to build ... all the time. — Alexandre Dreyfus, Founder and CEO of Chiliz

The history of Chiliz

Chiliz was founded in 2012 by French entrepreneur Alexandre Dreyfus. In 2016, he had an idea to use blockchain technology to improve the interaction between sports fans and teams.

The Socios platform launched in 2019. In November 2019, the platform had its first partner, Juventus Football Club, issuing the JUV Fan Token.

Chiliz currently has over 80 employees. The company is headquartered in Malta with an office in Lyon, France.

Chiliz (CHZ) tokens are the internal cryptocurrency of the Socios.com platform. With the platform's help, sports teams and clubs can issue Fan Tokens and sell them. Fans can connect to the platform and purchase CHZ tokens to exchange them for the Fan Tokens.

Fan Tokens provide voting rights for their owners, unlock VIP rewards, and access to exclusive promotions, team merch, events and communities. Users don't need to spend Fan Tokens to participate in the decision-making process. To vote in a poll, you just need to be a Fan Token holder. 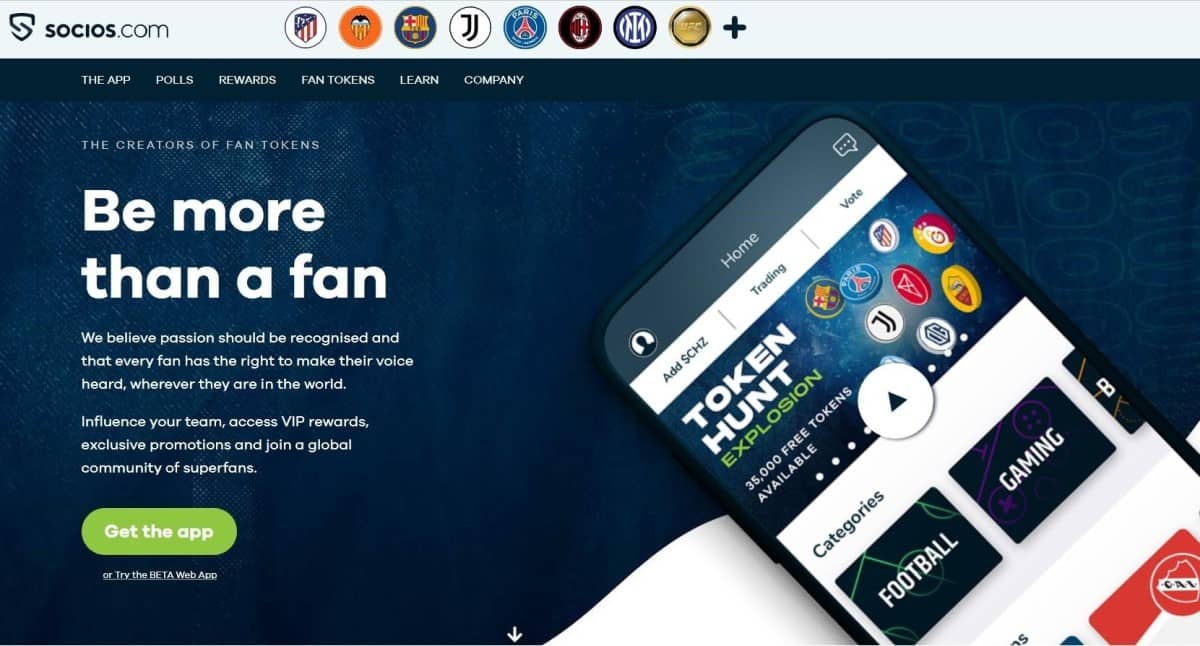 Examples of decisions made when voting with Fan Tokens:

Chiliz tokens are also used for trading on the Chiliz Exchange, a platform for buying and selling Fan Tokens. 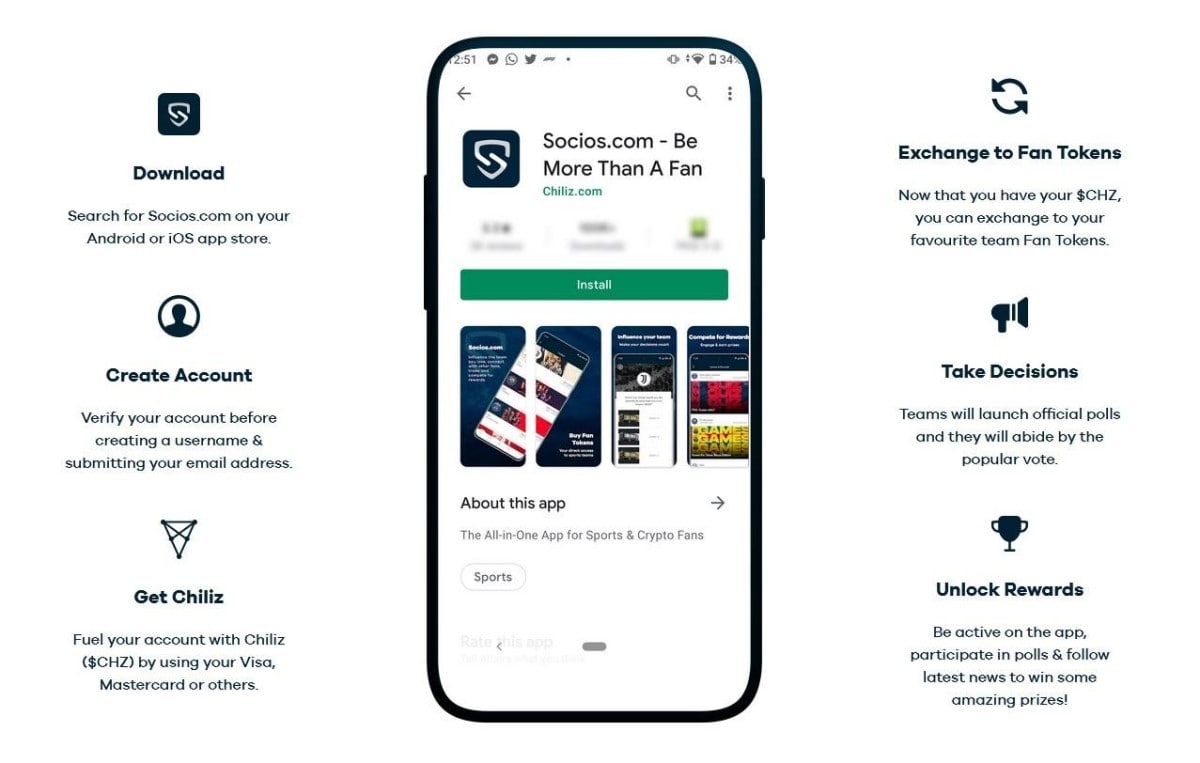 CHZ is an ERC-20 token, but it's also BEP-2 Binance Chain compliant. The Chiliz blockchain uses the Proof-of-Authority consensus algorithm.

At the time of writing, the CHZ token was ranked 38th among cryptocurrencies by market capitalisation at $1,118,500,23.

Crypto exchanges started listing CHZ in July 2019. Shortly after the CHZ token entered the crypto market, its price dropped and reached an all-time low on 26 September. The price went up shortly and reached a local maximum of $0.0197 on 4 November 2019. The subsequent decline smoothly turned into a sideways movement, which continued until 2 February 2020. Then, the token price grew rapidly but failed to break through the resistance level at the previous local maximum. The subsequent correction turned into a collapse on 13 March when the price almost reached its all-time low.

The recovery of the crypto market also affected Chiliz. On 14 August 2020, the price broke through the resistance level that it couldn't in March. However, buyers didn't manage to consolidate their success, and after a few days, a correction began. On 28 October 2020, sellers managed to break through the strong support level of $0.01.

On 6 November, the price broke through the $0.01 level again, this time upwards. This was followed by an exponential rise in the price, which peaked on 13 March 2021. After a major correction, the price spiked again in mid-April, but it didn't manage to reach the all-time high. An even deeper correction turned into a summer stagnation. In August, the price rose again, and after a correction in September and sideways movement in October, it rose again on 30 October.

The token didn't fare so well in 2022, as it fell through several support levels to create a yearly low at $0.812. While it may have recovered some, it wasn't enough to take it back to the higher prices it saw in 2021.

With an all-time high of $0.951, CHZ seems to be performing much better than a lot of the big dogs of cryptocurrency. On the daily chart, a flag seems to be forming as its price has been trading in a descending channel right from the all-time high. Flags are usually bullish signals and may indicate that an asset can run higher after it breaks out. But we won't get ahead of ourselves; many flag patterns have failed in the past. The cryptomarket is heavily bearish at the moment, with BTC crashing down to $16k in recent weeks. Plus, CHZ recently hit the channel's resistance, and if the trend continues, its price will travel lower until it nears $0.045. If this happens, CHZ will have set a new yearly low, which does not bode well for bulls hoping to reclaim the all-time high before the end of 2022.

In the event of an 'altcoin season' at the end of the year, Chiliz has a good chance of exceeding its current all-time high.

TradingBeasts believe that the token price will slowly rise and will average around $0.23 by December 2022. After that, the growth will be steady for the coming years, with some small corrections in between. By 2025, TradingBeasts believes CHZ will trade as high as $0.45.

WalletInvestor is quite bearish about CHZ. According to their calculations, the token price will fall to $0.0748 in one year. That's a nearly 60% loss if one gets in now. That wouldn't be the best mid-term investment.

Long Forecast predicts that CHZ is not a good investment option for the coming years. Their prediction is so negative that they have suggested the token will fall below $0.07 by the end of 2023. It gets slightly better after that, but not by any significant margin: they predict that CHZ will stabilise between $0.08 and $ 0.11 in 2026.

DigitalCoinPrice predicts slow but stable growth for the Chiliz coin. According to their estimates, the token will be worth $0.47 in a year, $0.82 in 3 years and $0.10 in 5 years.

PickACrypto avoids giving exact numbers in its predictions. According to their estimates, the token price will visit the range of $0.30-$1.00 in 2022-2025.

Gov Capital forecasts an increase in the token price, but their prediction is much more optimistic than that of others. They believe the price will rise and will be $5.852 in 5 years.

The Chiliz project looks promising. The company has a clear vision and business strategy. Chiliz has established partnerships with numerous renowned sports and esports teams and organisations in its relatively short history. It's also worth noting that for Chiliz, cryptocurrency isn't a goal but only a means of achieving goals that lie outside the blockchain industry. Due to its focus on the sports industry, the project can attract new users and active sports fans not previously interested in cryptocurrencies.

How high can Chiliz go?

With further development of the project and favourable conditions in the crypto market, the price of the CHZ token may exceed $1.50.

The crypto market is currently in a bearish trend, with both mainstream coins and altcoins experiencing the effects of selling pressure. CHZ is no exception.