The rapid development of the blockchain industry has led to the emergence of numerous blockchain projects. This gave rise to a new, previously non-existent problem: communication between different blockchains. Most projects exist independently, with separate blockchains that aren't connected in any way. That makes information transfer from one blockchain to another difficult. Today, we're going to study Polkadot, a project created precisely to solve this problem. In this article, we'll explore what Polkadot is, conduct a technical analysis of the project's token and try to predict Polkadot's future.

What is Polkadot (DOT)?

In simple terms, Polkadot is a project on its own blockchain that allows any other blockchain to be 'attached' to it using unique technological solutions. This allows data to be transferred between different blockchains and tokens.

The origins of Polkadot

Polkadot is the flagship project of the Swiss not-for-profit organisation Web3 Foundation, which was founded to create Web 3.0, a convenient decentralised Internet where users will control their data. The inventor of the concept of Polkadot is the president of the Web3 Foundation, Dr Gavin Wood, one of the most well-known individuals in the blockchain industry. He was a co-founder of Ethereum and one of the developers of the Solidity programming language for smart contracts.

In the future, trusting an institution with our interests will be as archaic a concept as a reckoning on an abacus today.— Dr Gavin Wood

The Polkadot project was launched through an ICO held in 2017, which raised $145 million. Unfortunately, the wallet where the funds were collected was hacked, and $90 million was stolen. Despite this, the developers didn't abandon their project. Instead, it was implemented at the expense of the remaining funds and additional funding.

When the project started, 10 million DOT were issued, but after a redenomination in August 2020 to make calculations easier, the number of coins increased to 1 billion. To date, the developers have managed to accomplish the best part of their plans, though the platform remains under development.

Polkadot's architecture is quite complex. The key feature of the Polkadot project is that the network is multi-chain and combines many blockchains. This allows the system to simultaneously process a massive number of transactions, making it very scalable. Furthermore, any blockchain can be connected to this ecosystem through a special technology that was developed to combine various blockchains with the main Polkadot blockchain.

If significant changes need to be made to the system or an error eliminated, a fork isn't required as it is with other cryptocurrencies. At the same time, the system has a high level of security thanks to a network of participants with various functions. 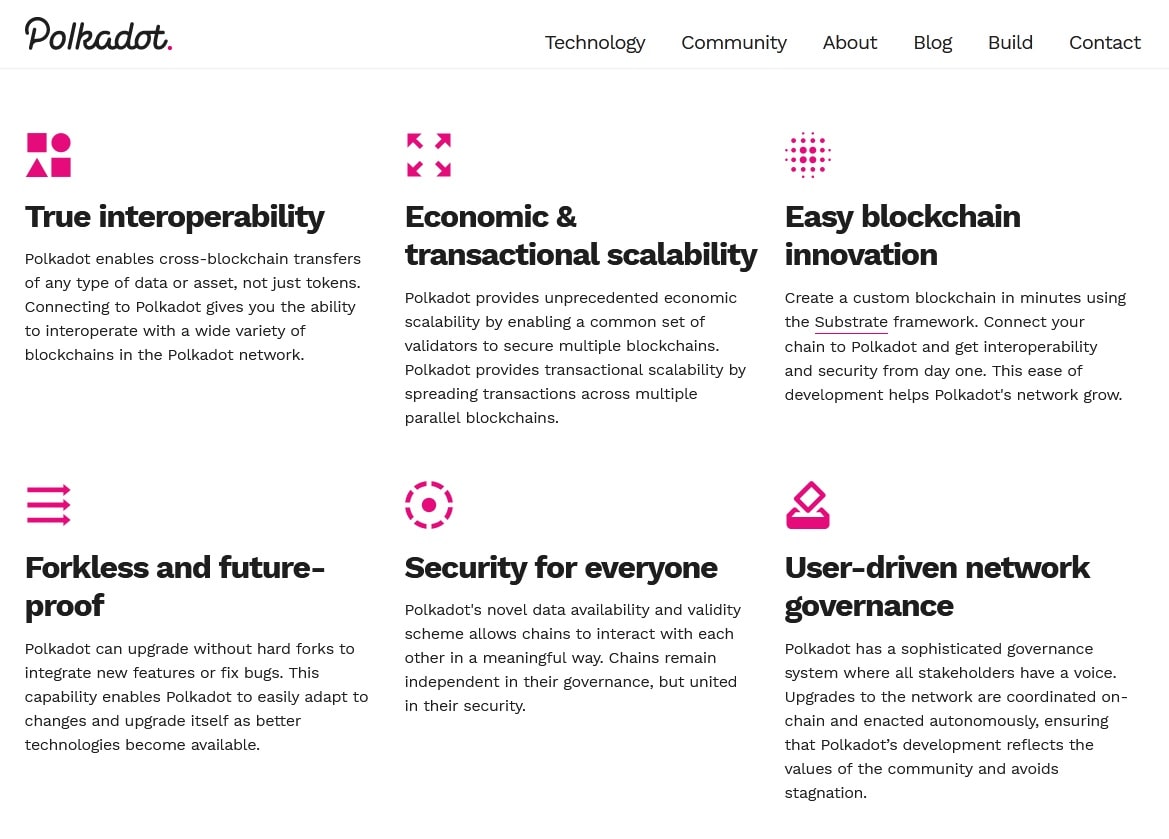 Furthermore, the system has several roles that network participants perform:

The NPoS (Nominated Proof of Stake) protocol is used to ensure maximum network security. Nominators and validators pay the amount required by the protocol in DOT, which gives them access to perform their functions. At the same time, they receive remuneration for their work and are incentivised to do it well.

The DOT token, in turn, performs the following functions in the project ecosystem: 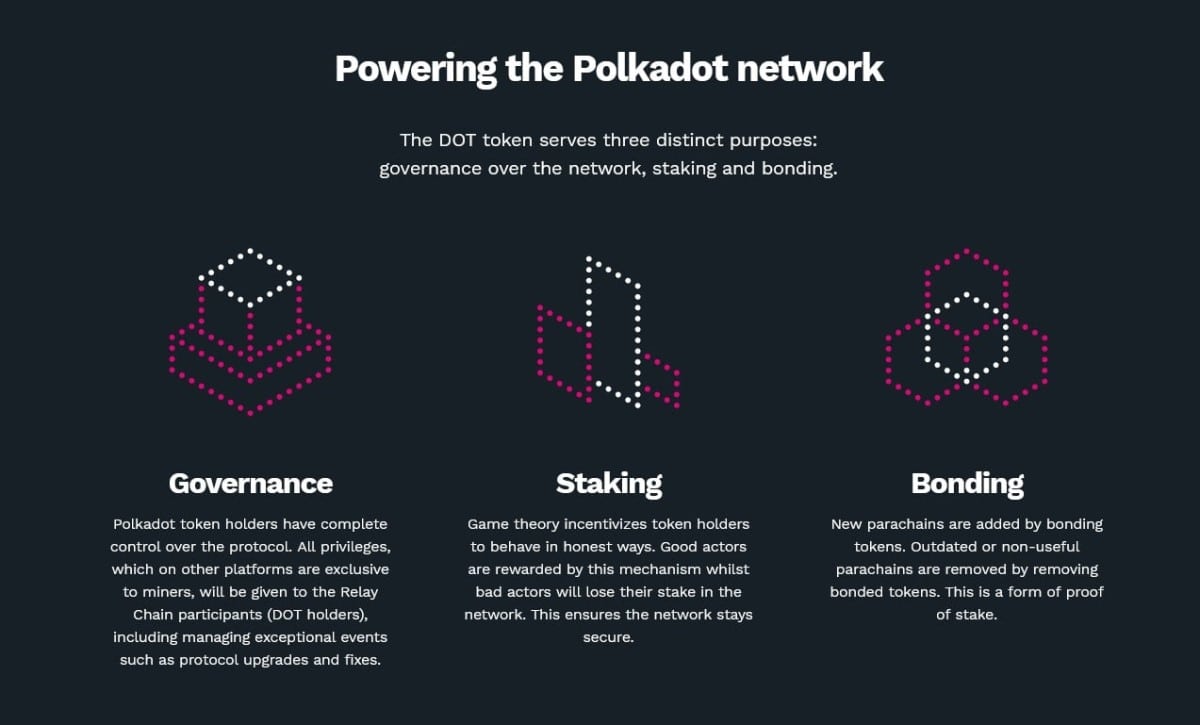 At the time of writing, the DOT token ranked 12th among cryptocurrencies by market capitalisation at $6,418,043,156

During its ICO, the DOT token had a price of about $30. However, after being redenominated in August 2020, the price collapsed, as was expected. Shortly after this event, the token was listed on major crypto exchanges.

DOT was listed on crypto exchanges in August 2020 and was not traded before that date.

Like most cryptocurrencies in 2021, Polkadot began the year in an uptrend that lasted five months. It set a new all-time high along the way at $49.78 before falling sharply by over 70% of the yearly range. After some price consolidation lasting from May to June, DOT finally started recovering, and by November, it had set a new all-time high at $55.

The first half of 2022 was not good for the crypto market, and DOT was no exception. It went from having a market capitalisation of over $16 billion in February to barely a quarter of that in July 2022. The coin's value dipped even more than its market cap, falling from over $23 to its current price of around $6.50 as of 12 July 2022.

On the chart, DOT broke through several strong support zones and is currently about to break through another at around $6.00. The 100 and 200 Exponential Moving Averages are all gapping comfortably above the price, acting as sure dynamic resistance if the price tries to reverse higher. There are fears that DOT is on its way to a new all-time low if the trend continues. It is currently trading 75% away from its current all-time low at $2.69.

As usual, we've compiled for you DOT price forecasts made by renowned cryptocurrency experts.

According to TradingBeast's forecast, Polkadot's price will range between $6.37 to $8.90 in the coming months. They aren't too optimistic with their price prediction for 2023 either, as they estimate that DOT's price may slide further down.

WalletInvestor disagrees with Trading Beasts' forecast and believes that the price of Polkadot will decline sharply. Their prediction suggests that DOT will lose almost 90% of its value within one year, falling from its current price of $6.50 on 12 July 2022 to as low as $0.65.

LongForecast is also bearish with its DOT price forecast. They believe that Polkadot's price will close the year at $3.27, then fall to $1.00 in 2023 before recovering slightly to stabilise around $3.00 in 2026.

Polkadot is a very ambitious project aimed at transforming the very structure of the global network. Many experts consider it to be a revolutionary solution that could completely change the blockchain industry. Moreover, the project has several advantages that increase its attractiveness for investors:

At the same time, the project does have one or two disadvantages. One drawback is the project's complexity, which can be an obstacle for developers who want to connect their blockchains to the project.

Will Polkadot go up?

How high can DOT go?

If the crypto market sees a new bull run, the DOT token's price is very likely to reach $70 and possibly even exceed its all-time high.

DOT is currently trading downwards in a wedge, but in the last couple of days, overall market sentiment has begun to shift, ever so slightly, to the upside. This may influence a bullish breakout in the coming days.