Bitcoin, the world's first cryptocurrency, has one important pre-programmed feature: The reward miners receive for including transactions into a block is not permanent. After every 210,000 blocks mined, the block reward is halved. This event occurs about once every 4 years and is called "halving".

Bitcoin, the world's first cryptocurrency, has one important pre-programmed feature: The reward miners receive for including transactions into a block is not permanent. After every 210,000 blocks mined, the block reward is halved. This event occurs about once every 4 years and is called "halving". If you want to know more about what halving and its purpose are, you can learn more about it in our other article on Bitcoin halving. In this article, we'll explore previous Bitcoin halving dates and their correlation with price history while also taking a quick look into the future of halvings and everything that may happen around this phenomenon.

When was the last Bitcoin halving?

According to the Bitcoin algorithm, there will be 33 halvings in total, after which the fixed part of the block reward will become less than 1 satoshi (the smallest unit of Bitcoin). Essentially, it will be equal to zero. Three halvings have already taken place. Let's take a closer look at the Bitcoin halving dates list.

The first block of Bitcoin blockchain, also known as "Genesis Block" or "Block 0", was mined on 3 January 2009 by the coin's enigmatic creator, known only as Satoshi Nakamoto. The creator of Bitcoin set the initial block reward at 50 BTC. Since Bitcoin had no monetary value in those days, there was no real incentive to participate in mining, and Satoshi was almost the only miner. However, as early as 17 March 2010, BitcoinMarket.com became the first-ever Bitcoin exchange. That caused a surge of interest in the new currency, and, in spring 2011, the price of Bitcoin surpassed $1.

Although 50% of available Bitcoins were mined within that rather short period before the first halving and the supply of Bitcoin grew at a fairly rapid pace, Bitcoin's price at that stage increased from $0 to $12.

The first halving took place on 28 November 2012. At first, the halving had no noticeable effect on Bitcoin's price. However, at the beginning of 2013, the coin's value began to steadily grow, and, in April, it gave way to a correction and continued again in autumn 2013, ending above $1,100. This was followed by a prolonged fall in prices, which went down to $152 on 14 January 2015. Finally, in October 2015, 9 months before the next halving, steady growth began again. 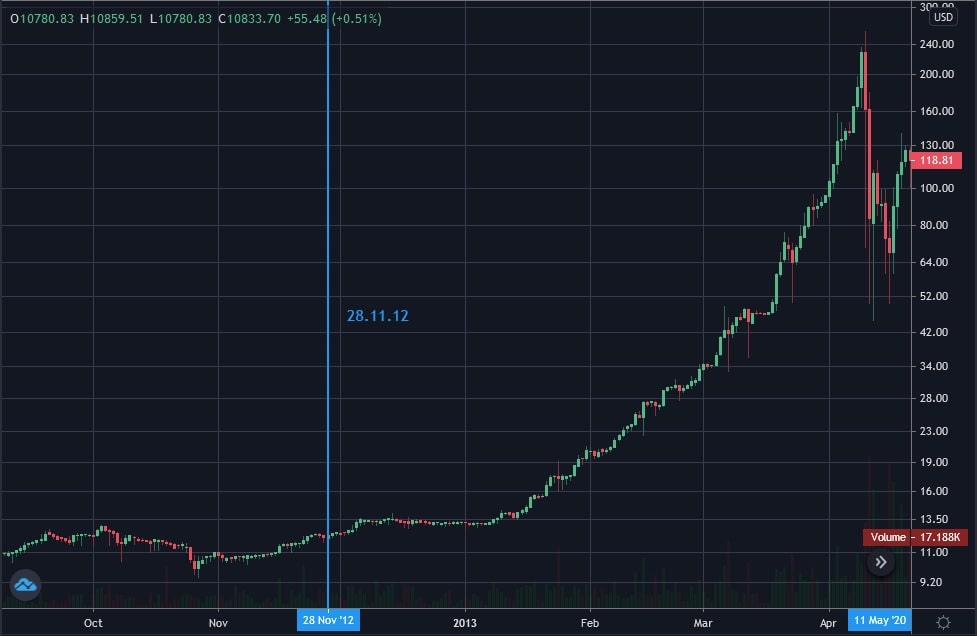 The second halving took place on 9 July 2016. That date was highly anticipated by the crypto community. These expectations, coupled with a sharp rise in Bitcoin's renown and acceptance, led to a noticeable price increase that began at the end of May, a month and a half before the halving. However, a correction took place in mid-June, and, soon after the halving itself, the price fell again with its local minimum reaching May levels.

As it later turned out, that was only a short-term correction. The bullish trend soon continued and developed into exponential growth. This growth peaked on 17 December 2017, when the price reached its all-time high of $19,700. After that, a long bearish trend set in.

There were several reasons for this spike in price; it's impossible to say what part halving played. In 2017, the popularity and acceptance of Bitcoin and other cryptocurrencies grew rapidly, attracting a large number of new participants to the crypto market. That, in turn, led to the emergence of an 'ICO bubble', which further increased demand for Bitcoin since many ICOs accepted it. 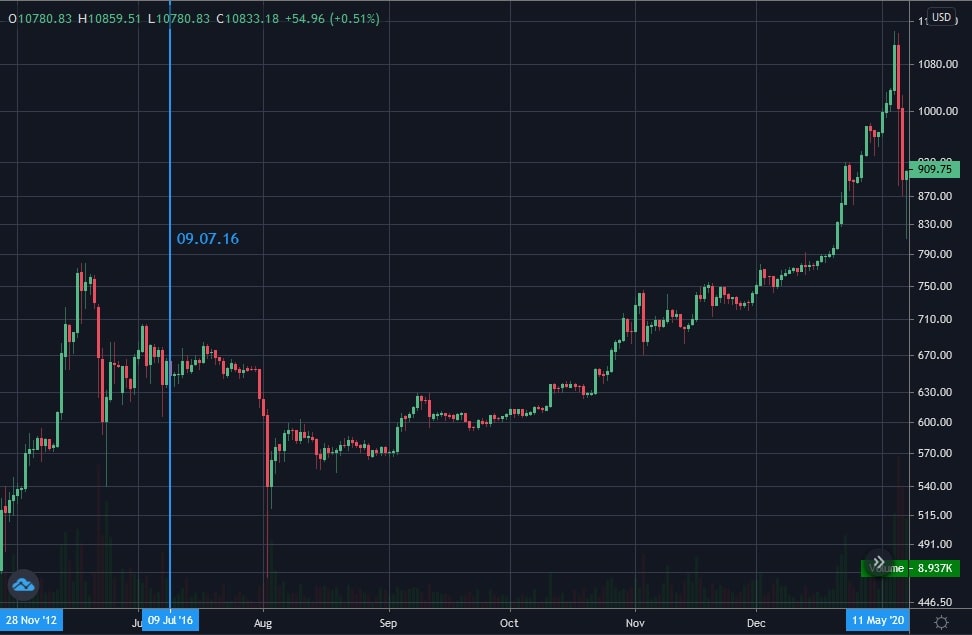 There were no halvings during these dates.

The third halving, which took place on 11 May 2020, as well as the previous Bitcoin halving, did not cause an immediate price increase. It's true that growth began on earlier halving dates at the beginning of the year, but the coronavirus crisis that started in March caused Bitcoin's price to collapse. This makes it even more difficult to assess how much halving is already factored into the price. At the same time, it should be taken into account that the current amount of Bitcoin being mined is quite small compared to the total amount of Bitcoin traded, and it is unlikely that a relatively small drop in supply can cause a significant price increase. Thus, a possible further increase in the price of Bitcoin will be much more influenced by a growth in demand than a reduction in supply. 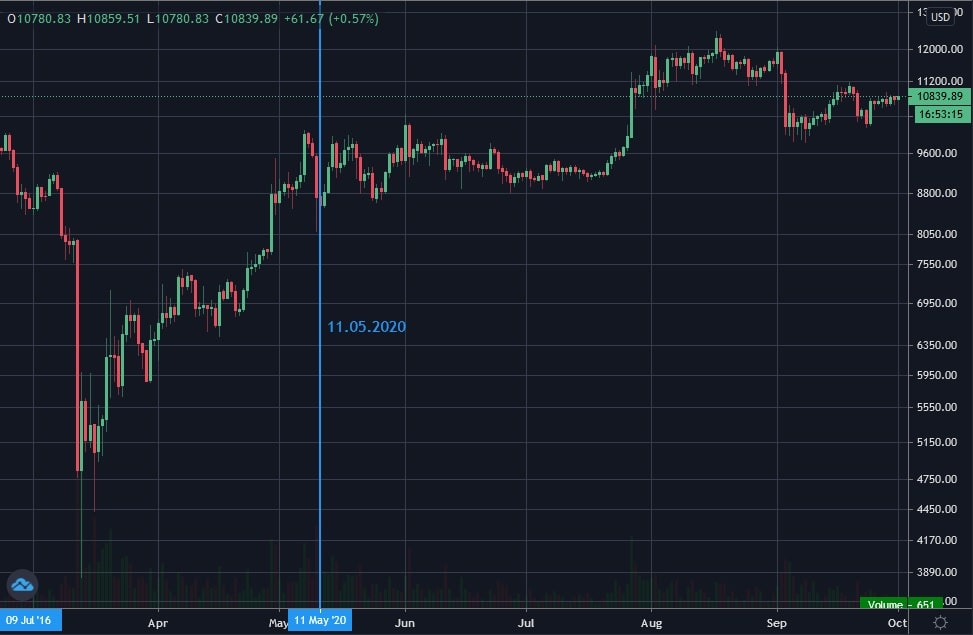 The next Bitcoin halving

Bitcoin halvings will repeat approximately every 4 years until the block reward becomes equal to zero. After that, the only reward for miners will be the commissions for transactions included in the block. Although this can have severe negative consequences for the Bitcoin network, its participants have every chance to find a solution to this problem.

Bitcoin halving: what, when, and how can the price be affected?

29 Sep, 2020
There's an event in the world of cryptocurrencies that happens every few years and is of great importance for the entire crypto industry. This event doesn't come unexpected but has severe and lasting consequences nonetheless.
Next article