The Ethereum blockchain was launched in 2015. Since then, its popularity has grown considerably, which is increasing the load on the network and, as a consequence, fees. Ethereum's developers are working on a solution to its scalability problem, but so far, they haven't been able to solve it. In this situation, third-party developers are bringing their own projects to the table. One of them is Loopring. In this article, we'll tell you about the Loopring protocol and its native token, LRC, and examine the token's price predictions.

What is Loopring (LRC)?

Loopring is an Ethereum scaling solution that is a layer 2 Zero Knowledge Rollup (zkRollup) protocol on the Ethereum blockchain. It is an application-specific exchange and payment protocol that serves as a low-fee, high-speed platform for payments, providing liquidity, trading and storing tokens on the Ethereum network. 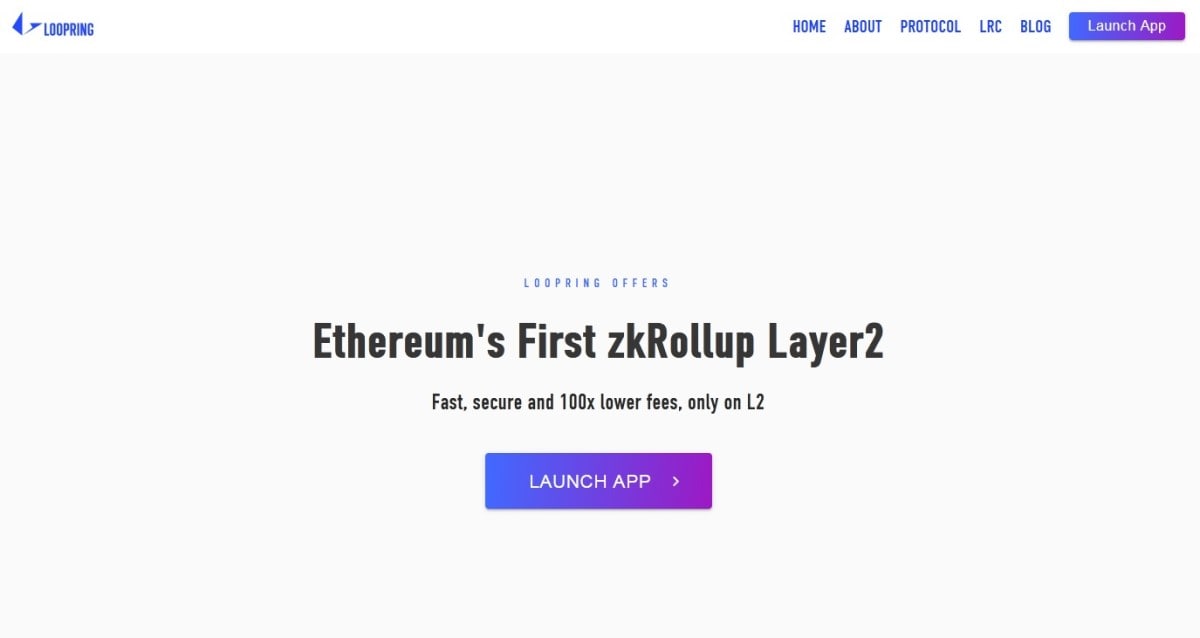 There are two things we're really focusing on in our protocol. The first one is throughput. The second one is the cost. - Daniel Wang, Founder and former CEO of Loopring Foundation.

The history of Loopring

The Loopring Foundation was founded by Chinese software engineer Daniel Wang, who holds a bachelor's degree in computer science from the China University of Science and Technology and a master's degree in the same field from Arizona State University.

A successful ICO was held in August 2017, but due to regulations in China introduced shortly thereafter, the developers were forced to refund most of the funds raised. Despite this, the development team continued to work on the project, and in December 2019, the Loopring protocol was deployed on the Ethereum network.

On 3 February 2022, Daniel Wang stepped down as CEO of Loopring and was replaced by former CTO Steve Guo.

The Loopring protocol is built using zkRollup. Rollups are a scalability solution for Ethereum that executes transactions in an external blockchain (layer 2), outside the core Ethereum network (layer 1), but the data or results of those transactions are placed on layer 1 in a dedicated smart contract. In this way, low gas fees and almost instantaneous transactions can be achieved. Even if the layer 2 network ceases to be fully operational, we can still get our funds back to layer 1, as the Ethereum smart contract will continue to work.

The protocol is done automatically. Tokens are exchanged using smart contracts. Orders are split into 2-16 parts, and the optimal time and market for their execution are selected. A ring order matching system is used to ensure high liquidity and find the best price. A group of 2-16 orders is formed, and tokens are transferred within this group. The tokens don't leave the owner's wallet until the transaction is completed. Transactions are processed by the network nodes themselves. There is no single supervisory authority.

The LRC token is used to pay Loopring exchange fees. In addition, the token is the core of the Loopring DAO and is used as a governance token.

LRC entered the market in September 2017. Soon after, its price began to rise and reached a local high of $2.24 on 10 January 2018. After that, the token's price, like the rest of the crypto market, began to decline as a global bearish trend took hold.

The decline culminated on 18 December 2019, when the price reached its all-time low. This was followed by a rise, and on 14 February 2021, the price reached a local high of $0.824. This was followed by a correction, which ended at the end of July 2021. At the end of October 2021, the token price began to rise sharply and reached its all-time high on 10 November 2021. Shortly afterwards, the price started falling again, and a new global bearish trend began, which is still going on.

On 4 November, the price broke the global down-trend line and even briefly crossed the upper boundary of the descending channel. However, the price then fell sharply and rebounded from the channel's lower boundary.

Trading volumes have now declined, and the price is moving in a relatively narrow range. The moving averages indicate a state of uncertainty. The MACD indicates weak bullish sentiment. The nearest support levels are $0.183 and $0.134. The nearest resistance levels are $0.32, $0.34 and $0.645.

LRC, like most altcoins, is dependent on the general health of the crypto market, which is moving sideways after a decline in early November. If Bitcoin manages to break the bearish trend before the end of the year, LRC has a good chance to start rising, as well. However, so far, there are no strong signs pointing to such a development.

LRC is a fairly popular crypto, currently among the top 100 cryptocurrencies by market cap, which has attracted attention by forecasting services. We have compiled for you Loopring token price predictions made by some of the most popular ones.

Is Loopring coin a good investment?

The Loopring protocol aims to address one of the biggest challenges the Ethereum ecosystem is currently facing, scalability. While the Loopring protocol is application-specific and does not attempt to cover the entire scalability challenge, the niche chosen by its developers is quite ambitious. Loopring has a number of strengths that can make it very helpful in the mass implementation of decentralised finance (DeFi):

As for the LRC token, its issuance is limited. In addition, 10% of the fees go to the Loopring DAO, which can manage them, including burning them, thus reducing the supply of tokens.

One of the main risk factors for the future of the project and its token is high competition among projects that also offer options for scaling the Ethereum network, as well as projects that offer an alternative to Ethereum itself. Furthermore, it cannot be ruled out that the continued development of the Ethereum network will solve the scaling problem in other ways, thus making projects like Loopring redundant. However, the fact that Vitalik Buterin himself has stated that he believes zkRollup technology will become the dominant paradigm for Ethereum scaling contradicts this.

How high can the LRC coin go?

If the project team continues to develop the project, the LRC token is quite capable of repeating or even exceeding its all-time high during the next bull run.

In the short term, the LRC token shows weak bullish signals. However, the global bearish trend and the uncertainty in the crypto market make opening long positions risky at the moment.