Decentralised finance (DeFi) is a relatively new trend in the cryptocurrency industry that saw a rapid increase in consumer interest in 2019-2020. DeFi is services and applications developed using blockchain, cryptocurrencies and smart contracts. The DeFi ecosystem offers users the services typically provided by banks and other financial institutions. Put simply, it's a kind of alternative financial sector that is publicly available and not controlled by any authority. Moreover, any Internet user can easily access these services where intermediaries are now excluded. In this article, we'll explore one of the first DeFi projects, the Synthetix protocol, and present you with a price prediction for the project's native token.

The promise of fintech over the last ten years has run up against all of these impediments and barriers to entry, and Ethereum really removes those. — Kain Warwick, Founder of Synthetix

What is Synthetix (SNX)?

Synthetix is a decentralised blockchain protocol for creating and exchanging synthetic assets (synths) on the Ethereum network. Synths are ERC-20 tokens that represent the prices of external assets: fiat currencies, stocks, cryptocurrencies and more. Using synths makes it possible to benefit from trading marketable assets without actually owning them. In other words, they're a kind of derivative within a closed ecosystem built on the Ethereum network. Synths don't give their holder ownership of the underlying asset.

The origins of Synthetix

Synthetix was founded in September 2017 by Australian investor and entrepreneur Kain Warwick. Initially, the project was named Havven, but in 2018, it was rebranded to Synthetix.

The project's ICO held at the end of February 2018 raised $30 million.

In October 2020, the project was transitioned to a decentralised autonomous organisation governance structure.

Real-world asset prices are tracked through Chainlink (LINK) oracles. Chainlink provides the project with data on the prices of various assets: gold, stocks, cryptocurrencies, indices, etc. In addition to synths that directly follow the price of the underlying asset, there are also 'mirror' tokens whose price moves opposite to the movement of the underlying asset price. 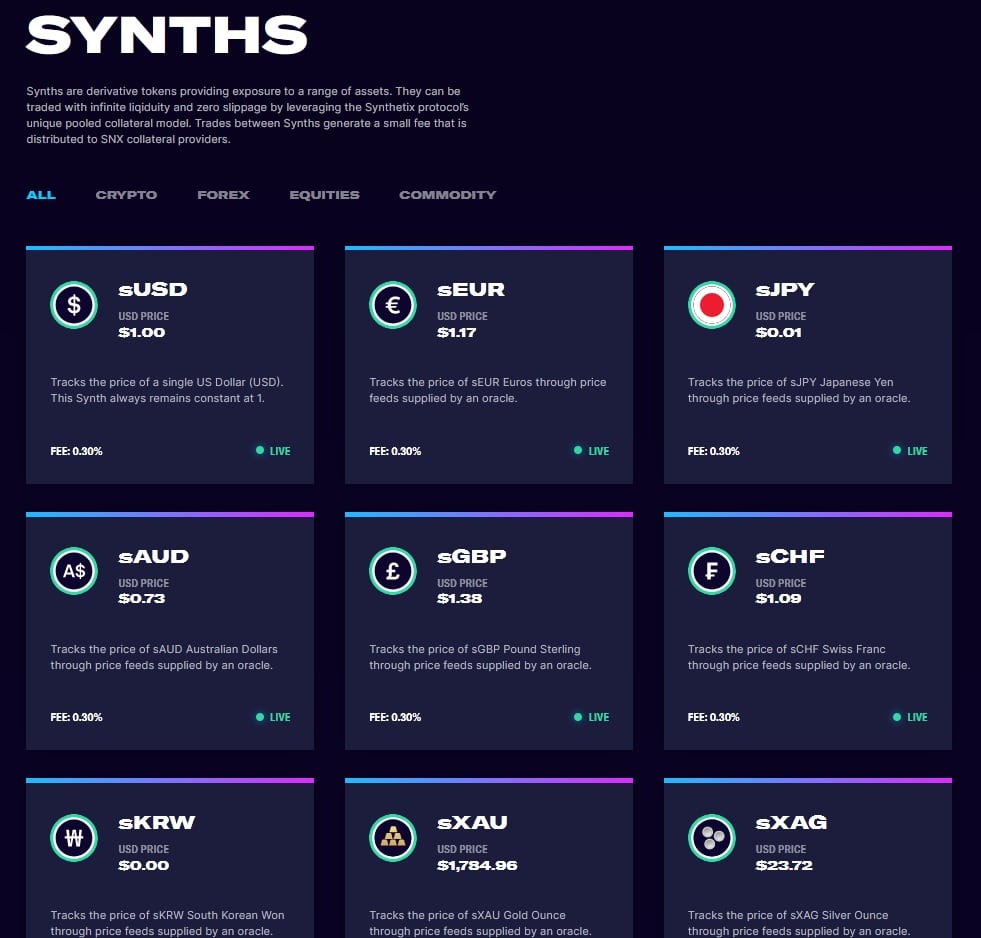 There are quite a few options for using synths:

By incentivising people to use the platform, we grew our user-base quickly, and those users made profits from providing us liquidity for others to trade. — Kain Warwick

Liquidity on the Synthetix exchange is provided by users staking SNX tokens. Staking is rewarded with commission fees from exchange transactions. A commission of 0.3% is deducted from any transaction and goes to the commission pool. Participants receive a weekly reward, which is proportional to their share of participation.

At the time of writing, the SNX token ranked 113th among cryptocurrencies by market capitalisation at $653,560,278.

When it was listed on exchanges, the token traded at a price closer to its price at the time of the ICO. Shortly thereafter, its price began to rise and reached a local high of $0.78 on 22 May 2018. After that, the trend changed to bearish. Buyers attempted to reverse the trend on 11 October 2018 but only had a short-term effect, and the bearish trend continued until the end of the year.

On 5 January 2019, the token price reached its all-time low. After that, the price moved sideways for some time. Finally, at the end of March, a bullish trend began. It continued until 28 November 2019, when the price reached a new high of $1.566. The price then moved sideways in a narrow range for the rest of the year.

On 1 January 2020, the SNX price broke through the support level of $1.20 and continued to move in the range of $0.77-$1.20. On 5 March, sellers managed to break through the support level of $0.77. Despite the buyers' attempt to return the price to the range, it collapsed. During a panic sell-off on the crypto market on 13 March, it reached a local low of $0.33. SNX was included in the cryptocurrency market's ensuing recovery, and the bullish trend that began immediately after the collapse persisted for the rest of the year.

SNX had a great start in 2021. It opened the year at $7.25 and, in just five days into 2021, the price took out the all-time high set in December 2020. By 14 February, the price rose by over 300% to set a new all-time high record at $28. After a downward consolidation that lasted more than three months, SNX finally fell significantly in price to the support at $5.50. At that point, bulls stepped in and tried to ramp the price higher. They managed to get the price as high as 180% from previous support before finally losing steam and giving way to further bearish momentum. SNX ended the year even lower than it started.

Ever since SNX set a new all-time high back in February 2021, it has consistently trended downwards, losing most of the gains it made. The market structure on all timeframes is heavily bearish, with few signs of recovery.

Since rebounding from the support at $3.54, the price has steadily traded higher on lower timeframes like H4, and for the first time since August 2021, SNX has found some level of support on the 200 EMA. If bulls can keep the price above the 200 EMA up to the next resistance at $7, there's a chance that other institutional investors will step in to drive the price higher. Also, considering the 52-week range, the price is currently trading at a deep discount, which is a great incentive for long-term investors. On the downside, if the price trades below the support at $3.54, SNX may be on its way to a new all-time low.

Walletinvestor expects SNX's price to fall even further. According to their calculations, the token will be worth $0.71 in a year.

Longforecast believes that the token will rise eventually but not before declining for the better part of 2022. They predict that SNX will find resistance at around $7 before trading lower and closing the year at $4.41. It gets slightly better in 2023 and 2024 as they expect the price to trade as high as $11 and not trade any lower than $5.83.

PickACrypto's calculations also show that SNX's price will rise. Their models predict that the token's price will be between $25 and $45 between 2022 and 2025.

Synthetic assets are great for expanding the capabilities of DeFi, allowing users to trade all kinds of real-world assets without leaving the Ethereum network. Keep in mind, however, that owning synths doesn't mean that you own the underlying assets. Synths work only thanks to SNX stakers, who issue synthetic assets in order to generate income. Thus, the price of the SNX token will depend on how popular the Synthetix platform is.

The DeFi industry, of which the Synthetix platform is a part, is growing rapidly. However, it also faces risks from regulators who are increasingly discussing tighter regulation of the industry.

In addition, it should always be remembered that the price of any token is highly dependent on the fluctuations of the crypto market as a whole.

Will Synthetix go up?

How high can SNX go?

If the trend reverses to the upside and the crypto market in general gains momentum again, SNX may eventually trade as high as its current all-time high.

Currently, SNX is generally bearish. If it manages to break through the resistance level of $7, it may be an indication that the trend has shifted in favour of the bulls.