Ethereum merge - All you need to know

So, a rather significant event in the crypto world is expected soon. It has been talked about for a long time but has been continuously postponed for several years. Of course, we are talking about the Ethereum merge (or merger). Well, let's break down what the Ethereum merge is, when it'll happen, and what consequences to expect.

What is the Ethereum merge?

Decentralised blockchains require a consensus mechanism, i.e. a concept for validating transactions between participants. The most common algorithms right now are Proof-of-Work (PoW) and Proof-of-Stake (PoS). They're based on different approaches, but the core is the same: The blockchain is made operational by a distributed network of independent validators (called nodes) that input information into a single database of completed transactions.

Although PoW is the most time-tested consensus algorithm, it has some serious drawbacks and is now considered by many to be obsolete. The most significant advantages of PoS over PoW are:

The Ethereum merge is a major update to the Ethereum network that implements the network's transition from the PoW to PoS.

The merge began with the launch of a network called the Beacon Chain, which is separate from the Ethereum mainnet. It's where a dedicated smart contract for ETH staking was deployed. The upcoming update is essentially a merge of Beacon Chain and the current Ethereum mainnet.

When is the Ethereum merge?

The use of the PoS consensus algorithm on the Ethereum network has been planned from the outset, according to Vitalik Buterin, the creator of Ethereum. However, as this algorithm was relatively new and poorly tested, it was decided to initially use PoW and later switch to PoS.

The merge will consist of two phases. The first will be an update called Bellatrix on 6 September. If successful, the Paris update will be launched when the system reaches the required Terminal Total Difficulty (cumulative network complexity up to the requested block).

Achieving the necessary conditions to start the Paris upgrade depends on the network's hashing speed and could occur within a 10-day period, starting on 10 September. 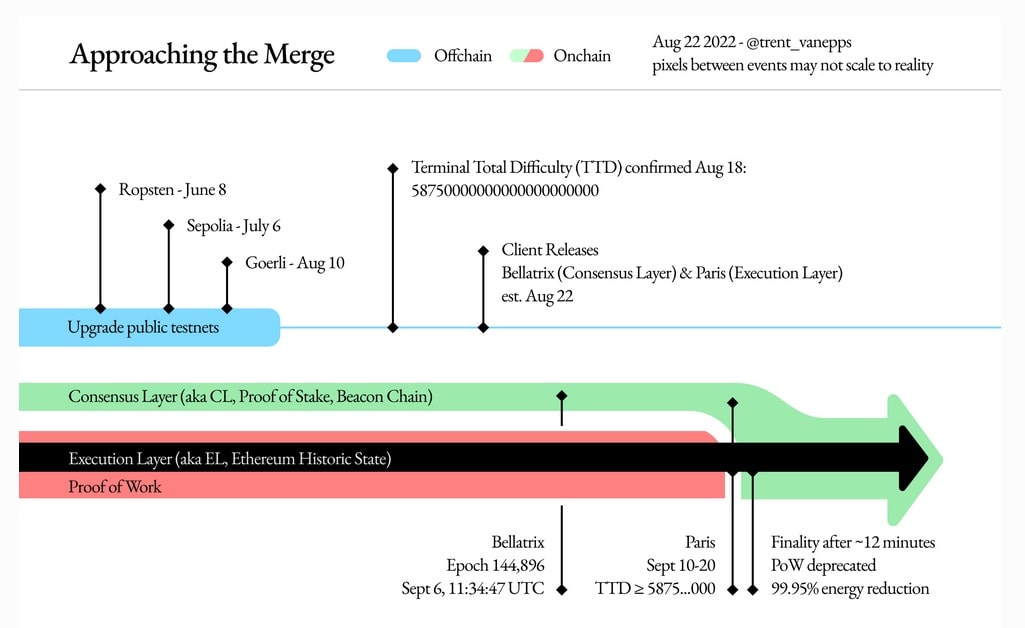 Benefits after the update

The transition to the PoS algorithm will have some positive consequences for the Ethereum network and its participants:

Drawbacks of the Ethereum merge

Despite the obvious advantages of switching to the PoS algorithm, it also has some disadvantages:

Ethereum price prediction after the merge

It's impossible to predict reliably how exactly ETH's price will change after the merger, as it's affected by many different factors. Many experts believe that the merger is already priced in. However, it must be taken into account that the issuance of new coins will be reduced with the transition to PoS. Moreover, stakers will be forced to lock their ETH to become validators on the network. This will be a factor pushing ETH's price up.

The impact of Ethereum merge on the cryptocurrency market

While it's extremely difficult to accurately predict the influence of the Ethereum merger on the crypto market as a whole, there's no doubt that such a large-scale event will have an impact.

In the short term, the Ethereum merger is unlikely to have a noticeable impact on Bitcoin. In the long term, however, Ethereum's subsequent increase in scalability and bandwidth could lead to an increase in its popularity, including as a means of payment. This, in turn, will cause Ethereum's dominance to increase at the expense of Bitcoin.

As a meme coin with a community of loyal supporters, Dogecoin is unlikely to be heavily influenced by the Ethereum merge. However, given that further upgrades to the Ethereum network will be aimed at increasing network bandwidth, ETH could win over some of those users who prefer DOGE because of fast and cheap transactions.

As a meme coin and a speculative asset with a lack of utility, Shiba Inu lives by its own laws. It's unlikely that the Ethereum merge will have a noticeable impact on it.

06 Oct, 2022
On the night of 1 October, the 'Ethereum killer' was faced with yet another crash and complete stop to the network. Since this is the eighth time in a year, users have lashed out at Solana's developers.