Although the first practical application of blockchain technology was the first cryptocurrency, Bitcoin, it now goes far beyond just cryptocurrencies. Increasingly more blockchain projects are platforms aimed at various goals, including global ones like transforming the Internet. In this article, we'll explore one of these projects — Ankr, its origins and goals, and a price prediction for its token.

What is Ankr (ANKR)?

Ankr is a platform designed to use idle computing resources in data centres and personal computers and combine them into a single computing network. It allows developers and enterprise customers to rapidly deploy blockchain nodes at a lower cost than centralised cloud providers offer. Public blockchains can quickly decentralise and secure their networks with the Ankr network. 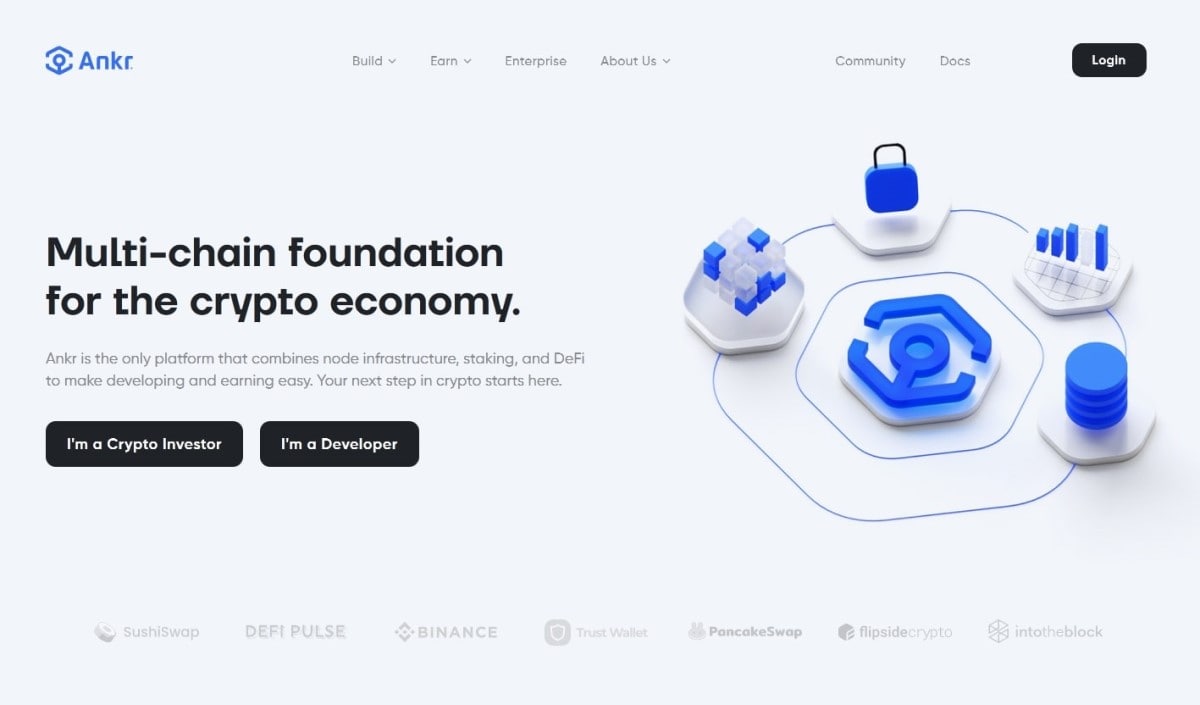 I feel blessed to have discovered crypto in its early days and have since then been working tirelessly to build products that can bridge everyday users to these rather complex technologies. — Chandler Song, Co-founder and CEO of Ankr

The origins of Ankr

Ankr was founded in 2017 at the University of California-Berkeley in the United States by Amazon Web Services engineer Chandler Song and Ryan Fang, an investment banker at Morgan Stanley. The developers held an ICO for the Ankr token 16-21 September 2018 and raised $14.5 million.

The Ankr platform positions itself as an ecosystem for Web 3.0 development, the next phase of the Internet's evolution based on distributed networks, decentralised applications and smart contracts.

ANKR is an ERC-20 native token of the Ankr platform on the Ethereum blockchain. It's used as a means of payment for using the platform's services.

At the time of writing, the ANKR token ranked 120th among cryptocurrencies by market capitalisation at $222,854,147.

ANKR was listed on cryptocurrency exchanges in March 2019 and was not traded before that date.

Soon after being listed on crypto exchanges, the token's price declined, reaching a local minimum of $0.006297 on 17 May 2019. Subsequently, the price increased to its peak of around $0.01365 on 23 July 2019. After that, it experienced a prolonged fall that began last year and persisted for most of it.

The token's price began to recover in late January 2020. That recovery was interrupted on 15 February 2020, after the price reached a local maximum of $0.0375. ANKR's subsequent correction ended in a sharp collapse, dropping down to its all-time low on the day of the crypto market's panic sell-off on 13 March 2020. After that, the trend finally changed to bullish and remained so for the rest of the year.

Coming from the year before, ANKR started 2021 on a positive note. In less than two months, ANKR's price blew past the all-time high set in 2020 to reach $0.042 before retracing a bit to find strong support around the previous all-time high at $0.018. A month after it rebounded from the support, ANKR had grown by over 1000% to create a new all-time high at $0.2252 (28/03/21). Like all things cryptocurrency, the pace couldn't be maintained, and the price eventually fell heavily. By July, it had lost around 80% of its previously accumulated gain and found support at $0.047. The technical support would later prove strong enough for bulls to take advantage of and fire up the price again but not strong enough to retake the current all-time high. By December 2021, ANKR had an average price of around $0.10.

From the chart directly below, it's easy to see that ANKR is currently on a bearish trend. Since the price peaked in November 2021, it has struggled to attain higher prices. The most positive growth happened when it bounced off the technical support at $0.057 in March 2022. It moved a little over 70%, but the price was soundly rejected at the $0.096 resistance. Nothing hindered the lower price movement, and it eventually broke through the support level at $0.057. Other significant price zones include the support at $0.018, the recently formed resistance at $0.057 and the dynamic support and resistance, i.e., EMAs.

We've compiled ANKR price predictions from several crypto experts for you, so let's take a look.

WalletInvestor predicts a poor investment run for ANKR. According to their estimates, the price will fall by over 90% in one year, trading at around $0.00212 in July 2023.

DigitalCoinPrice is even more optimistic in its estimates of ANKR prospects. They believe the price will reach $0.037 by the end of the year. They also predict a steady rise in ANKR's price in the coming years. According to their calculations, the token will be worth $0.048 in two years, $0.053 in four years and $0.10 in six years.

Undoubtedly, ANKR is a rather ambitious project that is being developed by a relatively small team. Its prospects will depend on whether the developers can turn these ambitions into reality.

Will ANKR go up?

Since the token's issuance is limited and users have to pay to use the platform with the platform's tokens, ANKR has a higher chance of increasing in price. However, at least one thing has to happen for the price to increase: the platform has to be accepted by users and become known across the crypto community. If that happens, ANKR's price will rise.
However, as with other cryptocurrencies, we mustn't forget that the crypto market's general state has a huge impact on nearly all crypto coins' prices.

How high can ANKR go?

It's difficult to state with any accuracy the height that ANKR may reach in the future, but if history is any indication, we could see the token keep rising.

At the moment, the coin's price is consolidating. Given the uncertainty surrounding it, it's worth waiting for a less ambiguous trading environment. It'll be a good sign if the price breaks through the resistance level around $0.08.