TRON (TRX) is a blockchain and a unique cryptocurrency that sees high demand among gamers and gamblers. Cryptocurrency experts all over the world predict it will have a great future. Investors are keen to know TRON (TRX) price predictions for this cryptocurrency, one of the largest and currently ranked 16th by market capitalisation. To get a better idea of the TRON coin price prediction for 2022-2030, let's take a look at the company and its founder.

The TRON Foundation is an organisation based in Singapore. Dubbing itself the "industrial force" of all Southeast Asia, the Foundation supports TRON's development team and participates in its open, honest, and transparent cryptocurrency network. Regulation and compliance are the core values of the team behind the TRON Foundation. The Foundation has been approved by the Singapore Registrar of Companies (the Accounting and Corporate Regulatory Authority under the Ministry of Finance).

The young leader of the company, Justin Sun, has achieved remarkable feats. First, he created the Peiwo application, which already has 10 million users. Sun made Peiwo the first streaming app to accept cryptocurrency payments. Now, the Peiwo app ranks among the leading members of the online audio content community.

Forbes listed Sun on Asia's 30 Under 30 Top Business Leaders list. He is also a protege of Jack Ma, founder of the Alibaba Group. Ma chose Sun to study at the prestigious Hupan University. Entry into this university is harder than getting into Princeton. 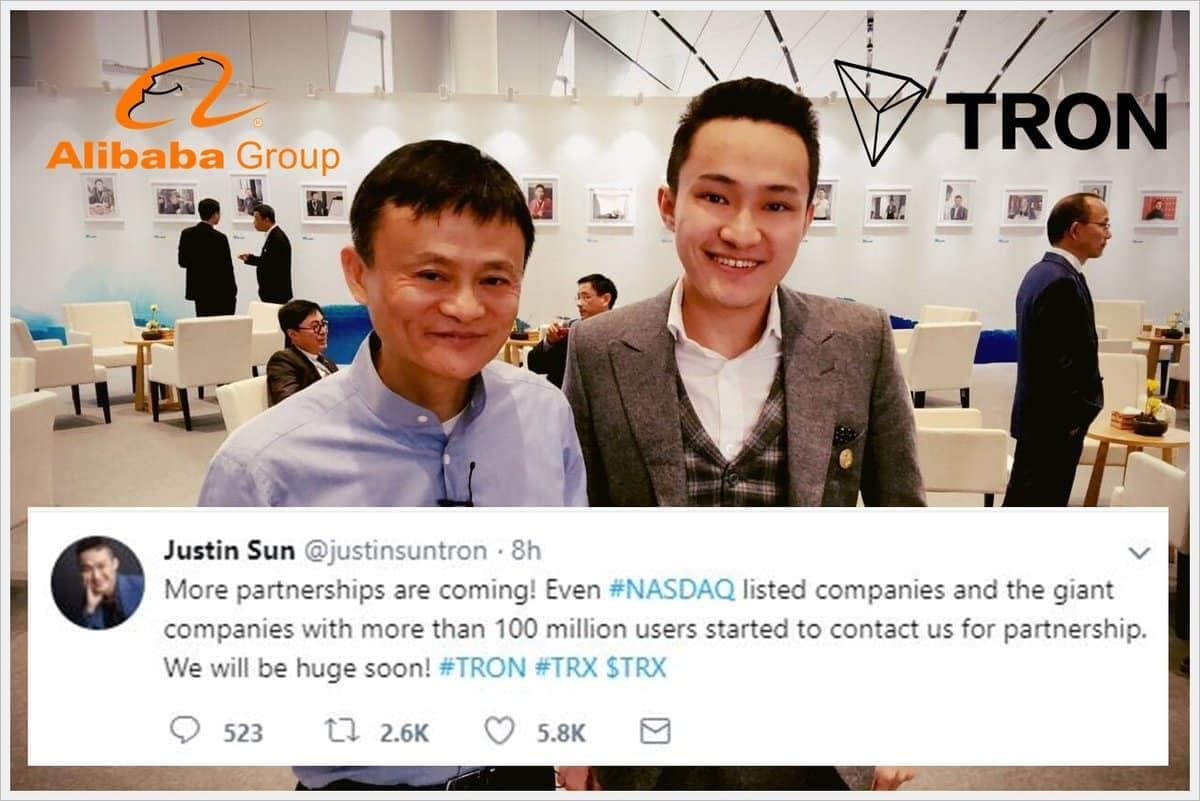 Moreover, Sun graduated from the University of Pennsylvania. Besides Jack Ma, Sun has surrounded himself with even more star mentors. Feng Lee (advisor at Ripple) and Tim Berners-Lee (inventor of the internet) are among them. Sun also worked for Ripple as chief representative and advisor.

The number of key influencers in the crypto industry who predict TRON (TRX) to grow is increasing. This extensive experience and support allow Sun to get the skills and knowledge needed to run his own cryptocurrency project.

TRON is a decentralised entertainment platform that uses blockchain and P2P technology. TRON (TRX) is a next-generation social media platform where users can create and share content with anyone around the world.

Tronix (TRX) is the primary cryptocurrency of the TRON blockchain. This currency helps manage transactions between entertainment content creators and purchasers. With the help of the TRON blockchain, people who actively use social media networks, online casinos, and other types of entertainment will benefit from the use of their content by others.

Content creators can benefit from TRON's cryptocurrency ecosystem, mainly receiving substantial compensation for their content when it gets shared with others.

This model is the opposite of how traditional social media platforms like Facebook and YouTube work. TRON monetises user information, while other platforms usually pursue their interests without taking users into account. When using TRON (TRX), no one controls creators' content. This enables content creators to make money through their creativity and hard work. TRON runs strong campaigns in mainstream media and social media networks. 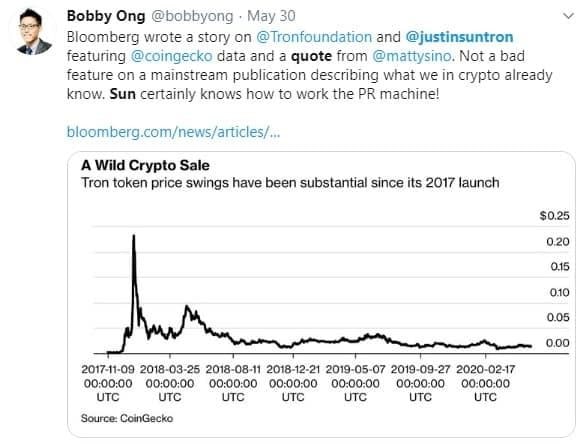 TRON is continuously looking for new partners and opportunities. Here is a list of some of their partnerships:

Those deals and partnerships have allowed TRON (TRX) to significantly expand its influence in the technological and crypto space.

TRON is working hard to compete with such cryptocurrencies as Stellar, XRP, Cardano, and Ethereum. Currently, TRON (TRX) is ranked 14th by market capitalisation at $5,605,469,818.

TRX statistics as of the time of writing:

The analysis and prediction of TRX's price should start with a historical data review. TRON is a fairly young cryptocurrency, created in late 2017, and the network was launched in mid-2018.

The dynamics of TRON's price:

Today, TRON trades at $0.09248 per TRX coin. The cryptocurrency has shown strong growth since reaching its low.

In the bearish trend that has gripped the crypto market since Q4 2021, Tron has also been having a hard time. While it's not the worst-performing cryptocurrency, it's also not the best-performing one. Ever since its last attempt to recover the high set in April 2021, the value of TRX has slowly but steadily declined.

As of the time of writing, 12 October, Tron has been consolidating between $0.09 and $0.05, forming a descending triangle in the process. According to the general price action principle, an impulse move may soon follow. The question is, in which direction? The market structure on all time frames is bearish, and the general sentiment on cryptocurrencies isn't particularly bullish either. Support levels are being shattered, and resistance levels are holding up more often than not. All things considered, it should not be a surprise if the price breaks below the triangle to the next support level at $0.02.

Early 2018 was a year of significant growth for all cryptocurrencies, and TRON (TRX) is no exception. TRON's price soared to a record high of $0.30. As the asset's price peaked, bears stepped in and pushed the price as low as $0.023. However, the Minenet launch helped TRX surpass $0.10. After that positive event, the rest of the year was bearish for TRON and other altcoins. In 2018, TRON's price fell as low as $0.011.

The performance of TRON's crypto price in the 2019 prediction is similar to that of 2018. As the coin performed well at the beginning of the year, its price increased and touched $0.045 on 26 June 2019. The rest of the year was bearish. TRX's price fell back to its low of $0.011 and remained near that level for the rest of the year.

Like other cryptocurrencies in 2020, Tron also had a good year. The price opened at $0.0132 and set a yearly low in the first quarter of the year. Tron continued trading higher until the end of the year, closing at over 250% from the low it set in March.

If 2020 was a good year for cryptocurrencies, 2021 should be considered a great year. It started the year in a consolidation that lasted until February. The price exploded upwards after that to set a yearly high at $0.1800, the highest high on the daily time frame since Tron set its all-time high four years ago. The rest of 2021 wasn't as bullish but maintained a steady price above $0.081.

The TRX coin is very dependent on the decentralised applications (dApps) market. All price predictions are ultimately based on two other expectations: future financial performance for this market and the likelihood of success for TRON's competitors. 2019 was a dark year for the financial market globally, but TRON didn't see any interesting price swings except for a few attempts to raid old lows and smaller highs.

According to the price prediction from TradingBeasts, TRX's price is expected to grow slowly but steadily. The current TRX coin price is $0.0615, but by the end of 2022, the average price for TRON is expected to be $ 0.0783. The forecast for 2023 also remains stable, and investors who are already in can look to either hold or add a little more to their positions. New investors can also look into TRX, as it is estimated that there will be around a 50% increase in price by the end of 2023.

WalletInvestor is an AI-based forecasting service. Their TRX charts and future forecasts are neutral-bullish at best for most of the current decade. They expect the price to decline to around $0.0480 within the next year, about a 20% decrease from its current value. They have no solid positive prediction for the subsequent years and have advised that investors be extra careful going heavy on TRON.

Long Forecast predicts a gloomy decade for TRON's price. Price is expected to slide even lower till the end of the year, with sharper declines to lows of $0.0600 and $0.0500 by the end of 2022. Not until 2025 do they expect any kind of bullishness, and even then, the $0.103 mark is the highest expected price point. This TRX price prediction doesn't bode well for current and potential investors.

DigitalCoinPrice is also quite optimistic about TRX's future as a viable investment option. It predicts that Tron will consistently trade higher, and by 2030, the token's value will rise to $0.340

Honestly, TRON is a project that many people don't like for one reason or another. Nevertheless, it has a very active and supportive community. Based on fundamental principles, TRX's future is auspicious and may be brighter than expected. A detailed roadmap and support from the gaming and gambling industries make the project's future promising. The area covered by TRX is continuously developing and has a lot of financial resources.

How high can TRON go

It's hard to tell for sure what heights TRON (TRX) will reach. Based on the price predictions, you can form your opinion about TRON's future. One thing is sure: this cryptocurrency won't stop there. The TRON Foundation is investing in its development, buying up in-demand companies. Bringing it all together, it becomes evident that the interest in the company and the cryptocurrency should increase significantly.

You can spend a lot of time trying to estimate this asset's prospects. One thing is clear: we're dealing with a company that is actively investing in promising projects and technologies. A professional team is directly involved in developing high-quality, next-generation products.

Given the fact that technology is taking up an increasing amount of space in our daily lives, the cryptocurrency industry will only grow. You can start investing in these technologies with us today. Our easy-to-use, high-quality and transparent product is tailored to your needs. StormGain allows you to buy TRON (TRX) today and make money with this promising project.