I have a PIN code

If you have any problems obtaining the PIN, contact your personal manager or our support service:

If you have any problems with obtaining a PIN code, contact your personal manager or support service:

The growing popularity of cryptocurrencies and blockchain technologies is leading to the sector's evolution. In the last year, the world has been swept up by two new areas of activity: DeFi and NFT tokens. We'll try to delve into what these are and what advantages they can offer.

Decentralised finance (DeFi) is a decentralised, publicly accessible and trust-free ecosystem of public blockchain-based financial apps/services. Ethereum blockchain is most often used as its basis.

Currently, DeFi assets account for about 4% of the cryptocurrency market's total capitalisation. But that's not the limit: This sector will continue to grow and develop thanks to a series of advantages. 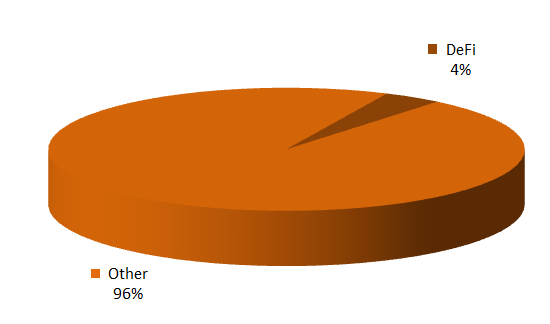 It's a good system because it covers almost all areas of financial services, including lending, creating derivatives and insuring risks. It performs all necessary financial actions but without banks' participation as intermediaries. This means that the need for additional costs disappears, and the speed of operations increases.

This is the system's key advantage. Decentralisation allows for control to be segmented, or distributed, to all participants across the ecosystem. What's more, the distribution is totally even. As a result, there's no overregulation, and all operations are absolutely transparent. DeFi systems are managed by smart contracts that clearly state the rules of the game.

Today, this system has a very wide range of applications. See the diagram below representing the ecosystem's segmentation by major segments. 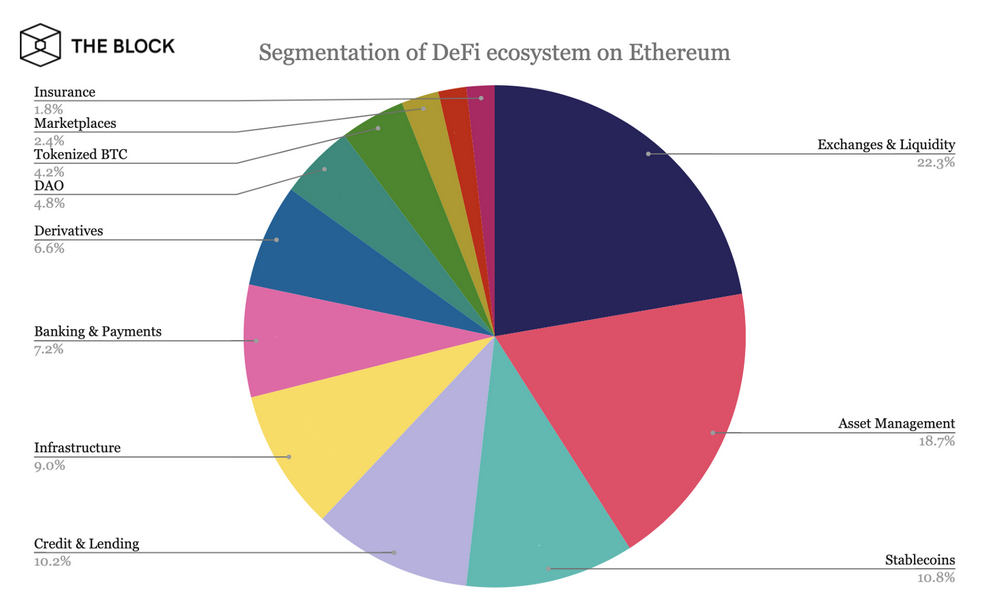 Decentralised stablecoins (cryptocurrencies whose value is tied to a base asset) are created based on this ecosystem. The MakerDAO project is a good example of this. It's a smart contract platform based on the Ethereum blockchain. It served as the basis for the decentralised stablecoin Dai's creation. Ethereum is used to support this stablecoin. Tokens are issued as follows: The user sends a certain amount of ETH to the smart contract, which releases the Dai.

Non-custodial landing protocols also make up part of this ecosystem. This feature allows users to loan or borrow crypto assets. One of the best known is the Compound protocol.
Platforms for issuing tokenised securities are also created as part of the DeFi system. At the same time, digital assets are issued in full compliance with the requirements of the legislation. That represents a higher degree of protection for investors and lower risk for issuers. These tokens have the properties of securities and comply with legal requirements.

Almost every DeFi service has its own tokens that allow you to invest in their particular industry. That makes sense since a growing number of companies are beginning to look for an alternative to traditional financial services.

NFTs are non-fungible tokens, which means the token is absolutely unique. This significantly distinguishes it from traditional tokens. For example, any Ethereum token is interchangeable with any other Ethereum token. But an NFT is one of a kind.

This type of asset first appeared in 2017. By 2018, it saw the first asset of its kind to drive hype, CryptoKitties, which allowed two NFT kitties to have another kitten that could either be sold or kept. One of these kittens was purchased for 600 ETH.

If NFT tokens initially saw games created for them, they have a slightly different application today. Tokens allow anyone to easily secure the rights to a unique digital object, picture, video or musical/literary work. In other words, NFTs allow you to buy ownership of the goods, but not the goods themselves. In this case, a token with the owner's data is attached to the file.
To attach a token to your work, you can use the OpenSea or Rarible platforms.
At the end of 2020, the tokenised art segment captured 31% of NFT's total turnover and continues to grow. Indeed, in 2021, the world was overwhelmed by the tokenisation wave artworks. The most sensational story comes from Injective Protocol, a company that bought the work "Morons (White)" by Banksy for $95,000 and subsequently burned it during a broadcast. After that, a non-fungible token was attached to the digital version of the painting.

DJ 3LAU tokenised his own album and sold it limited release, which earned him $11.6 million. Singer Grimes did the same, selling 400 NFT tokens tied to four drawings created by her and her brother and netting $5.80 million in NFT sales.

The emergence of an asset like NFT tokens can revolutionise copyright control. The tokens' unique nature can also increase the security of real estate transactions. When considering that both the buyer and seller can avoid intermediaries when working with tokens, thus making the transaction faster and requiring less overhead expenses, it's clear that this area will evolve further. That, in turn, means new opportunities for traders will also open up.