Despite the mixed news climate, the majority of cryptocurrencies managed to make gains this week. Nevertheless, there were some coins which bucked this trend. These include Stellar, which lost 7.35%. Ethereum was the true leader of the pack, rising 16.81%. Bitcoin Cash was able to gain 7.49%, while Bitcoin Gold was up 4.74%.

The crypto market received some bad news in the form of reports that network operator Vodafone is to pull out of Facebook's cryptocurrency project. The multinational conglomerate quit the Libra Association, citing its involvement in another project as the reason for its departure.

It was the official sector that brought the biggest positive developments. A series of central banks and the Bank of International Settlements announced that it was forming a focus group to discuss the possibility of creating its own cryptocurrency-based payments system. A short time after, the Bank of France announced that digital currencies could be useful, provided that they are issued by central banks and not private companies.

This week's coin to watch: 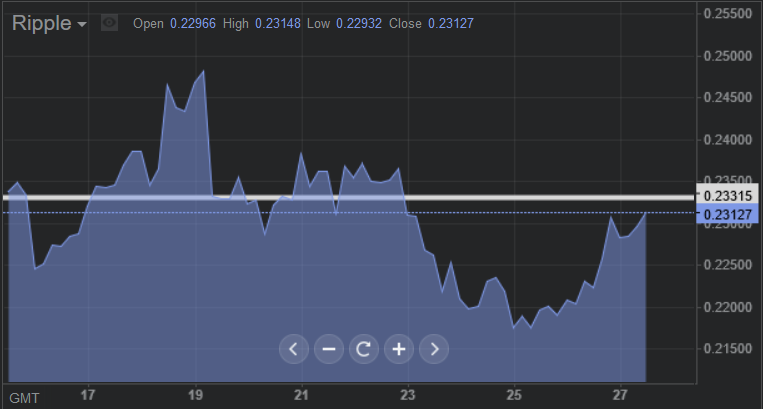 Cryptocurrencies are on the up. The driver behind this growth is a combination of positive news and various sector-specific factors. Ripple CEO Brad Garlinghouse announced that the company could go public within the next 12 months — a move that would certainly have a positive impact on demand. In addition to this, crypto payment processing firm BitPay added XRP to its list of supported currencies. The company first announced its intention to begin working with XRP in October 2019. From a technical analysis perspective, Ripple will be a good buy if it can break above its resistance of $0.23315. A good local growth target for the coin would be $0.25000.

Open a position in Ripple

Bitcoin bounces back, shoots for over $9,000