Over the course of this past week, cryptocurrencies have performed reasonably well. Bitcoin Gold rose by 34.34%, while Dash grew by 35.98%. Cardano (ADA) also enjoyed a 12.05% increase in value. Despite the market’s current mixed-news climate, it appears as if the majority of digital assets opted to only react to positive elements.

One bit of good news for the market was the announcement that Facebook’s digital currency project, the Libra Association, had formed a five-person steering committee. The committee’s role will be to oversee the technical development associated with the upcoming launch of the coin, which is planned for late 2020.

There were more positive developments from crypto exchange Coinsbit, announcing that it is going to open a cryptocurrency marketplace under the name Coinsbit Store, where users will be able to purchase goods from AliExpress, Amazon and Ebay. The store is set to go live in April of 2020.

Among the negative news were reports that the South Korean government is planning to levy a 20% tax on all income derived from cryptocurrency trading. There has also been similar unfavourable information that the UK tax authorities are going to begin tracing any suspicious cryptocurrency transactions.

This week's coin to watch: 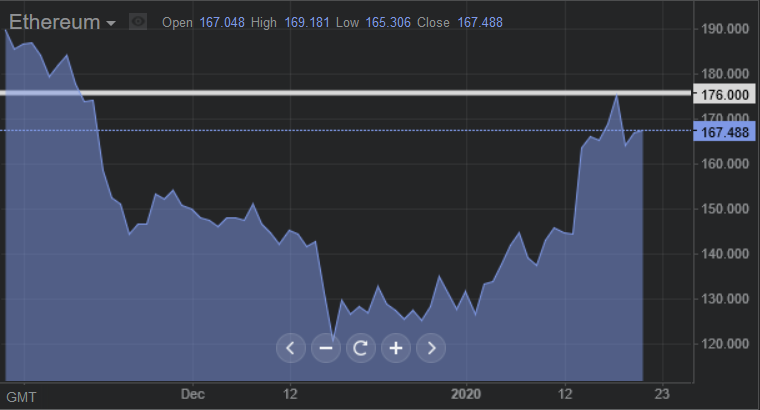 Cryptocurrencies have managed to exhibit decent growth in recent days and we could see this uptrend continue. The news climate would seem to suggest that this is possible.

Ethereum creator Vitaly Buterin has hinted at the possibility of merging Ethereum Classic and Ethereum 2.0. Furthermore, it was reported that the basketball club Sacramento Kings have signed a partnership agreement with the Ethereum development studio ConsenSys, in order to produce a sports gear auction platform built on the Ethereum blockchain. Looking at the technicalities, ETH/USD is currently not far off its resistance of 176.00. If it can rise above this mark, then that would open up a path for further growth to 192.50.

Open a position in Ethereum now

StormGain from inside, interview with the team: Vera Beliavsky, SMM Manager

22 Jan, 2020  2 min read
We're proud to present to you a series of interviews with StormGain team members, who are in charge of creating our cutting-edge platform.
Next article