The concept of trust has been integral to cryptocurrency since its inception. The same can be said of money itself. Blockchain was created as a technological solution to ensure trust on a peer-to-peer level. This desire stems from a lack of trust in third parties that act as guarantors of trust in traditional money, in other words, banks, governments and other economic institutions.

Therefore, it’s interesting to note the findings of the special cryptocurrency edition of Edelman’s Trust Barometer report, which was released earlier this week. Working with a sample size of 34,000 adults (18+ years old) across 28 countries, the survey carried out by the PR company is by no means comprehensive, but still offers some intriguing insights into the public perception of cryptocurrencies.

Edelman started its surveys in 2001, and since then, its annual reports have been a highly regarded barometer of public trust in social institutions.

On a more general note, its 2020 annual survey (published in January, before COVID-19 became a serious global economic shock), revealed plenty of concerns about technology’s increasing importance in the world economy. A majority of people felt that pace of change was too fast, with over 80% of those surveyed specifically worried about losing their job to automation. Over half the participants expressed doubt as to whether capitalism was working at all.

Almost 50% of people surveyed across markets in the cryptocurrency edition of the Edelman Trust Barometer report generally trust cryptocurrencies. By comparison, only 10% more people trust banks.

Blockchain trust by country also throws up some interesting contrasts and highlights some geopolitical realities. 34% of US respondents trust cryptocurrency, a slight drop from 2019. As the world’s biggest economy, the US is a highly coveted market among crypto firms, but with a decline in trust and a vested interest in protecting the dominance of the dollar, it could well be other countries that end up fuelling crypto’s future.

Over 80% of Chinese respondents trust crypto, a 10% increase since last year. Trust in crypto also jumped up significantly in Latin markets such as Argentina, Mexico, Colombia and Brazil. The native currencies of these countries have suffered a lot from depreciation against the dollar in 2019, so it’s no surprise that the US’ southern neighbours would look to crypto as an alternative to dollar domination.

Overall, only 35% of respondents believe cryptocurrencies and blockchain technology will have a net positive impact. Given the ideological motivation behind crypto’s founding, it still faces an uphill struggle to convince people of its noble intentions.

The US and China are also very split on whether cryptocurrency is a good or bad thing. Just 26% of US participants are convinced of blockchain’s potential for good, whereas China’s figure is 62%. 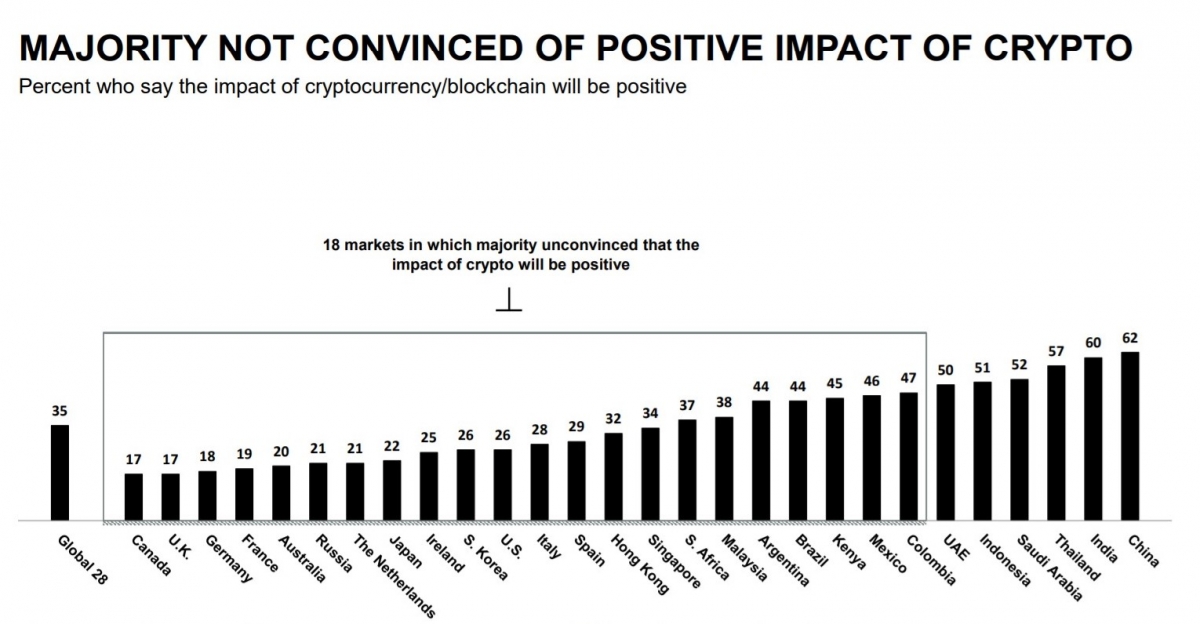 Given the Chinese government’s official support for blockchain research, and the imminent launch of the digital Yuan, it is China, rather than the land of the free, that emerges as the biggest champion for blockchain.

Perhaps the strong numbers in China are unsurprising when one considers that over 60% of respondents agreed that the cryptocurrency sector needs more regulation. This hints that in order to reach mainstream and adoption, cryptocurrency cannot always be opposed to governments and banks, but rather must find a way to work together to win public trust. This process is already well underway. It increasingly looks like blockchain will improve existing financial institutions, rather than replace them.

Overall, the trend towards mainstream trust in cryptocurrency is positive. Out of the 28 markets surveyed, only three saw trust in cryptoassets go down from last year, and it was only by a small amount. However, one of these was the US, whose disproportionate influence on the world stage cannot be discounted. We’ve just seen, for example, the SEC strike down Telegram’s TON project and gram currency. Indeed, the US doesn’t just have the ability to regulate itself, but the world. Time will tell whether increased adoption in other markets will eventually force the US to change its approach.

StormGain: invest in the future

Edelman’s survey goes to show that people are now coming around to the fact that cryptocurrency isn’t going away, and it’s going to be a part of our lives. Now, the question is how best to apply blockchain for good? The US, as a dominant financial power, is naturally more nervous about this potential for change, but crypto is all about empowering individuals.

And for any individual who wants a stake in the financial technology of the future, StormGain remains the best platform to use. Available as a user-friendly smartphone app or on the web, the award-winning platform enables users to easily buy a range of cryptocurrencies and trade with an up to 200x multiplier. StormGain also offers secure integrated crypto wallets to store your cryptocurrency, and the most generous bonuses for clients, including up to 15% bonus on deposits and up to 10% APR interest bonus on holdings.

Trust in crypto is building slowly but surely, and if you want to be in a strong position in the future, then the time to invest is now. If you’re ready to be part of the crypto age, it just takes a few seconds to register with StormGain and begin reaping the rewards, or to try a demo account for free.

20 May, 2020
StormGain takes to the pitch once again with our official sleeve partners Newcastle United FC for round two of StormGain Answer Time.
Next article

29 May, 2020
Top Chinese political advisers have proposed a new digital currency that could have interesting applications for the greater Asian region.